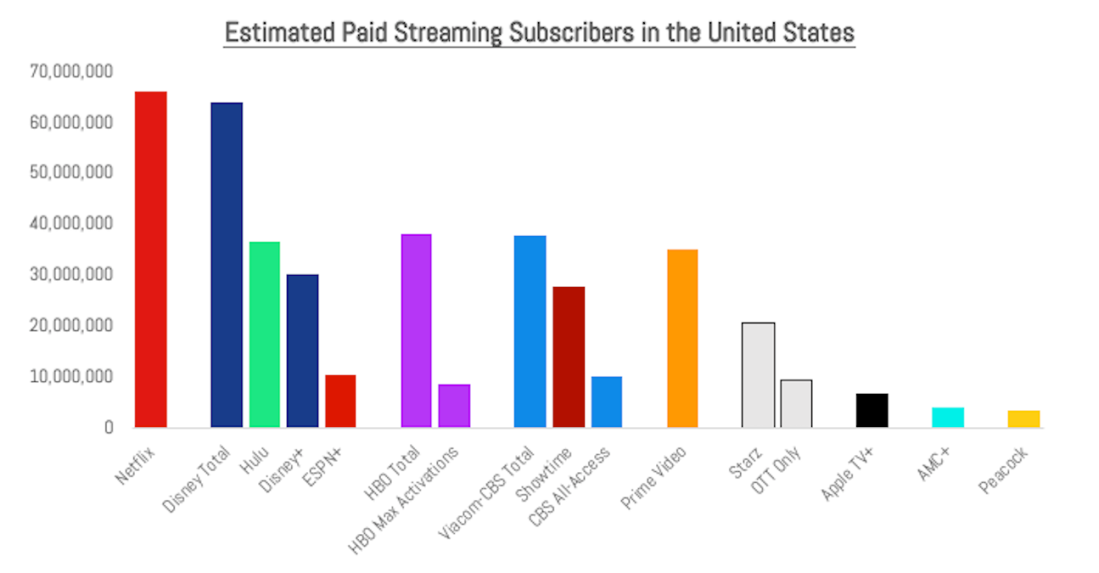 Let me tell you a pet peeve of mine. It’s folks citing how many Amazon Prime Video subscribers Amazon has.

Because they don’t know.

What you know, or have been told once, is how many Amazon Prime subscribers there are. With Prime comes access to Prime Video. We don’t know how many members actually use that service or, more importantly, know how many value the service enough to pay for it on a recurring basis. (What a subscription is, by definition.)

But here’s what’s crazier: we don’t even know how many Amazon Prime subscribers there are by country. They could have 50 million US Prime members…or 125 million. Literally know one knows. (In fact, we haven’t gotten an update on Prime membership since January.)

This is indicative of a larger phenomenon of the “streaming wars”. The streamers have barely told us how well they are doing. By my estimates, only 4 of the 12 biggest streamers have shared actual US subscriber numbers! (Hulu, ESPN+, HBO Max and Starz)

That’s right, due to non-disclosure, global-only numbers, or definitional craziness, we really can’t compare the streamers to each other in the United States.

I’ve decided to fix this glaring mistake. What I’m going to do is provide the EntStrategyGuy Definitive Estimate for all the major streamers US subscriber base. Today, I’ll provide my table, chart and some notes, then tomorrow I’ll provide the longer, gory details. First, here’s the chart:

And the table, which I’ll explain tomorrow:

If the internet weren’t a cesspool of clickbait, I could have just explained what this article is, “My estimate of US subscribers for the streamers.” But that doesn’t get the clicks. A flashy headline on Netflix? That does.

Tomorrow, like I will say multiple times, is where I’ll really provide insights into this process and data. For now, though, if you have one takeaway, it should be that the streaming wars are messy. They are filled with nuance. The more that someone online pushes a simplistic narrative (Netflix has already won; Disney+ will kill Netflix; TV is dead) the less you should listen. There are no simple narratives.

So my headline is 100% true, and building this chart makes that clear. When it comes to one single streamer in the United States, Netflix is about twice as far ahead as its nearest competitors. Really, they are in the first tier by themselves. Then there is a second tier of services with about 35 million subscribers (Disney+, Hulu, HBO Max and Prime Video). Then a third tier of folks trying to break into that second tier (Apple, Peacock, Starz, CBS, Showtime, maybe AMC+).

Yet, this look is in many ways a backwards looking view. The three oldest services happen to be the three oldest. The difficulty is forecasting what comes next. If we’re looking at growth, Netflix at the top was flat last quarter and down earlier in the year. And likely would have stayed that way all year in America except for Covid. Meanwhile, can the new streamers add subscribers? I think they can.

At least now, we/I have a common fact set to evaluate the United States performance of the streamers.

– What about global? I’m just focusing on the United States since many of these streamers are US-only. And we have the best data for this country. As the streaming wars continue, though, I’ll do a similar look for worldwide. (Though comparing global numbers to US only numbers is not a good method to do that.)

– Why didn’t “smaller streamer TBD” make the list? I set the cut off at roughly 2 million subscribers. Anything smaller would have made the chart difficult to read. Again, I’ll explain my rules tomorrow.

– What if you disagree? Well, tomorrow I’ll explain how I calculated each one, so if you want to adjust the estimates you can. That will allow you to disagree, but within the right zone of possible answers.

– [From Corporate PR] You got our numbers all wrong! One, if you don’t put them out, then no I didn’t. If any company wants to correct my math, send me three years of financial data and I’ll happily provide an exclusive update.

(This is the first article in a three part series estimating how many US paid streaming subscribers there are in the US. Read about how I calculated the numbers here or here.)