(This is the last article in a three part series estimating how many US paid streaming subscribers there are in the US. Read the numbers here, and the first half of the explanation here.)

If you’re wondering, yes, I deliberately wrote three (almost) contradictory headlines for the last two days. In one, Netflix is clearly winning the streaming wars. In the other, Disney is almost winning. In the third, the often second place streamer, Prime Video, got ranked in fifth place. What’s the reality?

Somewhere in between. Or somewhere else entirely.

That’s what the point is for these articles the last two days. Not just to see the current subscriber totals, but to understand the nuances between them. To understand how the numbers interact so we can not just figure out not just who is winning the streaming wars, but what could happen as they get more competitive in the next few years.

Today, I’ll continue explaining how I estimated each streamer’s subscribers, but let’s start with why I did this analysis. At the end, I’ll put some fun charts that summarize this analysis.

The Reasons I Did This Deep Dive

As I’ve been analyzing the streaming wars, it’s been increasingly clear that this is a war fought on a country-by-country basis. Netflix’s global growth is incredible, but it is only one, likely overrated, part of the story. The actual battles are in individual countries.

Given how big and important the U.S. market is, it makes sense to start there. Since I’ve been evaluating who is “winning” the streaming wars, I needed to know how everyone is doing in America. Subscribers are one of those key metrics. However, if you search the interwebs, you won’t find a reliable estimate for each streamer. Thus, I needed to build these numbers myself and if I was going to do the work, I should share it here.

Not to mention, I have a bias against using other folk’s numbers. My rule of thumb is that I don’t trust anyone. Especially if the source of a number is vague/uncertain/biased.

Lastly, I can do this analysis because I’m freed of some journalistic conventions. This website features my thoughts and analysis. Most journalists can only cite specific facts via companies or well-established consultancies/investment research. That’s what leaves most estimates wanting. Since I’m allowed to print whatever I want, I can mix estimates with facts. But I’ll just tell you the difference.

Analysis Continued: How I Determined Each Number

Time for some guesswork.

First, we have to find the number of Prime subscribers globally. (Itself unknown.)

Second, we have to figure out the proportion who are in the US.

Third, we have to figure out how many actually use Prime Video.

Fourth, we have to guess of those who use Prime Video, how many use it and would pay for it?

To start, I looked for US estimates of Amazon Prime subscribers and couldn’t find any numbers I loved. One firm does an annual survey, but they estimated 126 million US subscribers the same month Amazon announced 150 million worldwide Prime subscribers. That’s way too high then. However, the estimate isn’t for Prime subscribers, but folks with access to Prime. (Always ask “What is the ‘what’ in this statistic?”) So you could divide their number by 2.2 (for the number of people per household), and get the potential number of subscribers of around 50 million Prime subscribers in the US. That’s a floor.

On the other end, you could assume Prime membership is related to sales in a given country. Since Amazon breaks out revenue by United States versus Rest of World, we can see that here:

If that’s the high and low ranges, then what I’ll do is take Amazon’s announced membership in January (150 million), and use some nice round numbers. (And yes, I didn’t model any Amazon growth this year, so yeah, more unknowns on top of unknowns.)

The next question is how many folks actually use Prime Video. We could use third party sources for that—hang on a moment—but it’s worth building out the sensitivity table just to see how wide the range could be. I made a “Monthly Active” users sensitivity table to give myself a range.

If someone uses a service monthly, they are much more willingly to keep paying for it if they have to. (ie. if Amazon some how took Prime Video out of the Prime membership.) I also took a look at “annual active users”, but the range was too wide to be useful.

But I had one other piece of data floating around in my head. See, various streamers like Nielsen and Comscore track streaming usage. And Prime Video and Hulu have been remarkably close over the years.

That image is from earlier this year, when I wrote that “Netflix Is a Broadcast Channel”. In other words, if Prime Video has about the same usage as Hulu, it stands to reason it will have about the same number of folks willing to subscribe (at a $6 price point). Prime Video looks like it has grown a bit compared to Hulu over the last few years, but in general, they have about the same amount of usage.

What about the range? Well, you could convince me of anything. For my table above, I could see literally as few folks as CBS All-Access (say about 12 million). On the other hand, maybe folks do value Prime Video more than Hulu. So I could see it up to say 50 million US subscribers. (I just can’t imagine it is as valuable as Netflix when few folks watch nearly as many Prime Video shows.)

Starz, on the other hand, provided us all facts. In fact, some of the best facts of any of the streamers. While they have changed definitions a few time, they straight list out their past numbers. See?

Kudos for the transparency!

However, like HBO Max, the number of potential “streaming” subscribers is somewhere between the total of all linear and OTT subscribers, and the OTT subscribers only. You can decide where you think that falls, but I count them all for now.

Now back to the guess work!

Apple has had a good year for Apple TV+, but they refuse to release any numbers on its performance. Complicating things, Apple TV+ is also available globally. This was the same problem we ran into with Disney+, only with less data. The last leak we had was from Bloomberg in February, which estimated that about 10 million folks worldwide are signed up for Apple TV+, with the caveat that maybe half are actually using the service.

Time for the proxies. Since Apple TV+ is mainly for folks buying new devices, we’ll start there. If you want to analyze potential subscribers by iPhone sales, the best proxy for penetration, here’s the non-China iPhone sales numbers from 2017, according to Business Insider:

My logic for Apple TV+ was to take that rough percentage, and boost it slightly for the US, given that most Apple TV+ content is US focused. Then we’d add a 35% “Covid bump”. (Roughly what Starz and CBS All-Access saw this year.) Bingo, we get our guess of 6.8 million customers.

What about the range? Like Amazon, you could convince me of anything. The high could be all 10 million leaked customers were US based (or nearly so) and the Covid bump got it to 13.5 million. The low would be 2 million folks, all of whom are Ted Lasso fans. (The buzziest show among entertainment business Twitter after Succession.)

More facts from AMC. They’ve leaked that they expect their portfolio of streaming services to end the year at around 4 million US paid subscribers. To be clear, this is me cheating slightly since their premiere service AMC+ (which includes content from their other streaming services) may not have passed the 2 million threshold. I’m counting all their streaming subscribers, when you could argue they belong with the “niche” services. Still, they expect to pass the 5.5 million mark by the end of the year. So that’s the high point, with 4 million being the low.

(I haven’t written on AMC+ yet, but I am bullish on it as a “second tier” player. More to come.)

Last guess. Peacock has 22 million “sign-ups”, up from 10 million at their first earnings report after Peacock’s launch. So how many of those are paying?

But it’s likely small. Given that Peacock is advertising forward, the vast majority of users are likely interacting with it that way. (Of all the companies, I’d love this data point most of all. Well, maybe Apple TV+, then this one.) So I built a sensitivity table, and picked 15% as the number that made sense to me. I’d say the floor is 2 million (just making this list) and up to about 20% of subscribers, or 4.4 million subscribers, if folks are beating my estimates.

So with that, let’s make a few final fun tables. First, here’s the chart of my ranges of each estimate. In a lot of ways, this is more valuable than yesterday’s chart:

These ranges really tell us how wide the potential options are. Hopefully, we learn more over time, but you can see that the premium linear to streaming conversion will be an important statistic to monitor.

And now the confidence ranking table. 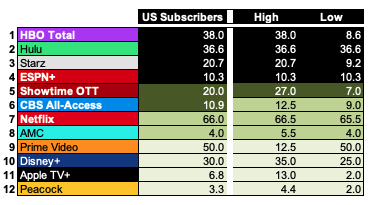 In other words, you can quickly see who provides clear numbes, who we can confidently estimate and who is the guess work.

Lastly, here’s my full table with the definitions and calculations explained:

So this provides a short hand way to know how I calculated the numbers.

Hope you enjoyed and again provide your estimates or feedback in the comments or on Twitter.