Last week, I used Nielsen’s top ten list to track their total viewership in April 2020 to April of this year. The question I raised, but couldn’t answer, was whether the decline in total top ten viewership applied to the rest of Netflix’s catalogue.

(Which I wrote about yesterday.)

As I explained, The Gauge is a new tool that track total usage across linear and digital TV set viewing. (But only TV, not including desktop and mobile viewing.) Nielsen further breaks out total viewership (in percentage terms) by streamer. This isn’t totally new, as Nielsen publicly disclosed these trends in both Q4 of 2019 and Q2 of 2020. Since we have a trend line, that makes a great candidate for the “Visual of the Week”:

To Answer the Question: Streaming Grew from 25% of TV set Viewing to 26% of Viewing

So to answer my question from last week, it looks like the 40% decline in the top ten viewership was a Netflix issue, not a streaming issue, since streaming’s share of TV viewing grew.

That said, the Gauge doesn’t use absolute numbers. Meaning as a society, last year, everyone could have watched 10% more TV period. (Netflix has estimated daily TV usage at 100 million hours. So say last year it was up to 110 million hours, and this year its back to 100 million.) That would mean that while streaming grew its share of TV usage, total TV viewing shrank too. Without absolute numbers we can’t say for sure.

But we can say that Netflix’s share of streaming viewership did slip.

The Downside for Netflix: Their Usage Does Seem Down

Yes, I’m being flashy with the sub-header, but really Netflix’s share of all TV viewing reached 8.5% last June when customer used the Covid-19 lockdowns to binge Ozark, Extraction and a few other films and shows. This led to a huge increase in subscribers for Netflix at this time last year.

Since then, Netflix has regressed to *only* 6% of TV set usage. Even though total streaming usage is up year-over-year as a percentage of TV viewing—growing from 25% to 26%—Netflix’s drop is even bigger—34% to 23% of all streaming. Moreover, going back to the end of 2019, Netflix has only grown their share (in the US) from 5.9% to 6% of all TV set viewing.

The Upside for HBO Max, Paramount+ and Peacock

Meanwhile, the traditional Nielsen tracked streamers are basically flat. Disney+, Hulu, and Prime Video all stayed at the same percentages.

So who grew? The mysterious “Other” category, which went from 5.8% to 8%. Presumably, this is HBO Max, Peacock, Discovery+ and Paramount+ (and maybe Apple TV+). Sure, none of them are as big as Netflix—or likely Hulu, Disney and Prime Video—but they are growing their share. Youtube also did well, gaining from 5% of streaming to 6%.

A common comment I get is that, “Duh, of course streaming is down from the Covid-19 peak.” Which, yeah makes sense. But isn’t it good to quantify exactly how high that Covid-19 peak was?

Also, sure, we all knew Covid-19 would cause a rise in viewership. But if that’s true, then why were all the headlines last year about how Covid-19 “changed things forever”? Or that it had killed the TV bundle?

Here’s my point: Covid-19 was a world changing event that will impact on our lives and economies going forward. But just how profound those changes are remains to be seen.

Want more looks into “total usage” of streaming platforms? I have a few good articles for you…

First, here is my first look at “Netflix is a Broadcast Channel” with the details for how I calculated my initial comparison to broadcast primetime viewing. I then followed up with an insights piece here. Later last year, I updated the numbers again.

Second, if you like estimates of total subscriber bases, my most popular series of all time, analyzed that last November. 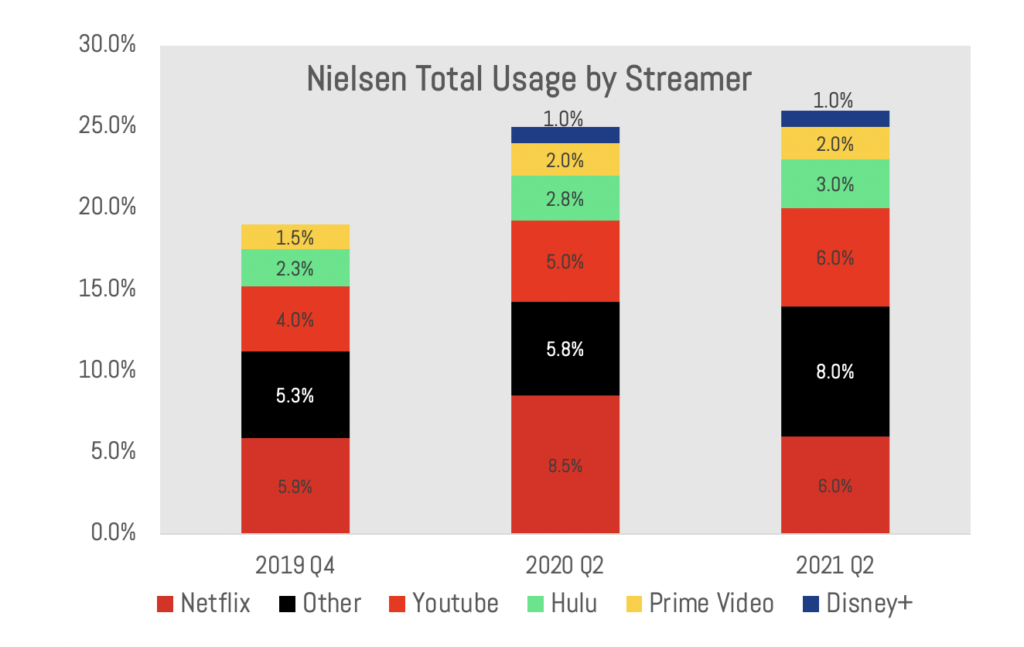 PrevPreviousStreaming Ratings Were Down 40% in April
NextHow Come Netflix Only Revises Their “Datecdotes” Upwards?Next