A few years back, working at a major streamer, I tried to make the case that at some point Nielsen (and others) would tell the world how many folks were watching our shows. As a company, we were focused on preventing that; the currency of viewership would be a highly guarded company secret. (Not much has changed for any streamer since then, really.) I thought this revolution was coming and coming quickly.

I was a bit too aggressive in my prediction.

Usually, I’m fairly conservative on trends taking over. The future is happening, but slower than you’d guess. (Take a look at the death of cable for how slowly this can play out. Some analysts claimed cable would be dead by 2020!) The “streaming ratings revolution” that I saw coming in 2017 took until 2020 to really take off.

But since March 2020, what a take off! I’ve started calling the proliferation of data about streaming viewership, “the streaming ratings era”. Between top ten lists, Nielsen ratings, countless analytics firms, we have regular reporting on what is popular in streaming.

And each week we get more and more data to parse. This week, Nielsen rolled out a big new recurring feature. Let’s explain it as much as I can, but first let’s start with why this is a big deal.

Competition – What Will Nielsen’s New Measurement Tool, “The Gauge” Tell Us About the Streaming Wars?

In short, it can tell us who is winning.

For all the focus on the changes in the streaming wars from the linear cable—weekly releases versus binge, ratings in the demo vs episode completion, subscriptions not advertising sales—at its core, the streaming wars will be fought and won in the same ways as the broadcast and cable wars:

Of course, this hasn’t stopped headlines from major outlets asking, “Does it matter if shows and films are popular?” Just today, I read a newsletter citing streaming executives claiming (anonymously), “We don’t really need to know if a show is popular are not.” Of course, you’d say that if you’re shows are unpopular!

This is kind of baffling.

If you look back at the dominant—and lucrative—winners in TV, popularity is the driver. NBC had “must see” TV in the 90s…which was must see because their Thursday night lineup was arguably the most popular night of TV in TV history. CBS dominated the 2000s in broadcast by again having the most highly rated shows. What about ESPN demanding the highest subscriber fees of any channel in history? It was and is the most popular destination for the biggest sports. Even HBO’s success is attributable to popular prestige shows: The Sopranos, Sex and the City and Game of Thrones.

Of course, how we define “popular” changes and evolves. At one point, live viewers were the only metric. (Though even then total ratings versus ratings in the “demo” could reveal different popularities.) DVRs changed this, moving live viewing to Live+3. The emergence of cable lowered the bar for the total viewership needed to be a “hit” too. Streaming changed the metrics again: unique customers, total hours viewed and completion rates matter now.

But ignore the specifics. In each case, all the metrics tie back to the same point: how many folks are watching a given show?

As my introduction explained, since March of 2020, the number of companies providing streaming ratings data—of some sort or another—have exploded. Thus far, they’ve mostly been focused on individual shows and films. Nielsen’s new tool—The Gauge—will provide the “total” look. Meaning if you look at all customers viewing of all TV, who has the largest share.

The Data 5Ws: What is The Gauge?

According to Nielsen, it’s a “monthly total TV and streaming snapshot”. After reading the Nielsen provided information, here’s my “5W” breakdown.

What – Total TV Usage
What – Via televisions (sometimes called “living room”)
Who – Provided by Nielsen
Who – By source (cable, broadcast, streaming and other)
Who – By streamer (Netflix, Disney+, Prime Video, Hulu, Youtube, Other)
When – May 2021
Where- The United States

(Learning point: whenever you stumble across a datecdote, anecdote, factoid, or chart/graph/visual, I highly recommend figuring out the 5Ws. Yes, lies, damned lies, and statistics and what not. The solution is to understand the data.)

The big change is that Nielsen used to report this data in their quarterly “Total Viewership” reports. Now, they’ll release “The Gauge” monthly to allow us to track the shift from linear TV to SVOD, and the shifts in market shares for streamers.

Context: How Has Streaming Usage Grown Over the Last Few Years?

Of course, if we’re going to be monitoring this going forward, it would be great to know what has happened in the past.

While a new monthly report is new, Nielsen has been flirting with this total view for a few years. For example, in Q4 2019 and Q2 2020, Nielsen’s Total Viewership Reports included breakdowns of streamers by total usage and estimates of streaming’s percentage of total living room TV time. Here is a chart I created last year reflecting this:

(By the way, I plan to update my streaming viewership totals look. But that will be out tomorrow in its own article.)

The Biggest Strategic Question: Is This Good or Bad for Netflix?

The overriding question with everything in the streaming wars is, for now, “What does this mean for Netflix?” They’re the company with the 1,800% stock price growth in the 2010s with aspirations to take over all of television, right? Indeed, the most popular “takes” seemed to be that this only cemented Netflix’s lead over the rest of the streaming pack.

Fair enough. But I actually think this initial data point, when taken with the context above, provides both optimistic and pessimistic conclusions.

Optimistically? Netflix is the industry leader in streaming and total usage is even higher.

Netflix has routinely told us in earnings reports they consider their usage to amount to about 10% of all TV viewing in the United States. But they calculate this differently than Nielsen’s The Gauge. They include living room TV, mobile and desktop viewing.

The good news is that Netflix accounts for even more “video” usage than The Gauge can see. (Likely all the streamers would benefit from this, with potentially Youtube as the biggest winner.) Add to the fact that Disney+ is still a fraction of Netflix’s total size, and they’re the toughest competitor, and you can see why Reed Hastings is so positive about his company’s position.

As the cable bundle inevitably declines, presumably Netflix can grow their position on The Gauge. I mean, they have to, right?

Netflix has been the dominant player in streaming, outspending everyone on scripted content, and still its growth has been, frankly, flat over the last few years? Here’s a table combining Netflix’s self-reported TV viewing estimates (in their quarterly earnings reports on three different occasions) and Nielsen’s over time. Note the trend:

One could argue that as the next generation of folks cut the cord—the late adopters and laggards—their content focus will be different from Netflix. Live sports and news may dominate their viewing. Or even worse reality television than even Netflix provides. Maybe the impacts of cord cutting will be broadly distributed.

Conclusions: What We Can/Will Learn

But overall, let’s just cool it with the hot takes. The Gauge will be a great tool, but it isn’t a great tool for conclusions…yet. To become useful, having a few months of a data—and really a year worth of it—will allow us to see meaningful trends, gauge variation month-to-month and tie individual show or film performance to larger term trends.

We’re not there yet, but we will be. Mainly, this is another great data tool in an increasingly crowded streaming analytics marketplace. 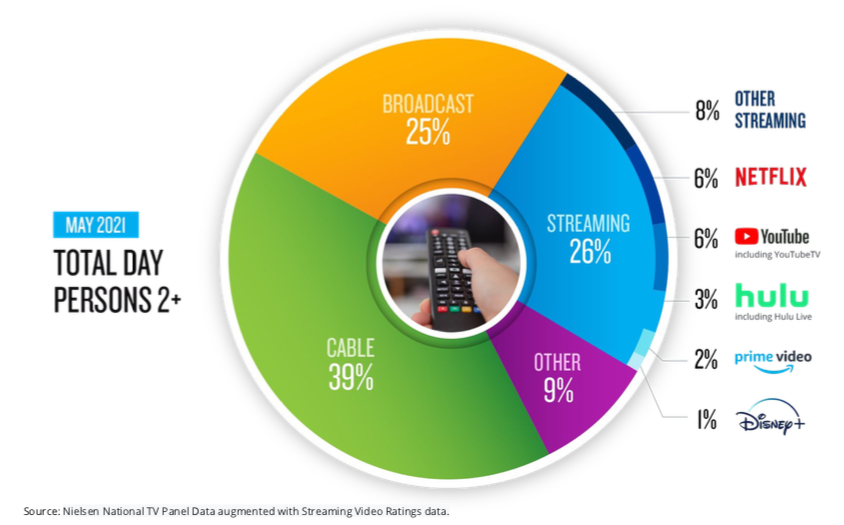 PrevPreviousHow Big is Hulu’s Biggest Hit?
NextWho Won the Quarter: “Shadow and Bone” or “The Falcon and Winter Soldier”?Next