Disney Has Almost Caught Up To Netflix in the Streaming Wars

(This is the last article in a three part series estimating how many US paid streaming subscribers there are in the US. Read the numbers here, and the second half of the explanation here.)

I’ve become a pinch frustrated with media folks who don’t differentiate between the US subscribers compared to global subscribers. Why? Because it violates the number one rule of data, which is to compare things “apples-to-apples”. Meaning, one should compare the most similar numbers to each other.

Not to pick on them because they do great work, but the wonderful Axios Media Newsletter (which reaches a lot more folks than I do) was guilty of this this week: 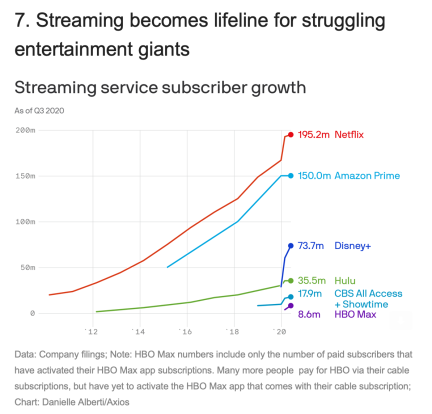 That looks at Netflix’s global numbers to HBO Max’s US only numbers. That doesn’t make sense, does it? Meanwhile, it’s compares Prime Video customers, who get it for free, to those genuinely paying for Netflix. And Apple TV+ can’t make the list since we know nothing.

So, as I wrote yesterday, I stepped up to provide some estimates for each of the major streamer’s US subscriber totals: 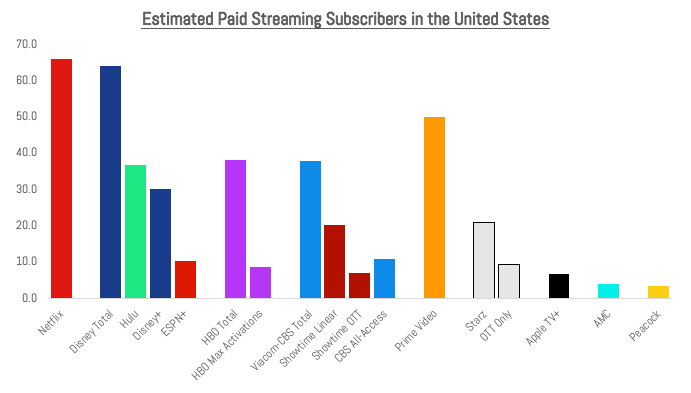 And the chart. (With some typos fixed from yesterday.) 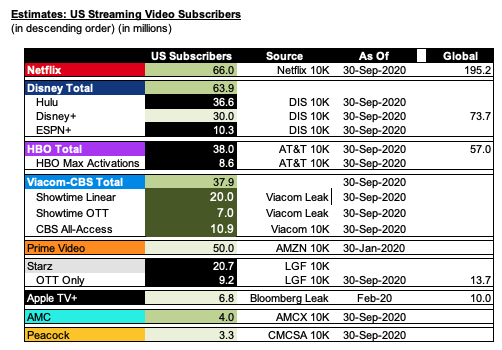 If yesterday is the data shot, today is the analysis chaser, describing the details of what I did and how. Which is just as important. If you read yesterday’s article, you’ll learn some statistics. If you read today’s—and yes it’s long—you’ll learn about what is driving these numbers.

We have a lot to get to over the next two days. Here’s the outline:

– The rules I used to estimate US subscribers.
– The confidence levels for each estimate.
– The explanation for each of the twelve major streamers.
– The reason for this deep dive. (Mainly the need for “apples-to-apples” comparisons.)
– Finally, a chart with the ranges for each streaming estimate.

(As a reminder, sign up for my newsletter to get all my writings and my favorite entertainment business picks from the last 2 weeks or so.)

In a quest to get to “apples-to-apples”, I had to figure out what type of apples we were dealing with. Here are the ground rules, in rough order of priority:

– First, US only. Global subscribers will come later.
– Second, subscription was the key. Free or advertising-supported services from Youtube to Pluto TV didn’t make the cut.
– Third, the goal is “streaming”, but I added “premium” channels too. Because frankly, lots of folks subscribe to HBO, Showtime and Starz directly. Ignoring that provides less context than more. So the premium companies made the cut. The linear channels paid through a cable bundle did not.
– Fourth, the goal is to focus on who “would pay” for a service. In other words, for Apple and Amazon, to try to figure out who would pay for those services if they suddenly cost money.
– Fifth, I had to draw a line somewhere or I’d have too many subscription services. I decided to focus on “major” services, which I defined as 2 million customers and above.
– Sixth, some services are very cheap as well, so I’m assuming roughly a $5 per month price point as the cut off. Yes, there are tons of discounts that get applied, but this is a good starting point.

My Confidence in Each Prediction Explained

Last year when I calculated how much money Game of Thrones made for HBO (a lot!), I realized I was dealing with a few different types of information. And I needed some categories to describe them. So I came up with this: 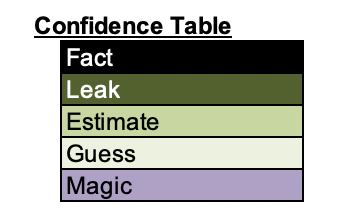 A fact is something a company has confirmed in a specific report or statement. Or in some cases ratings numbers and what not. Those are numbers we can believe in. Leaks are also from companies, but usually anonymous. They are fine, but always be careful with leaks. Companies are very self-interested and their PR folks—who are still good people—will mislead you. Specifically, with data that reinforces how well they are doing and hides any bad news. (The definition of bias.)

Estimates are predictions I am confident in. Usually it means I’m taking a few specific numbers and applying good models to them.

A guess, on the other hand, is usually when I have to estimate too many things. At which point my confidence in the estimate starts dropping. Which doesn’t mean educated guesses are bad, just uncertain. (Magic numbers are briefly explained here.)

Analysis: How I Determined Each Number

Enough preamble to the meat of this article. In order of the table above.

While Netflix discloses a lot of information compared to its streaming peers, on its US numbers it has become frustratingly vague. At the start of this year, Netflix decided to split the world into four territories to better show how its business is doing globally. Which meant for years we knew US subscriber numbers, but now those were bundled with Canada. Fortunately, they provided three years of data. Here you go:

In other words, US customers are about 90.3% of the UCAN total. That means we can estimate fairly well the current US subscribers based on the UCAN number. About 66 million US subscribers. Even though these numbers are so tight we probably don’t need it, I made a range for the estimate, and call this my 90% confidence interval:

(If you’re wondering where these numbers come from, I collected every Netflix subscriber number from here to olden times for this article. An update is coming next week as my “visual of the week”.)

Disney isn’t one service, but three. Two of those services aren’t globally available, which means we know for certain how many US subscribers they have. (ESPN and Hulu.)

What about Disney+? Well, we have our first tricky estimating process. To figure it out, I looked for some historical data. To start, here’s my historical growth chart: 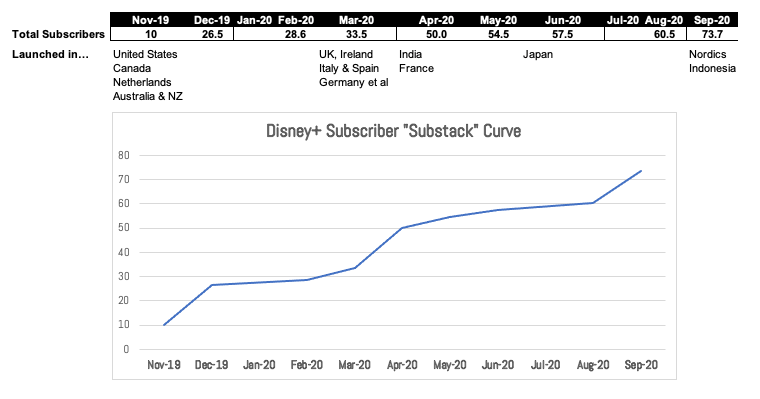 That helps, but not perfectly. The best way to estimate Disney+ subscribers is to use some correlated variable we do know, and assume the subscriber numbers are related to that. For example, if a country is 25% of the worlds population, then you assume they are 25% of the Disney+ subscriber total. The problem is that no one variable is perfectly correlated. You could use population, but some countries are wealthier than others. You could use GDP, but it doesn’t quite account for size. Broadband and mobile penetration are also potential options. Ultimately, I decided to compare all the countries by population.

Yet this has a big problem for Disney+. The big wild cards are India and Indonesia. While most of Western Europe and Japan have similar economies to the US, India does not. Fortunately, Disney leaked that they have 18.4 million or so (a quarter) of their subscribers from India. So that means we now have to parse out how many of the 55.3 million or so are from the US.

In this case, I looked at various populations of the countries Disney+ has entered, compared to the total size.

In other words, if countries adopted Disney+ simply by population, Disney has 40% of the population, so jeu would have about would have 22 million subscribers. That’s too low. When Disney first announced numbers in December of 2019, they’d have already been at 21 million subscribers using the population method. So did Disney+ only gain 1 million customers this year? With The Mandalorian season 2 and Hamilton? Probably not. So I made a sensitivity table, which netted me this:

Looking at it, the 54% of non-Indian subscribers having Disney+ is the most likely number. Or better phrased, between 25-35 million of all Disney+ subscribers are in the US. Any lower or higher feels unrealistic. And yes, I wish I had a more scientific way of triangulating this. Frankly Disney has released so little US data, and the data they have released has so many confounding variables that it’s probably the best we can do.

(Also, for the first of several times this article, if you want to disagree, feel free to do so in the comments or on Twitter and explain why.)

Yesterday, I also included the total unique subscribers by company, because I do think that is the best way to compare companies. (See the table above.)

Logically, if Disney could get to 50 million Hulu subscribers and 50 million Disney+ subscribers, and each was paying $10 a month—and those are numbers that are only possible 3-5 years in the future—then it would be hard to say they aren’t “beating” Netflix, if Netflix stays at around 65 million subscribers, but at a say $16 price point.

To be clear, I’m not predicting that happening. But that scenario is one of the possible futures. The fact that Disney has nearly caught up to Netflix with its three streaming services in terms of customers matters since it’s just starting out, even if average revenue per user is lower right now. (And yes, I only counted the “bundle” customers once for my summary yesterday. I assumed that all the ESPN+ growth, 6.5 million customers, since Disney+ launched was due to the bundle, which is a conservative assumption.)

HBO releases US subscribers and the number that have turned on HBO Max, which they call activations. The number of folks who would subscribe to HBO Max (if linear HBO disappeared entirely) is somewhere between those two numbers.

I’ll defend my lumping premium subscribers with streamers now. Frankly, I’ve never understood the logic of not comparing HBO linear subscribers to Netflix subscribers. Yes, one is direct-to-consumer and the other is sold through MVPDs. But ultimately, the customer is what matters. And HBO customers are very loyal. If the bundle goes away tomorrow, some customers may not continue subscribing to HBO, but more will. (And still do, frankly. HBO passwords are as borrowed/shared as Netflix, especially when Game of Thrones was on.)

As for the range, it’s between the activations and the total subscribers. So I provided both numbers. I’ll take the top of that range as my estimate (for now), but you can choose somewhere in the middle.

(If you want more details on HBO subscribers over time, check out my visual of the week from a few weeks back.)

If I was going to count all premium subscribers for HBO, it only made sense to do so for Showtime as well. Fortunately, Viacom-CBS has leaked quite a bit of details to the press over the years, and their financial report provides specific numbers for total streaming subscribers. (For this project, I searched for every number I could find.) For example, in September, sources told Joe Flint of the Wall Street Journal that Showtime had 27 million total subscribers, including 7 million OTT. (That’s a very useful leak, if accurate.)

However, unlike Disney, I didn’t try to disentangle ViacomCBS bundled customers at the company level. While Disney’s growth could easily be attributed to their bundle, it’s much less clear how many dual CBS All-Access and Showtime subscribers are out there.