One of my guilty pleasure TV series to watch is Forged in Fire on the History Channel. Like Making It, there is something really enjoyable about watching people make things, but especially when they do it really well. Especially in a positive atmosphere, which is what Forged in Fire and Making It emphasize.

Well, if I had a version of that hobby, it would be making business models in Excel. Especially bespoke models for brand new businesses.

I just love it. I love taking a blank spreadsheet and figuring out how to fill in every line. More importantly, figuring out the data behind each number to get a model to be as accurate as possible. That’s my favorite part of the job. I’d do it even if no one was paying me to do it. If I can do that for things I love—like Star Wars, the Pac 12 or Game of Thrones—even better.

These models don’t come cheap in terms of time required to build. Weeks of work usually. And the final result of even 4,000 plus words explaining them still usually don’t capture all the insights I think a well-built model provides. So—as I did with the Pac 12—today is the first article diving into all my extra thoughts on my Game of Thrones profit model.

I’ll dust off the FAQ format for it. If you have any questions, hit me up on Twitter, Linked-In or email (see the contact page) and I’ll answer those too.

First, can you remind me what your conclusions were?

Sure. In case you haven’t read the model, here is. It’s 35 lines and ten columns, so it’s small. (If you want the actual Excel, email me and I’ll consider sending. I’d have to clean it up first, though.) 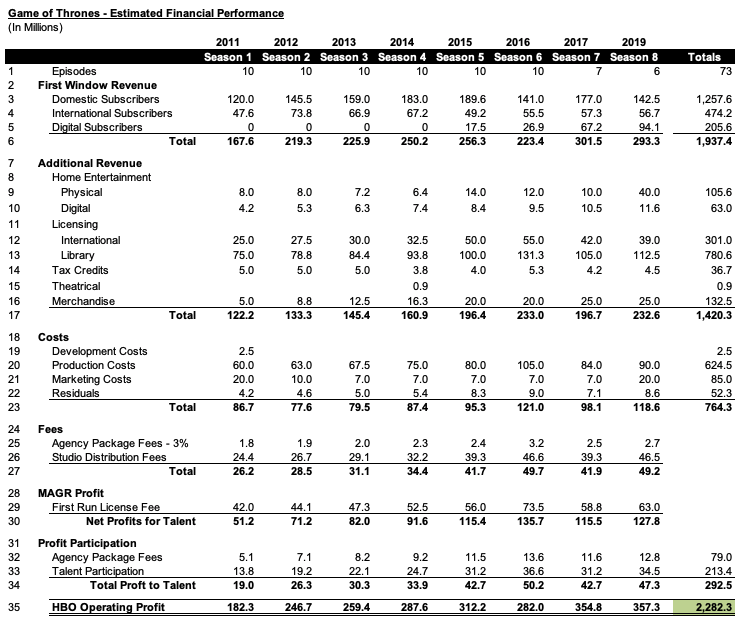 The conclusion again is $2.28 billion is my estimate for how much GoT made from this series. That’s what I’d call my “median” estimate if I were running scenarios on this. And again, it is an estimate, not “truth”.

What do you mean by “not truth”?

Most numbers reported by the entertainment press, in my experience, come from one of three sources: the companies (via earnings reports or leaks), bad surveys or an investment bank releasing their analysis. My estimate would best fall in that last category; this is my estimate of the future.

But estimates are just that “estimates”. Since I don’t have every input—what I’d call “the actuals” in an internal document—I had to make a ton of assumptions. Still, estimates like these can be damn useful training for anyone in business. Unless you employ an industrial espionage firm—and I’m not a lawyer but I’d recommend you don’t do that—you don’t have your competitor’s numbers either.

I expect there is a chance some people who are “more in the know” than me can get someone in HBO to give them the real accounting sheets. Though, as Michael Ovitz’ autobiography testifies, there are quite a few people in H*Wood willing to tell you they know something for certain, even when they have no idea.

Let’s get into the model. Starting with the subscribers section. Explain the difference between accounting profit and your projected profit

Well, the key is that HBO (and all TV producers of wholly-owned series) think of a show in two ways. First, what is the “accounting” profit. That’s the amount they need to pay talent. That is usually made in an agreed upon definition called a “Modified Adjusted Gross Receipts” (MAGR). The people who work at the agencies have this knowledge as does HBO’s finance team. If it was leaked to me, we could make these estimates way more precise.

(Same with Star Wars. Feel free, readers, to leak me any info you want.)

MAGR, though, doesn’t come close to capturing the true value of the series. The MAGR definition usually ties the first run license fee (sometimes called imputed license fee) to the production costs. This gets nowhere near the true value of a TV show. It’s so “sub-optimal” that in my articles on subscription revenue, it didn’t even get its own “not-explanation”. I just dismissed using costs as a stand-in for value. Here’s this demonstrated for Game of Thrones.

To quickly explain, to truly get at how “profitable” Game of Thrones had been for HBO, I needed to know how much subscriber value it added. Since this isn’t a hard and fast amount of cash—the way say theatrical box office or home entertainment sales are—networks like HBO usually set an agreed upon amount before the show airs. As you can see, it’s tied to the production budget of a series, usually at some percentage. Historically, 70% if the show can be sold to other windows.

As this table shows, though, if HBO had to pay off the actual subscriber value, then the talent collectively would have made something like $400 million more off the series. In other words, HBO was able to keep about $1.5 billion in profits from being shared with talent.

Is this a bad deal for talent?

I mean, not as much as it seems. Estimating the value of subscribers is pretty complicated, and if you let lawyers into that calculations, it would get messy pretty quickly. Arguably this only comes up for the biggest hit TV series anyways, of which there are less and less.

How did you come up with your percentage for the imputed license fee?

I did some reading on the numbers HBO had historically used, and this show happened so long ago—the deal being signed in 2008 time frame—that imputed license fees were generally much lower than they are in current deals. (Sometimes Amazon and Netflix go up to 130% of the production budget.) I did debate bumping up the profitability at the back end of the show, and may do that in a “high case” model later.

Okay, I get the imputed value. Have you explained how you calculated the subscriber value?

I have. First, on the original Decider article I mentioned that HBO has grown both their US pay TV business, their international pay TV business and their digital business. To implement my “optimal” method for valuing subscribers, I used this growth with my estimated Customer Lifetime Values for each type of business—

—Customer Lifetime Values? What were they?

But then I went into even more detail yesterday in my article describing how to value all streaming video, with Game of Thrones as my example. Here’s that link. The fun result was this table comparing attributed US subscribers to Game of Thrones viewers:

Where did the percentages of the retained and new subscribers come from?

Well, they are magic numbers.

A finance executive who I worked with at the “streaming-company-that-shall-not-named” was analyzing one of my models, and he keyed in on a specific number for the venture we were looking at. (I think it was either subscribers or viewers of a TV series.) And he said, so what’s your confidence in this number? And I said, “I don’t know.” He said, “Well it drives your model. That’s your magic number.”

Basically, the “magic number” is the number that usually pops up that means “success”. It could be viewers of a TV show, or units sold or something, but is is the success metric that you can try to guess, but can’t know for certain. And it often dictates success or failure of the model.

For my Star Wars series, the number of future movies is a big magic number. For the Pac 12 article, the value of the next TV rights deal is basically the magic number. For most models, I could find one and it’s a term of art I love now. (I’ll write a bigger explainer in the future.

What are the magic numbers for HBO in this model?

Oh plenty, but the biggest are the subscriber numbers and customer life time values. We know how many subscribers HBO grew both domestically and internationally. The question is how to attribute those to GoT specifically. If I had all of HBO’s data and a lot of time (with maybe a data scientist or two), I could calculate this very accurately. In the meantime, I had to use some guess work.

Also, my CLVs for HBO customers are pretty big shots in the dark. I like the estimates, but HBO studiously avoided giving us things like churn rate or average subscription length. And for good reason: more information is worse for Wall Street performance. Netflix avoids giving those numbers as well. Amazon is far and away the worst of them all with Prime Video. The best I had was the phenomenal Second Measure data.

Still, go to my article yesterday for all the nitty gritty details.

Any other fun things you learned about HBO’s subscribers?

Yeah, Time-Warner would historically release HBO and Cinemax subscribers combined. So that complicated a lot of the analysis since saying “HBO has 50 million subscribers” isn’t really accurate since both Cinemax and HBO Now fall in that bucket. Now that they combine digital too, it is unclear if the Pay TV side of HBO has really increased, or if anything declined with the Dish Network retransmission battle.