The Content Battles are Competitive in the Streaming Wars

An Introduction
Part I – Define the Battlefield
Defining the Area of Operations, Interest and Influence in the Streaming Wars
Unrolling the Map – The Video Value Web…Explained
Aggreggedon: The Key Terrain of the Streaming Wars is Bundling
The Flywheel Is a Lie!

For years, a lot of folks have assumed the streaming wars are the first type of war. Netflix started streaming in 2008, and got out to such a commanding lead it looked unlikely that anyone would catch them. And as I’ve shown in charts before, Netflix really is far ahead.

Netflix is so far ahead, some analysts say the war is over. (You know who they are, so even though I’m not linking to them, this isn’t a straw man argument.)

Of course, this begs the question: what type of war is this? Is this a Franco-Prussian War that is already over before it starts? Or a World War II, where Germany and Japan are doomed, they just don’t know it yet?

Over at Decider, I’m writing a recurring feature where I’ll take stock of the last month (or so) and declare a “winner” for the most popular piece of content. (The latest went up last Friday.) I’m in love with the concept, because it forces me to check in regularly with how well shows are actually doing. In last week’s edition, I got a TON of insights that one article couldn’t contain them all. So here is one for today:

The streaming wars are increasingly competitive.

In other words, I think the streaming wars will look more like World War II than the Franco-Prussian war. (Fine, enough with the war metaphors.)

If you want to know what separates the “bulls” from the “bears” on Netflix’s strategy/future/stock price, it’s this view of the war. If the streaming wars are already over, then Netflix is priced too low. If new entrants can gain audience share, then it’s a genuine competition. The last two months of data show an increasingly completive content landscape, and it’s a trend which will likely pick up stream. Let me explain why.

To start, we have more and more data to understand (American) streaming viewing.

Back in July, I mostly used Google Trends data to estimate what was the most popular film in America. I used some of the customer ratings too, but not much more. The problem is that each of these data sources can be noisy. Since then, though, the data situation keeps getting a lot clearer, as I wrote about in August:

– FlixPatrol is having their data consolidated by Variety VIP. FlixPatrol has shared their data with other folks as well. (They count Netflix, Amazon, Disney and other top ten lists around the world.)
– Nielsen started releasing SVOD Top Ten lists (though four weeks delayed) by total minutes viewed.
– And after Mulan came out a few companies gave peaks at their data, including 7 Park, Reelgood and Antenna. (They all measure in slightly different ways.)
– Parrot Analytics has been releasing their weekly top ten since last year.

Are any of these data analytics firms perfect? No. In fact, I have issues with each of them, ranging from questions about their methodology to questions about their sample size/make up.  Be assured, when the Entertainment Strategy Guy is reviewing a data set, I’m looking for outliers which make me question the data. If I see them, I’ll try to call them out.

Thankfully, most of the data sources are directionally aligned, meaning they are all likely measuring signal, not noise.

Next, all of the sources are showing the trend of more and more “non-Netflix” shows/films in the top ratings

I noticed this first when reading Variety VIP’s write up of 7 Park’s subscriber data from August and July. 7 Park analyzes wether a unique customer watches a piece of content, so it’s gives some insight into how many different shows are being watched by various customers. Here’s the data from August and September that 7 Park shared with me. This is measuring “audience share” meaning it doesn’t account for how much customer watches, simply whether a unique customer engaged with a piece of content:

That’s four different streamers in both charts. Hulu, Amazon and Disney+ each put a top show into the measurement. AA year ago, it would have been all Netflix red. Even Amazon wasn’t breaking through.

(A note on 7Park data: I do have some questions about their sample size. It may over-represent avid streamers, as the Apple TV+ usage is higher than I would have guessed. This applies to some of the other folks as well, such as Reelgood.)

Like I said, though, directionally this lines up with other sources. Yesterday Nielsen updated their latest Weekly SVOD Top Ten. For the first time since they launched in August, a non-Netflix streamer made the list. And not just one, two!

Again, Netflix is still the king. This is because usage makes it even harder for the smaller streamers to catch up, so Netflix owns 80% of the list. But the story isn’t about who is currently leading, but who is catching up. Here’s Parrot Analytics look at the current most “in-demand” series.

In this case, since they measure demand not simply viewership, the spread is much broader. This is driven by the popularity of a lot of traditional firm’s IP.

(Regarding Parrot Analytics, I have concerns their data overrates the conversation around super heroes and genre. It also lags a bit too much for my taste.)

The Viewership Wars are Joining the Streaming Wars

Overall, this change shouldn’t be too surprising. The battle for viewership and dominance of ratings has been the quest of TV channel executives since the dawn of TV. And the battle for the dominance of box office has been even longer.

Over both those battles, various channels and studios have taken leads. In the 1990s, NBC looked unstoppable. (Must See TV) CBS took over broadcast ratings in the 2000s by launching a series of “acronym” shows and Chuck Lorre comedies. In film, Disney took over box office in the late 1980s, then again in the 2010s. Even as most executives can’t sustain permanent advantages, everyone so often someone does.

Netflix is currently the leader. Can they retain it indefinitely? Probably not.

This shows up in the Reelgood data as well. Reelgood tracks audience behaviors on a range of services, but inevitably their customers seek a wide range of shows and films. Take this look from the week Mulan launched.

That’s everything from Disney films to films only on TVOD to Netflix Originals. In short, viewership is diverse in America. Netflix doesn’t own it all, even if it owns the mental headspace of many critics, analysts and decision-makers in the United States.

It seems clear that as more traditional broadcasters, cablers and studios launch their own streamers, they’re going to fight more and more for the streaming viewership audience. Ideally, if I had Nielsen’s data for the last two years, we’d be able to chart this rise. Ideally, I’d have Nielsen data for the last two years, and show that August or maybe last November was the first time a show made the top ten list.

But I don’t have that data and Nielsen just started releasing weekly top ten lists. Instead, I’m speculating here, but increasingly, it seems like the Disney’s, Prime Video’s and HBO’s of the world are launching the most popular shows in the world.

What Does this Mean for the Future? What Should We Look For?

Well, the streaming wars are going to be competitive. That’s what this means. The more shows that become “must watch” means the more services folks will need to own. Game of Thrones and Lord of The Rings prequels will fit this bill. Same for Disney’s big shows. And I think Peacock has the best chance of developing new additional shows that fit this bill since they have a track record of doing that. (Their library with HBO’s is also the strongest.) Don’t count out Hulu or Paramount+ nee CBS: All Access either.

This means that split wallets are likely to be the case in the future. I don’t think anyone should have a model that implies that Netflix owns 50% or greater of a customer’s wallet. Probably even less than 25%.

Obviously, this means that Netflix will be fine for the streaming wars. No one should say “Netflix killer” because they are clearly such an indispensable part of the streaming diet for so many customers.

Unless, of course, you care about the stock price. This competition means that Netflix can’t pull back on spending, because then the top shows chart will only feature more shows from other streamers. It also means they can’t raise prices or can only do so slowly. Given that Netflix has one of the mostly highly valued stocks compared to underlying economics, any situation where it fails to conquer all TV has a lot of downside.

If content is king—it is—this is a battleground to continue monitoring in the streaming wars. Looking at the colors on these streaming charts is key. If they stay all red, that’s great for Netflix. If they look like—pun intended—a peacock’s feathers, that’s good for the traditional players. 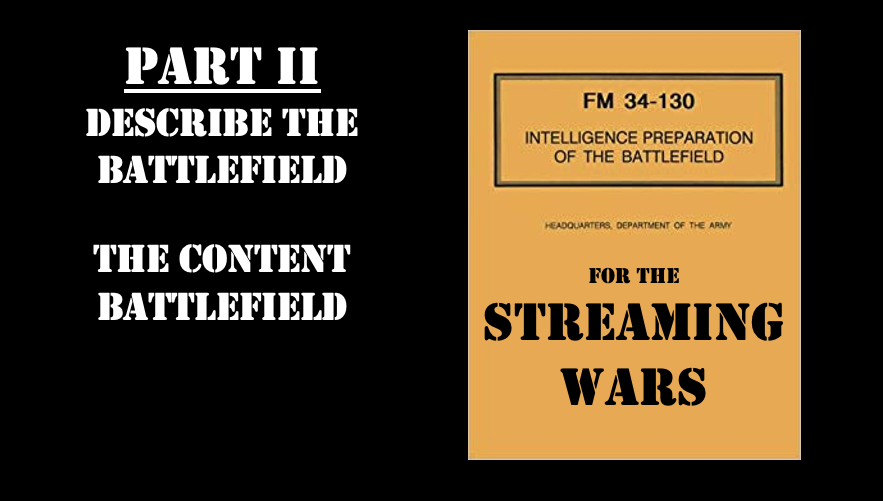 PrevPreviousShould Disney Have Released Mulan to PVOD?
Next4 Insights on Disney’s Content StrategyNext