Defining the Battlefield – Areas of Operation, Interest and Influence in The Streaming Wars

An Introduction
Part I – Define the Battlefield
Defining the Area of Operations, Interest and Influence in the Streaming Wars
Unrolling the Map – The Video Value Web…Explained
Aggreggedon: The Key Terrain of the Streaming Wars is Bundling
The Flywheel is a Lie! Distinguishing Between Ecosystems, Business Models, & Network Effects and How They All Impact the Streaming Wars

Certain parts of the US Army’s IPB process have such a good correlation to business planning it makes me wish I had connected these two ideas—intelligence preparation of the battlefield and business strategy—earlier. (As a professor described me once before, I’m a sucker for frameworks and planning processes.)

Take this map from a Wikipedia page, based on the US Army’s IPB manual (available free/open source online, I was taught off an older version):

It’s a subtly simple concept: the area you are assigned (your area of operations) is part of larger area you can directly “influence”, but you still need to be aware of the even larger environment, the “area of interest”.

Today, I’m going to define the entertainment battlefield within those three terms. I have four rough categories: entertainment business, related industries, geography and regulatory environment. But first, let’s define these terms to make sure we’re all on the same page.

Defining “Area of Operations”, “Area of Influence” and “Area of Interest” in war and business

Let’s start with an example to illustrate this. Say you have an Army Brigade deployed to Afghanistan. (About 5,000 troops.) If they are assigned “Kunar Province”, that’s their area of operations (AO). The definition of this in the manual is (paraphrased) “the territory your boss gives you”. In practice, this means the place with all your troops that you defend, protect or attack into.

Of course, while your area of operations is “Kunar Province”, that brigade commander could influence a larger territory. This could mean being able to deploy their troops or fire artillery into the surrounding area. In Afghanistan, this would likely mean the provinces around Kunar, like Nuristan, Nangahar or Kabul. (Here’s a map of Afghanistan for reference. Kunar is the upper right.)

Of course, the commander can’t influence Pakistan directly, because it’s off-limits, but Pakistan can influence Kunar Province. (Specifically, by acting as a logistics base for insurgents.) Making it an “area of interest” the commander needs to monitor.

Do these lessons apply to business strategy? Absolutely.

Let’s use my default explanation of potato chips. The brand manager for Kettle Chips has “chips” as their area of operations. That’s their AO; they focus on managing and impacting potato chip sales. But they can “influence” the entire snack market. They’re fighting for shelf space against pretzels, nuts, healthy snacks and candy. Of course, the rest of the retail industry is an “area of interest”.

Most business leaders probably don’t think in these terms, but doing the thought exercise may reveal some insights into either blind spots or areas you’re spread too thin.

Since we don’t have a “battlefield commander”, our “area of operations” is up to me to define. As I said last article, I’m focused on digital video. This is the heart of the “streaming wars”. But I’ll include anything “digital” in this from streaming (SVOD) to ad-supported (AVOD) to virtual MVPDs to FASTs (free-ad-supported streaming). These “areas of operation” mean those things the digital players can directly control, including the apps they roll out, how they distribute those, the prices they charge, but most importantly, the content they put on those platforms.

I don’t have enough bandwidth to cover the entire world in this series. Though Netflix and Amazon have notably turned the streaming wars into a world war, with global launches in a hundred plus countries, the start of the streaming wars will be US-centric. The United States produces the most content and if its streaming companies cough, the whole digital ecosystem will catch a cold.

In this case, “communications”—my catch all for cellular, telecoms, cable and satellite connections to transmit data—is the key industry included in our area of operations. If you can’t distribute your content over the pipes, you can’t compete. So we’ll check in on the big players in communications like AT&T, Comcast, Charter, Dish, Verizon and Sprint/T-Mobile.

Regulation: The FCC (and Other Antitrust Regulators in the US)

Since our geography is the United States, the roles of the FCC, FTC and antitrust regulators could have a key impact on our area of operations. In the last twenty years, the trend has been toward lax regulatory footprint. Whether that continues is a key question for entertainment companies, and it’s coming right as the streaming wars kicks off. (Meaning November 2020 could be important.)

Defining Our Area of Influence: Video

The story of the streaming wars is really a story of the evolution of “video”. There are the traditional distribution methods (theaters, home entertainment, broadcast, etc) that are being disrupted by digital methods. What that means for us is that the giant conglomerates battling in the streaming wars can heavily influence these others parts of the value chain, even if that’s not the ground being fought for.

We’ve already seen the influence of digital video in one of the most important areas of Hollywood production: the price of content. Essentially, everyone is paying more for scripted TV series, with a parade of articles on how much more these cost every studio. Netflix—a digital only provider—started this push by its winning bid for House of Cards, but Amazon, Disney+ and now HBO Max are al competing to raise these prices even further.

When I roll out my “map” of our area of operations, I’m going to include all of the video ecosystem since it can so easily be influenced and influence the digital video space.

Just because I’m focusing on the United States doesn’t mean I won’t acknowledge the rest of the globe. Indeed, one of the descriptions of this battlefield is how certain firms paying for global rights—whether accurately valued or not—is impacting those content prices I just mentioned.

When it comes to what can really influence and be influenced, high income or high growth countries such as the European Union, Latin America, India and parts of Asia fall under this analogy. While lots of potential customers may live outside those limited territories, the bulk of near term streaming revenue will come from there.

Arguably, the tech firms are already inside the area of operations, but for this category I’m specifically referring to the new innovations in technology that can change the next generation of streaming. Digital video is already our battleground, but what comes next? Virtual reality? Artificial Intelligence? And how can the entertainment companies influence that in turn?

The European Union’s antitrust authority is the biggest influencer here. Already Google and Amazon are heavily trying to influence how they are regulated in Europe, to more or less success. Again, only some of these will impact our United States area of operations, but we need to monitor it.

Defining Our Areas of Interest: Other Entertainment Options

As Reed Hastings pointed out:

The other entertainment “areas of interest” then include video games, social media, music, live events and even books. (Watching prestige TV is the new great American novel, after all.) Anything that takes away from video watching time is a substitute that needs to be monitored.

In some cases, our players in digital video area also playing in the space. Disney publishes books and licenses for video games; Amazon, Apple and Google are entering video games, which Sony is already huge there. Some play in music, though that space doesn’t have as much combined synergy as it once did. (Warner, CBS, Disney and Universal all had music/radio distribution at some point in their lives. Only Sony still does in a major way.)

Here’s my lay out of this. If video is the center of a “Five Forces” analysis, these alternatives are all competing “value chains” that could all substitute for video:

Geography: The Rest of the World

Just because we can’t influence certain places doesn’t mean they won’t ‘interest” us. This is why most maps of “area of interest” during The Iraq War just circled the entire country. In this case, I’d circle the entire globe.

Of note, though, is China. Which could easily be shoved into the category above since Chinese capital has flooded into Hollywood (kind of?) the last decade, including Dalia Wanda buying a huge stake in Legendary and other theaters. Ultimately, though, China really is the forbidden kingdom: there are no streamers there because of Chinese regulation. This is why the streamers can’t really in the near term impact the digital video portion of China, but it’s a huge area of interest. (Yes, the theaters can go in, but that’s a traditional form of distribution.)

Retail is a source of revenue for every entertainment firm, but those licensing deals are one step removed from most actual firms daily operations. More important is how firms like Amazon, Walmart and Target even see video as a form of monetization. So we’ll keep an eye on retail trends, without really being able to influence them.

Conclusion: Put it All Together

With those four areas, here’s my first “map” of this series, the definition of our AO, area of influence and areas of interest.

Guess it’s time to zoom in our area of operations. After we define that, we can start to analyze the ground and provide some insights. 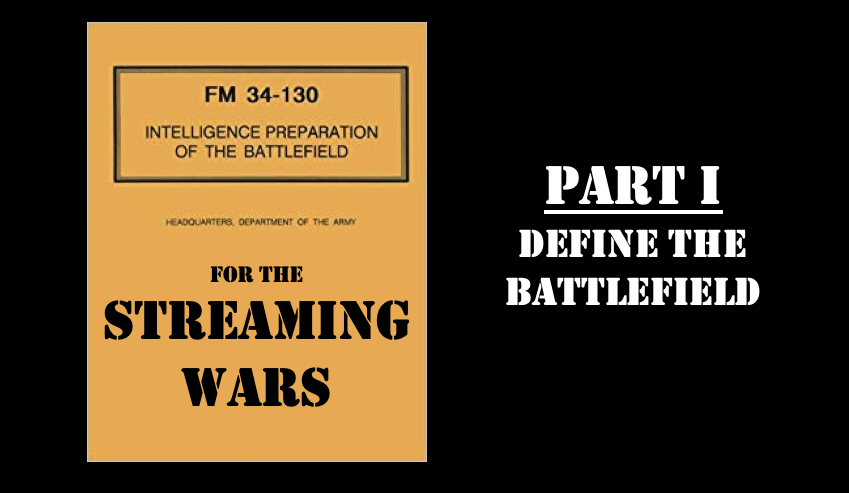