Introducing An Intelligence Preparation of the “Streaming Wars” Battlefield

An Introduction
Part I – Define the Battlefield
Defining the Area of Operations, Interest and Influence in the Streaming Wars
Unrolling the Map – The Video Value Web…Explained
Aggreggedon: The Key Terrain of the Streaming Wars is Bundling
The Flywheel is a Lie! Distinguishing Between Ecosystems, Business Models, & Network Effects and How They All Impact the Streaming Wars

As the streaming wars kick off this month, one question is dominating every conversation online, whether implicitly or explicitly:

As if this were a professional sports league. And only one studio gets the championship each year. Or even more extreme, like it is a war to be won. To steal a quote from Game of Thrones, “When you play the streaming wars, you win or you die.”

Listen, it won’t be that extreme, Mike Raab explained on Medium last week. Or as Alan Wolk has said, no one will “kill” Netflix anytime soon.

But if you’re an executive, there are plenty of questions about the streaming wars you still need answered:

– What is the landscape of digital video, and how is your company positioned?
– Who are the strongest competitors in digital video?
– What are the biggest economic, technological and regulatory forces facing streaming?

If you can answer those questions, you can then answer the most important question for your company, business unit or team:

– What should we do to “win” the streaming wars?

Frankly, what I described above is how an intelligence officer in the United States Army would approach the battlefield in a war. Before a military commander can decide what to do, she needs to know what she is facing. That makes this analogy between real wars and the streaming wars fairly apt. The biggest change is we’ll change “win” to “create or capture value”.

So if we want to explain the streaming wars, we need someone versed in both intelligence planning for the military and the economics of streaming.

Introducing: The Entertainment Strategy Guy’s “Intelligence Preparation of the Battlefield” for the Streaming Wars

As the streaming wars kick off in earnest, it seems like the perfect time to reflect more broadly on the streaming war, going a bit beyond my weekly columns and analysis. There have been some great layouts of the industry the last few months, but none that captured everything I’ve been seeing (with my own unique nee skeptical) take on the industry.

So that’s my job for November. A lay out of the streaming video landscape. An explanation of the business of streaming. An intelligence briefing for the streaming wars. Since I used to make those for the US Army—a story for another time—that’s the framework I’ll use to organize my thinking.

What is an “intelligence preparation of the battlefield”?

In truly US Army fashion, an acronym fills in where regular words will do. So Intelligence Preparation of the Battlefield becomes IPB.

An IPB is both a process completed by a staff (the IPB planning process) and the product(s) that results, usually a powerpoint presentation, but sometimes a document or brief. It also usually results in maps and graphics. It can also include a plan to collect further intelligence.

The strength of an IPB is the clear process. For a bit now, I’ve been collecting thoughts on specific companies and larger issues in the streaming wars, but I didn’t have an organizing framework. The IPB process provides that. It’s a great tool because it’s flexible enough to be used by intelligence officers from small battalions to gigantic corps managing entire theaters of war, in situations involving a pitched battle with tanks in the desert to combating insurgencies in the jungles.

Or in our case, the streaming wars.

Which battlefield in the streaming wars?

Crucially, I need to pick which battlefield I’m analyzing. The streaming wars will be a global war, but I’m going to start by focusing on the United States. Frankly, each country probably deserves its own analysis because of its own unique situation. But we have to start somewhere and I think covering the entire globe will be too tough for one month.

Moreover, even in the United States, I’ll be focusing on digital video. Meaning streamers, bundlers, aggregators and virtual MVPDs. But digitally distributed. Broadcast, cable, theaters and home entertainment are all interesting, but for a future analysis.

With that, let’s explain this tool. (By the by, if you want to download a copy yourself. The U.S. Army hosts them online.)

Intelligence Preparation of the Battlefield…Explained

An IPB consists of four parts:

Let’s define a few terms to unpack that simple four step process. In previous iterations, the operational environment was called the “battlefield”, but that wasn’t an acronym so the Army had to change it. We’re going to stick with “battlefield” since it is so much clearer of a phrase to use and “IPOE” just doesn’t sound right.

The battlefield is where your unit is conducting its operations. In a lot of was this is the military analogue to properly defining the problem. If you don’t know where you can and can’t operate, you can’t properly plan. It’s also particularly important in the military context because knowing where fellow military units are prevents friendly fire. (It’s a simple leap to make an analogy to a giant conglomerate with competing business units here.)

Once you know the battlefield, you then describe it. For the Army, this usually means three areas: terrain, weather and civilian considerations. Weather is just weather. But the terrain is what most Cold War military veterans were raised on, and it was summarized by the acronym OACOK: Obstacles, Avenues of Approach, Cover and Concealment, Observation, and Key Terrain. After the post 9/11 wars, when counter-insurgency became a thing again, the civilian part of the OE was described with ASCOPE or Area, Structures, Capabilities, Organizations, People, and Events. We’ll use different tools to describe the streaming war’s battlefield.

Next comes the threat. In the olden times, the Army called this the enemy. But then insurgencies were filled with political and non-violent actors, so this became “the threat”. During the evaluation part of IPB, you basically ask, “How dangerous are they? How many of them are there? What weapons do they have? What can they do?” When the Russians were the main bad guy, this meant a lot of maps with graphics describing effective firing ranges for artillery and machine guns and what not. For insurgencies, it meant capturing a lot more data about the relationships of society. The best word to capture this is “capabilities”.

Finally, if you know what the threat can do, an intelligence officer then tries to predict the future. This is the biggest leap of the process, when they answer the questiong, “What is the enemy/threat going to do?” That results in “courses of action” the enemy could take. Usually, this boiled down to two: the “most dangerous” and “most likely” course of action.

(If you want to know why I loved using this tool, this is one example. Even as I was writing about the streaming video landscape, I didn’t even consider making courses of action for various companies, even though it is implicitly what I’ve been writing about. A breakthrough!)

Obviously, we’re not seizing and holding “key terrain” against an enemy in the streaming wars. My plan is to translate this tool into business and/or entertainment business terms. Which means we need some translation. Consider this the guide to this series.

Part I – Define the Battlefield

Was: Map with Area of Operations/Area of Influence
Is: Value Web

Even in irregular wars like Iraq or Afghanistan, war is still a very “physical” thing. It’s all about people in space. Streaming video is not that. Nor is business. But while it’s not physical, the relationships among types of businesses in value chains is key to understanding the business landscape. That’s what I plan to map in Part I. Moreover, as I define the “Area of Operations”, I’m going to limit our battlefield, just to keep this analysis reasonable in length.

The relationships between various parts of the value chain are key to understanding how the streaming wars will unfold. I have a few tools to help do this including: Porter’s Five Forces, Value Chain Analysis, Structure-Conduct-Performance framework and, frankly, economics. In this section, I’ll unveil a few theories I have about how these forces will impact the various streaming companies. (This part will be fun and controversial.)

Frankly, enemy firing distances don’t matter here. What does is the various strengths of each streaming video and entertainment conglomerate. I could think of dozens of different ways to evaluate this, but ultimately had to settle on six variables that for me capture each companies’ strategic capabilities: their strategy (or lack thereof), the four factors of digital video (a new idea), and the financials. I’m calling this an S4F analysis.

Was: Most Likely/Most Dangerous COA
Is: Scenarios and Courses of Action (announced, merger opportunities, etc)

As I said, before I thought to apply the IPB process to this analysis, I would have stopped at the video value web and digital video power rankings. But this is really about predicting the future, which is fun. The difference between war and business is that sometimes companies just tell us what their strategy is. Indeed, Disney, Apple and HBO did that this year. So I’ll explain “announced courses of action” along with potential variations to those plans.

However, I’m also going to try to run those courses of actions through various scenarios. How they could succeed or fail. Essentially each company’s best and worst case outcomes. I’m calling this “scenarios”. This is a variation on IPB planning, but doctrine was made to be broken.

Conclusion – A culmination of the last 18 months

As Disney+ and Apple TV+ launch this month, it’s a good time to reflect on how much the streaming wars will change video in the next 5 years.

I’ve now been full-time writing for the last 18 at The Entertainment Strategy Guy. That full-time process has given me a much deeper understanding—though far from complete—of the current entertainment landscape than when I started, and especially when I was day-to-day obsessed with my previous employer. Sure, I knew what competitors were up to–and business school gave me the tools to analyze this industry–but writing a weekly column gave me a lot more focus on how this industry is evolving. 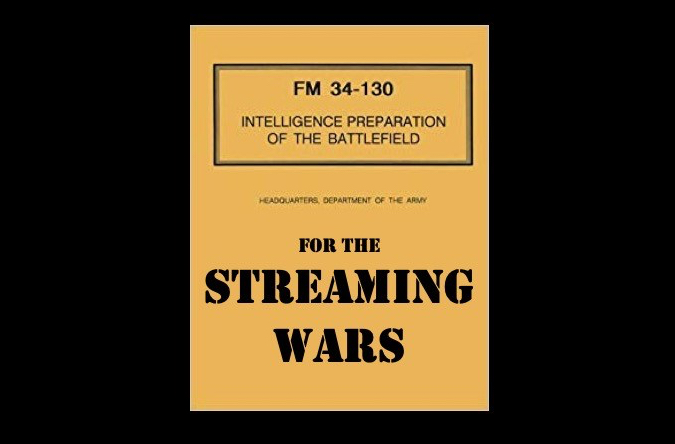 PrevPreviousThe 2019-2020 NBA-to-Entertainment Translator: The Update
NextDefining the Battlefield – Areas of Operation, Interest and Influence in The Streaming WarsNext