Jupiter’s Legacy: Bomb, Flop, Hit or Something in Between?

Not since the film 2010: The Year We Make Contact—a 1982 sequel to 2001: A Space Odyssey for those not versed in obscure 1980s science fiction—has something Jupiter-related caused this much consternation. On the one hand, Netflix is touting Jupiter’s Legacy as a success that will birth an entire universe of content; on the other hand, it got cancelled.

Well, conundrums like that are what this streaming ratings report is here to solve!

(Reminder: The streaming ratings report compiles data from Nielsen’s weekly top ten viewership ranks, Netflix datecdotes, Top Ten lists, Google Trends and IMDb to determine the most popular content. While most data points are current, Nielsen’s data covers the weeks of May 10th to May 16th.)

The confusion over Jupiter’s Legacy seems to start with the fact that it “won the week” for Nielsen’s ratings. Here are a smattering of headlines showing the cognitive dissonance:

The second confusing part is that Jupiter’s Legacy gained viewership week-over-week. You can see that bump above. If you just glance at Nielsen charts, this would seem like it could be gaining stream.

As I described last week, I’m calling this the “Binge Release Curve”. A movie or series opens, gets a big second week bump, then sees a big drop in week three. Essentially, this is a curve that exists because Nielsen’s weekly measurements start on a Monday and end on a Sunday. Thus, a series or film that starts on a Friday seems to get a bump into the second week, then sees a sharp decline.

Partly, this curve exists as an artifact of how Nielsen releases weekly streaming reports. If we could track viewership by day, we’d see that viewership peaks on the first weekend, then declines every weekend after that, with less viewing on weekdays. If this seems a lot like the decay of theatrical films in theaters, you’re correct. A different measurement—which I use for film—is “viewership per day”. Here’s that for Jupiter’s Legacy and Shadow and Bone.

But remember, that’s the average each week. A better way to think about that is if each viewership was per day. So look at it like this:

Enough how the sausage is made, let’s slather on some sauerkraut and eat this thing: is this good viewership or not? I’d say it’s not a bomb, but since it needed to be a hit—because of the huge budget—it isn’t that ether. So maybe a flop? And flops get cancelled.

To have been a bomb, really the series would have needed to miss taking the top spot on this list. When we think of all-time bombs at the box office, for example, we think films that missed the top spot on their opening weekend, like John Carter, The Lone Ranger or In the Heights this last weekend. Avoiding that means this can’t be an all-out bomb.

That can still mean this show missed expectations, like a big, theatrical tent-pole film that wins the weekend, but doesn’t get to $1 billion in today’s worldwide grosses. This is why, when it comes to measurements, I prefer “volume” measurements to “rankings”. Volume distinguishes between blockbusters, hits, flops and bombs. Rankings, frankly, don’t.

To continue the In The Heights example: even though A Quiet Place II won the weekend, it made much more money during Memorial Day weekend. ($47.5 million to $12.2 million.) With just rankings, those two performances look identical.

How does Jupiter’s Legacy compare to other series released over the last year?

Well, it’s the 13th ranked series (among season one releases) through the first two weeks. And likely Tiger King would have beat it, but I don’t have data for its second week of release. (Honestly, if we had weekly top tens for Originals, a few more series may have beat it too.)

And yeah, through two weeks it is better than the Marvel series…but Marvel series are released weekly. And crush it week-after-week. Jupiter’s Legacy isn’t trending that strong. (Bridgerton and The Queen’s Gambit are the only season one Netflix series to beat the “binge release curve”.)

Toss in executive change over and creative troubles, and that’s not enough to keep an expensive series on the air (or streams?).

– Last week I promised a “Hulu check-in”, but let’s give it one more week. Frankly, the Jupiter’s Legacy hubbub was too good to ignore. The positive news is that Hulu has a hit hanging on for multiple weeks on the list with The Handmaid’s Tale. The downside is it is trending downwards as folks catch up on past episodes, and Shrill still didn’t make the list. This will be a fascinating story to watch, to see if The Handmaid’s Tale gains viewership or loses it over the rest of May.

– A peak behind the curtain: each week, my “select first run series of the last six weeks” is curated by me to get rid of series that are 1. Old and 2. Kids series. This is mainly because otherwise every week I’d include Cocomelon. In 2021, this series has made the Nielsen top ten list every single week. If you added up viewership over the last six weeks, Cocomelon would be the number one series by total viewership, passing The Falcon and Winter Soldier’s 49.5 million hours viewed with 54.3 million hours.

– Belated note: Last week, the TV series Bones made Nielsen’s Top Ten for “Acquired” titles. It was listed as a Hulu title, but that’s not quite right: it’s actually “non-exclusive” to both Hulu and Prime Video, meaning I’ve added a new label to reflect when a series streams on multiple platforms. (I’d add this is also now the case with Cocomelon, which is on Hulu as well, but I haven’t updated it yet, since my gut is most of the viewing is still Netlfix-driven.)

– Speaking of acquired titles, the Crackle Original StartUp came to Netflix on May 4th, and was the most viewed acquired title and second most viewed title of film or TV. The last “acquired” title to act like an original like this is The Baker and the Beauty, an ABC comedy that had a second life on Netflix. That series had a two week run in the Nielsen top ten, so we’ll see if StartUp performs similarly. NBC’s recently cancelled Manifest looks like it will take the top spot in Netflix’s ranking this month too.

For the week of May 10th, the big release for Netflix was The Woman in the Window, an Amy Adams-helmed, Rear Window-esque thriller. And honestly I’m not sure what to make of it. It is sort of like Jupiter’s Legacy: not a hit, but probably not a bomb either.

When it comes to total viewership, it was only the 27th most streamed film in its first week going back to March of 2020. That’s only okay. As for Top Ten performance, it did take the top spot for several days, and then dropped off. Looking at Google Trends, I’d have expected a better week 1 performance:

This does seem to be a situation where Google Trends doesn’t capture the interest, as The Woman in the Window had more interest than Thunder Force, but their opening weekends were wildly different. There is a chance The Woman in the Window has a stronger second weekend, but the Google Trends shows a steep drop off and it will have to compete with Army of the Dead. I’d say this is a situation where the news hype didn’t match the viewership.

While we’re talking about upcoming films, its worth noting how well kids films—with their high rewatch—do on the platform overall. Here’s the last few weeks of top ten data per week, going back to early April. You can see how a film for adults comes and goes very quickly, but some kids titles hold on for weeks:

Most fascinating is how many of these kids titles that take the top spot on the Netflix list are acquired titles, like Home, The Little Rascals or Dog Gone Trouble. I’ve been writing a ton about M&A recently, and these titles show the value of some of those licensed animated catalogues.

– Each week, a few licensed Netflix film titles make the list, usually because the just arrived on the platform. For example, last week the Matt Damon-helmed, 2010 released, Green Zone had that honor, with 3.5 million hours viewed, and then it dropped off the list. (It premiered on Netflix on May 1st.) This week that honor goes to Dead Man Down, a film from 2013 starring Colin Farrell.

– One title which regularly bounces on and off Netflix is Scarface. It made the list for the week of May 3rd, having premiered on May 1st. But what’s fun about that title is that it is regularly rotated on and off Netflix, having been on the service back in 2019, then leaving, then returning, and then it will leave again in July. It’s owned by Universal Pictures, so clearly they have the right to limit its runs on Netflix.

– Correction and Fun Point: The Clovehitch Killer is actually non-exclusive to both Hulu and Netflix, but I had it listed as a Netflix title last week. I regret the error. My gut is that this title is currently getting most of its viewership from Netflix, since it was released to the service on May 4th and then made the top 30 two weeks in a row. It’s also another data point that while buzzy originals are good, apparently most Netflix users want thrillers or action flicks. Speaking of…

– Last week, I noted that no Oscar nominated films saw a bump in viewership large enough to make a Nielsen list. That sort of makes this exclusive to Variety from Netflix a bit less impactful, doesn’t it? If your viewership bumps up a ton, but you still don’t make the top ten list, did it matter?

– Five more episodes of Netflix’s Lupin dropped on June 11th. Lupin is one of the highest performing Netflix international titles, but only landed on the Nielsen list for 2 weeks. Let’s see if the part II of season one can hold for longer.

– HBO had a big end to May, with The Friends Reunion leading into the Mare of Easttown finale. Nielsen doesn’t release HBO streaming data, and HBO selects random datecdotes to sprinkle out, but it will be interesting to see if this impacts the streaming viewership in a few weeks.

– While we’re talking HBO Max, we should toss in the note that we still don’t have any firm data on any of the HBO Max day-and-date films. In the Heights seems to be the first soft release, after Tom and Jerry, Godzilla vs Kong, and Mortal Kombat all did well on their opening weekends. Already it is being positioned as, “Theaters aren’t as impactful as streaming”, but those previously popular theatrical films did well on streaming too! 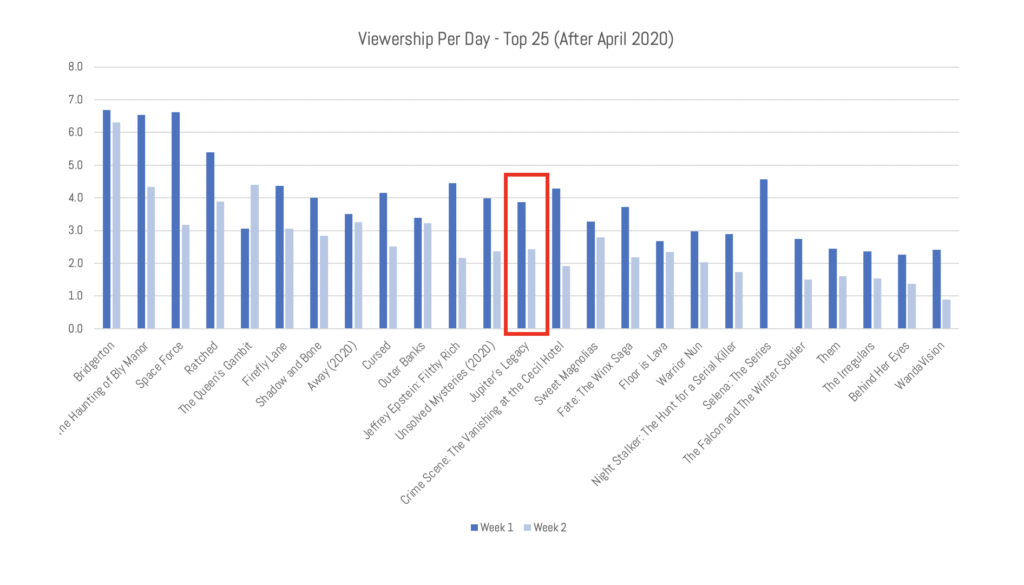