WandaVision and Coming 2 America Both Smash the Streaming Competition

If you’ve been reading my “Steaming Ratings Report” for the last few weeks, you might have noticed it has been fairly Netflix-centric. Netflix is the 600 pound gorilla in the streaming wars. Heck, it is more like a Mighty Joe Young or Rampage-sized super gorilla, marauding over the globe, buying sequel rights for half a billion at a pop.

But if the movies have taught us anything about super gorillas, it is that nature always finds a way…to give them a worthy foe. In King Kong’s case, Godzilla. In Netflix’s case, that’s HBO Max, Disney+ and, this week, Prime Video, dropping formerly intended-for-theaters now straight-to-streaming blockbusters. Like Coming 2 America and Raya and the Last Dragon, which was Disney+’s latest “Premier Access” video.

Today, we’ll look at Coming 2 America in depth, and tomorrow I’ll do a special article on Raya over at my website. In addition to Coming 2 America, I have some unique insights on WandaVision now that it has finished its run.

(Reminder: The streaming ratings report primarily covers data from Nielsen’s latest report, which covers the week of March 1st to 7th and is United States-focused. However, we also consider Netflix datecdotes, daily top ten lists, Google Trends and IMDb data in evaluating content. Also, to get this report in your inbox, sign up for my newsletter.)

Let’s start with the good news for Prime Video, which was that their film did really, really well. It broke the “20 million hours” of total viewing threshold, which only three other films have done on their opening weekend going back to March of 2020.

Here’s the first week numbers for all films on Nielsen, going back to March 2020:

What’s the biggest takeaway from this? That Disney+, HBO Max and Prime Video can compete for viewership as high as anything Netflix can deliver for a single film. Impressively, Coming 2 America joins this list as a film released on a “Friday” meaning it only had 3 days of viewership in the Nielsen ranking.

Of course, blockbusters aren’t made just by opening weekends, but staying power. What can we expect from Coming 2 America in its first full week of release?

According to the Nielsen data, the average film loses 63% viewership per day from week one to week two. Meaning, if Coming 2 America performs to the average, it will have 15.1 million hours of total viewership next week. Anything over that means its decay rate is beating expectations; anything lower means it is decaying faster than streaming films on average. You could convince me either way: on the one hand, Prime Video doesn’t release nearly as much content as Netflix, so folks may keep watching it; on the other, folks don’t watch Prime Video as regularly. In our one Prime Video data point, One Night in Miami decayed by 70% week over week.

All of which leads to the question, “Was this a good investment for Prime Video?” Industry reports put the price tag for Coming 2 America at $125 million for Amazon. In general, you’d have to say it is pretty good to get nearly as much viewership on an adult comedy like this compared to what Disney and HBO spent on their top two titles in December. (Both of which run into the hundreds of millions of dollars, versus the merely $125 million price tag of Coming 2 America, a film which cost $60 million to make.)

Or think of it like this: Prime Video spent about 33% more, reportedly, on Coming 2 America ($125 vs $80 million) than Borat, but got more than twice as much viewership.

Tentatively, yeah I’d say this deal worked out for Amazon, though I still think that Coming 2 America would have done pretty well at theaters, a counter-factual we’ll never find the answer to.

Other Quick Notes on Film

– Fare thee well to Nomadland and The United States versus Billie Holiday on the film list. I was hoping this could be the week that we feature four different colors on the same top ten, but we’ll have to wait, maybe until Nielsen adds HBO Max viewing to their tracking.

– What about Raya and the Last Dragon? Well, it was in the 17th spot on the top 30 list, which has to be a disappointment for Disney. (Mulan, for context, was 10th.) But not a huge disappointment, because getting folks to buy a movie for $30 is fundamentally more valuable than just watching it! But this is a complicated topic, so I wrote an entire article on it for tomorrow.

– Bigfoot Family is a good example for why looking at both “total hours” and “viewership per day” is instructive. (The latter is also a metric you’ll only find here!) It actually rose in total viewership week-over-week (going from 5.6 million hours to 6.1) but still decreased in per day viewership by 52%.

– Netflix had some other new films make the list, including Moxie from Amy Poehler and Biggie: I Got a Story to Tell, a documentary, at 4.3 million and 3.4 million hours, respectively.

(Spoiler warning: I intend to make some jokes about WandaVision’s plot.)

We spent a lot of time on film today, since it was pretty fun, but you know what? We have a fun story with TV to tell too. Specifically, today is the day that WandaVision gets its turn in the spotlight (or should I say “reality altering bubble”).

As you can see above, WandaVision is unique compared to most streaming shows because it actually grew viewership week-over-week. It debuted a new episode weekly and grew the audience along with it. Now that the series has ended, we can compare viewership during its entire run to the entire run of some other Netflix series. The total viewership of WandaVision actually compares favorably to other shows on Netflix. Over 8 weeks of time, as opposed to one weekend, WandaVision was the twelfth most watched show in my data set:

(This chart was made by sorting all “first run original” series on their respective streamer, through the first 8 weeks of viewing.)

But let’s not stop there. It isn’t very fair to compare WandaVision with only 9 episodes released over 8 weeks to some of these shows, like The Crown, Ozark or Cobra Kai which have 40, 30 or 30 episodes released to date. So let’s trot out our “viewership per episode” metric I’ve been using. And we get this…

Suddenly, WandaVision and The Mandalorian are now up to the fourth and fifth most popular shows according to this bespoke measurement. And these would probably hold up even if we had more data from 2020. (The Queen’s Gambit likely would have added additional viewership during its weeks seven and eight, if we had the current reporting system of three top ten lists.)

Admittedly, this metric biases for series that have recently launched, since they tend to have many fewer episodes. Still, among that class of show, WandaVision and The Mandalorian likely outperformed most Netflix Originals.

But can we go one step further? As long as we’ve taken over an entire town via mind control, we may as well bring back our dead robot-husband, right?

Let’s magic into existence one more metric. Unlike the other shows on this list, WnadaVision episodes were short. The first episode was only 30 minutes. Half an hour! And a lot of the run time is just dubbing credits. (Literally, like five minutes worth.)

So could we account for that? A “viewership per available hour” metric, meaning it accounts for the total viewership for the total amount of content folks could watch? Why yes we could!

There you have it. An analysis of the Nielsen data you won’t find anywhere else. And yes, in this metric, WandaVision leaps to the top spot. The meaning? I believe that more unique viewers likely tuned into this show than any other Netflix Original released this year, except for maybe Bridgerton. Or The Mandalorian and maybe The Queen’s Gambit in Q4 of 2020.

By the way, this shouldn’t be too surprising! The two most popular franchises in America—after Knives Out of course—are Marvel and Star Wars. And when you look at Google Trends, yep, these are our two highest ranked shows for longest. First, without The Mandalorian, and then with it:

So I just dropped three different, totally valid, metrics to judge TV show performances. (Technically four with Google Trends.) Which metric is “best” to judge a show? Well, that depends! Entertainment isn’t like sports, which have clear winners and losers. Instead, it depends on what your business metrics are how the various shows support those metrics.

For Disney, these numbers are fantastic. It means using their weekly release model, they really can drive as much subscriber tune in as the top Netflix series. Of course, Netflix in some cases is launching four or five series at this level every quarter. Really it is a question of tradeoffs: is it better for one series each quarter to keep people subscribed, or multiple series every month that drive higher usage? That’s a business strategy question we’ll see play out this year.

Other Quick Notes on TV

-As I speculated last week, Ginny & Georgia went on to grab the top spot in the streaming ratings. If the weekly top ten list is to be believed, it could hold onto that spot for a few weeks.

– The latest crime documentary is Murder Among the Mormons, which launched to 9.8 million hours viewed. Which is good, but behind some other recent launches.

– Since Nielsen separates out “originals” into their own top ten list, we’ve seen some older Netflix originals finally show up in the top ten viewing. The latest is Orange is the New Black, with 4 million hours of viewing.

The most popular piece of non-streaming content during the week of March 1st was fairly clearly the Meghan Markle-Oprah interview that aired on Sunday March 7th. Unfortunately, Paramount+ isn’t tracked by Nielsen, so we don’t have streaming ratings. But 17.1 million people tuned in live for this one show, which shows you how much room some the streamers still have to grow.

– The big story of the week, to continue the gorilla theme, is that HBO Max is out touting that Godzilla vs Kong did very well for them. Which is notably more than they said about Snyder Cut. (Others said that the new Justice League did well, but not HBO PR.) Fingers crossed we’ll get more data on this in a few weeks, though so far Nielsen hasn’t released any HBO data since Wonder Woman 1984. 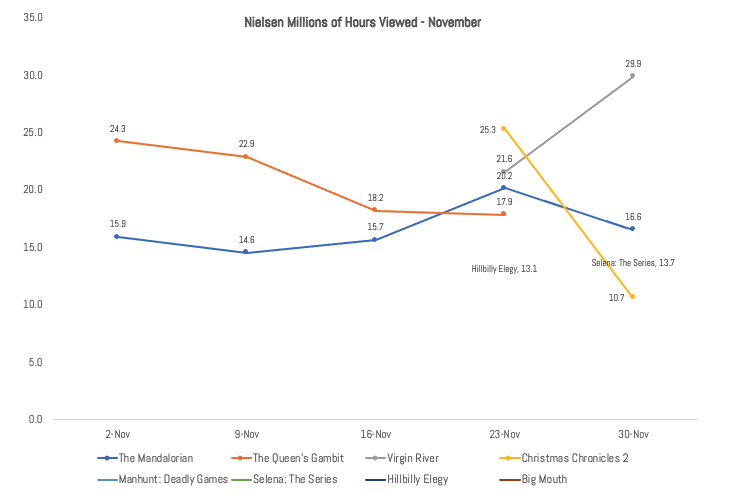 PrevPreviousNetflix Claims the Top Spots While Disney+ and Hulu Dominate the Film List
NextDid Raya And the Last Dragon Sell 1.18 Million Copies in the US on Its Opening Weekend?Next