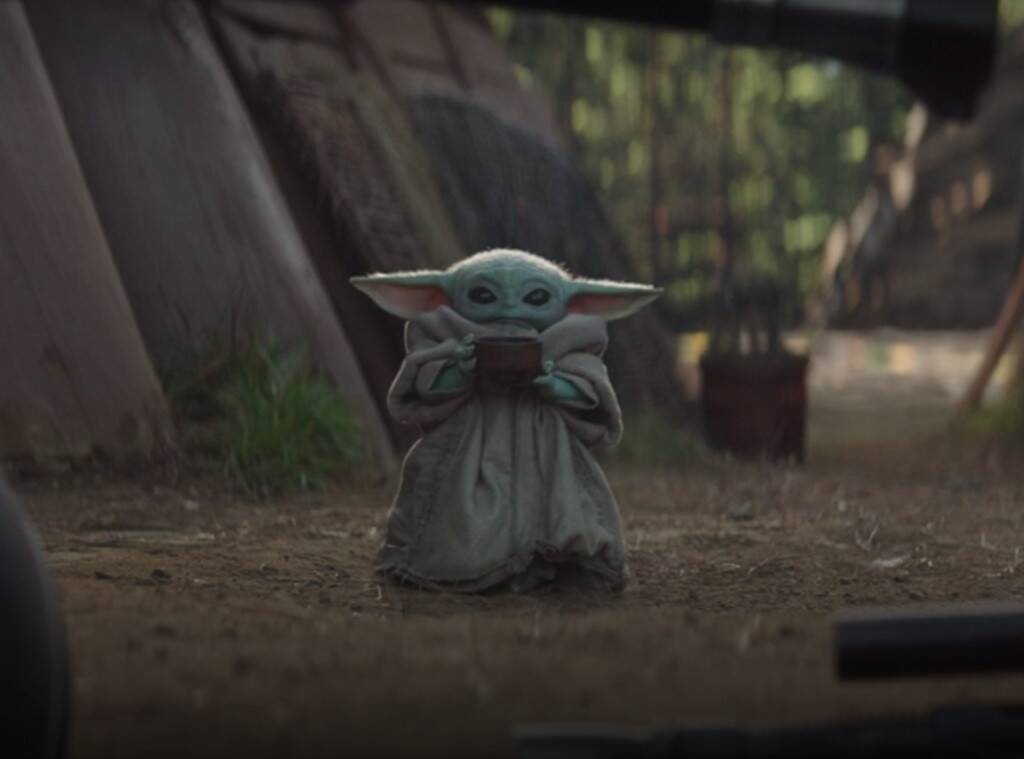 Star Wars did so well in TV this year, that virtually everyone knew which character was the “symbol” for 2020: Baby Yoda! 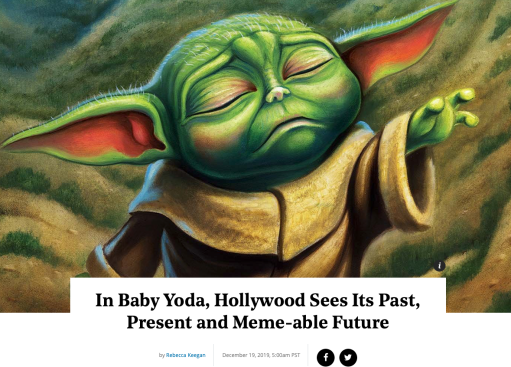 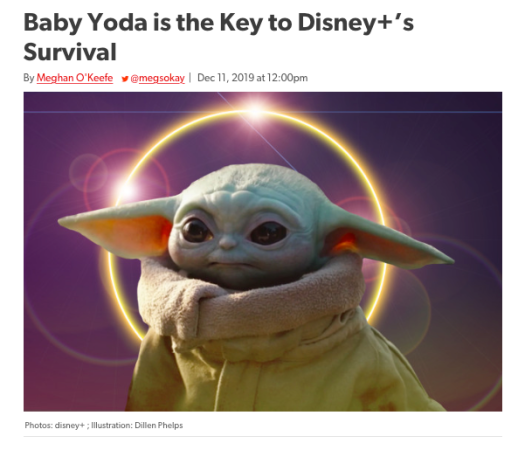 We know Baby Yoda conquered the social landscape, but how does that translate to Lucasfilm/Disney’s bottom line? Well that’s my topic for today. If you missed it, read Part I for my methodology and the performance of Star Wars films. As I was writing “everything else” I decided that each business unit deserved its own article. It’ll make each article smaller and easier to read, while providing regular content for the site.

We got a lot to cover, so like the Jawas escaping Sand People, we’ll move fairly quickly.

Whether it’s only because of one adorable (non-CGI) character, or the authenticity of this latest series, or just drafting off of the popularity of Boba Fett among Star Wars fans, Disney’s new streaming service launched with one of the top new TV series of the year in The Mandalorian. As always, here’s the Google Trends data: 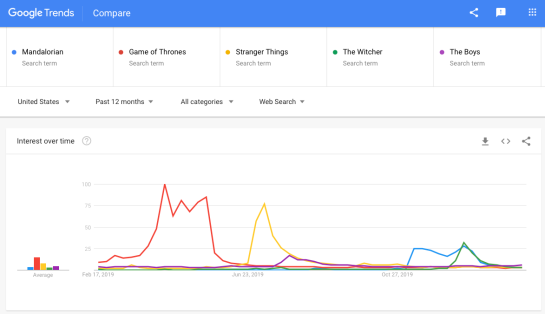 Other research firms back up this popularity. Parrot Analytics awarded The Mandalorian its “most in-demand new series”. The service TV Time saw The Mandalorian surge in interest as well. So it’s popular. It’s a hit.

This is a big change to my model. I’d assumed a Star Wars TV series would do well. Sort of like the Marvel TV series for Netflix well: lots of doubles and triples, but no home runs. Instead The Mandalorian is a home run with a chance for a grand slam, if its second season sustains what season one pulled off. (Which is no small feat. Lots of great season ones fade quickly. The Black List. Gotham. Mr. Robot. The Man in the High Castle. The Handmaid’s Tale. Every Netflix Show that didn’t make it to season 4.)

So I have a few changes to my model then. (Here’s my article on TV from last time.) First, I increased the value of what I called “the Jon Favreau series”. I calculated the value of the series as a percent of the production budget because, for Lucasfilm, they are acting as a producer here. And this is what I think the series would be worth, roughly, on the open market. (As for their value to Disney+, I’ll discuss that in my last article in this series.) However, hits are still worth more, so in the event of a blockbuster TV hit, I tripled the imputed fee from 30% to 90%. (Meaning it went from 130% of the production budget to 190%.) Also, I lowered the number of episodes to 8, but kept it at a little more than $15 million per episode. (Which is the consensus cost.)

As a result, here’s how the value of The Mandalorian changed from being a “hit” versus being just “another TV show”.

Are these numbers reasonable? Probably, with just a pinch towards the high end. As you can see, if you take my “high case” as a “revenue per sub”, I basically think it’s worth $11.40 per subscriber. Which on it’s own is huge, but more a function of how few subscribers Disney+ has right now.

The next change was moving the Obi-Wan series back a year. And this brings up the biggest risk for Disney, which is getting these TV series out on time. Frankly, The Mandalorian has done a great job at releasing a season 1 and having season 2 ready to go later this year, only 12 months a part. However, the Obi-Wan series recently switched showrunners and won’t be out until 2021 at the earliest. As a result, I moved back a few of the series.

The last change I tried to make was to move my “imputed license fee” model to an “attributed subscribers” model. But I utterly failed. Why?

Well, I just don’t know enough about Disney’s finances. I took a guess at “customer lifetime value” of Disney+ subscribers, but the pieces we don’t know are too huge to make it reliable. For instance, we have no data on the average number of months we expect a customer to subscribe because it hasn’t happened yet! I also have a guess on marketing expenses per subscriber, but it’s all a guess. (We know revenues were $4 billion in the last quarter, so assuming 20% marketing expense on that, and you have about $800 million. But even that could be low.) About the only thing we know is that the average revenue per subscriber is $5.50.

Moreover, trying to attribute subscribers is nearly impossible. Because we don’t know how many folks actually watched the Mandalorian, let alone subscribe to it. Also, given that Disney+ is growing so much, it too tough to attribute subs to Mandalorian versus all the other content. Unlike HBO or Netflix, this is far from a mature service to judge.

The final change I did make was to eliminate my “low case” model. Frankly, I think Disney would really have hurt the Star Wars brand to release anything less than five TV series over the next decade or so as they launch Disney+.

As a result, here’s my current base case model: 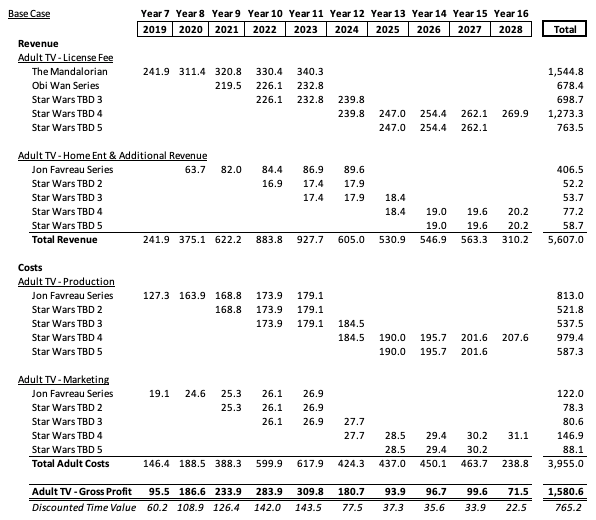 You can see how I value kids content as well, which is I only count it as a production cost. If the upside for kids TV series is selling merchandise—which is a simplification, but not entirely wrong—than I’ll calculate the upside in the “toys and merchandise” article.

And the “high side” case:

Money from 2019 (most accurately, operating profit)

Thus, in my model, The Mandalorian, in success, is about a $95.5 million dollar profit engine this year. Which pales in comparison to Rise of Skywalker, but that’s because films just have much higher upside in success, due to multiple revenue streams. Next year will be a bit higher, though, because I think Disney will monetize The Mandalorian in more non-toy ways, potentially even via home video.

(What about potential Baby Yoda toy sales? That will be covered in the “licensing” section. And yeah, Disney didn’t have any available anyways!)

Long term impacts on the financial model and the 2012 deal

As for the future, I’m not ready to change my basic model going forward. Repeating huge TV hits is a tough business, and with the wrong showrunner, the Obi Wan TV series could be as middling as anything. Indeed, that series is cycling through showrunners. As a result, through 2021 we’ll still only have one Star Wars TV series.

However, the upside case is now higher for TV. If the Lucasfilm folks can generate just a few more hits, than they’ll be able to drive subscribers to Disney+ and a lot of potential value. The key is getting more huge hits. Even though costs would stay about the same in both my base case and high case, the revenue could jump from $5.6 billion to say the $8 billion over 8 years.

In this case, we can tell that The Mandalorian helped revive any lingering doubts Star Wars fans had about the direction of the franchise. The buzz around Baby Yoda led to countless articles singing his praises. As a result, if you take my critical acclaim chart, you get this:

Look at that! The Mandalorian is the most critically acclaimed of any Star Wars property. (With the caveat that since it isn’t global, the overall number of ratings is fairly low compared to the films.) If you want to know how to make Star Wars, this is it.

I didn’t have recommendations on the film side, but TV really did have one for me. And that recommendation is one person’s name: David Filoni.

He’s been the showrunner on every Star Wars animated projected and he executive produced The Mandalorian. I’m ready to give him a heaping doses of credit for The Mandalorian given that his animated series are fairly well regarded by the fandom too. In other words, if Disney is looking for their Greg Berlanti, this is it for Star Wars.

From an operational perspective, I do think they should ramp up to one Star Wars series per quarter. This seems crazy, but the universe is clearly big enough to support that many stories. Especially if one is a kids series and then you have three adult series and/or limited series filling out the gap.

(And I’ll repeat it until I die to wish it into existence, but if you want a killer limited series, turn the book series Tales from Mos Eisley Cantina into a series. You can thank me later.)