Early last week, I had an easy leading candidate for the “Most Important Story of the Week”. Then, on Thursday. AT&T had their “I am Spartacus” moment. Should I change just because that story took over Twitter and would get me more traffic? Nope, but it’ll be a contender.

When I read the headline, I guessed that a lot of this was about valuing libraries and shenanigans therein. Valuing libraries is hard. In my opinion, that’s where most “Hollywood Accounting” comes from. It is onerous to negotiate distribution deals for every single TV series and movie. As a result, many studios just negotiate an “overall” deal for future series and sell all their content to a streamer or channel, with maybe some carve outs.

Usually, that buyer has their own vision of what every piece in the overall deal is or will be worth. The seller probably has a similar view, but legally they try to pretend everything is valued equally. They want to pretend that less valuable (and usually less profitable films) are more valuable. This keeps profit from going to already profitable films or series, so the studio gets to keep more. This is “Hollywood Accounting” in a nutshell.

(Bonus: My article on film financing shows a quick example of this. Also, the economic distribution of hit TV shows is, you guessed it, logarithmic. So winners really should take home most of the revenue, which is why “Hollywood Accounting” is so flawed.)

What this is about: Double dealing between business units.

In the Bones case, though, the double dealing wasn’t tied to distribution deals. The negotiations with Fox broadcasting were done on a one-off basis (as most current series are with their distributors). Same with the negotiations with Hulu. And likely the international buyers. Since the conglomerate 21st Century Fox owns all those pieces, from the studio making the show to the distributors, they just sold the shows to themselves.

The temptation to resist double-dealing was too great. When the network threatened to cancel if fees went up, it isn’t surprising the studio caved. It is hard to go to war with a fellow business unit (one you may end up running!). Since studios will own even more of the value chain in the future–in AT&T and Comcast’s cases this includes the pipes streaming the content; in Apple, Amazon and Google’s case this includes the devices playing the apps–double-dealing will be even more of a risk. Seeing it so blatantly in this arbitration should worry talent.

That’s obvious. But it has ramifications for a decision like this. Legal decisions decided in a courtroom, create precedent that applies to future decisions and contracts. That doesn’t happen in arbitration (or settlements with non-disclosure clauses). Because mandatory arbitration tends to favor the powerful, which is obviously the studios, this hurts talent. Just because Fox lost this one–and The Hollywood Reporter got a hold of it–doesn’t mean that it is as big a victory for talent and profit participants as if it were in open court. There is a reason this was “secret” until Eriq Gardner broke the story.

(So yes, mandatory arbitration is usually bad, in my Constitutionally-derived political position.)

The economic context: Will the huge punitive damages will discourage bad behavior?

Maybe. The Friday edition of The Business podcast noted that every agent or manager will now double-check the profit participation numbers from Hulu. That is true, and for future deals, lawyers will need even better language to deter double dealing. But honestly, would this huge award stop studios from trying to hide profit?

Probably not. Consider the total award is $180 million. Let’s say Fox tried to take $50 million or so from their ten biggest shows. (Fictional numbers to illustrate a point.) That’s $500 million, and they only got caught once. That means they’re still taking home $320 million. (Assuming no other talent payouts.) In other words, this is why every decade has a huge talent participation lawsuit: it just makes sense for the studios to keep trying it.

The future: This benefits Netflix?

Maybe. The argument here is that Hulu will have to pay well above market rates (or at least at Netflix’s deficit financed rates) in the future. Or when AT&T, Comcast, and Disney launch their platforms they’ll have to pay higher rates to keep talent from complaining about double-dealing. This would be to the dominant market player’s advantage (Netflix), since they can leverage international subscribers to outbid the others.

On the other hand, Netflix is winning the “profit participation” battle by just not waging it. If you don’t sell a show overseas, you can’t screw talent by selling it below rates. If you don’t sell merchandise, you can’t bury those costs in line items. If you don’t do electronic sell through, second windows, international or home entertainment, you don’t have to pay anything out. The windfall that would previously come to wildly successful TV shows–Simpsons, Friends, Seinfeld, etc making billions–will never come to any top Netflix talent.

(The way traditional studios could fight Netflix at their own game is to publicly bid on the rights to Stranger Things for say Syfy. Let those creators know the cash Netflix is not giving them in profit participation.)

Of course, the streaming landscape is always evolving and streaming giants are thinking about other ways to reward hit TV shows. They have their own versions of profit participations. Renewals will always feature renegotiations. That said, Netflix’s current plans are to just pay everyone ahead of time, which front loads all the risk. Of course, paying everyone like they are a huge hit has financial risks if most of those shows end up becoming duds, as usually happens with all TV shows. (And Netflix has a very ordinary track record here.) So we’ll see.

Is any studio better than any other?

If you just use the history, I mean not really. But yeah, let’s make a spreadsheet on this for future articles!

One solution: More distributors and competitors.

My pro-competition, anti-big business solution is simple: Bring back the value chain!

What I mean by that is each layer of the value chain–content creators, distributors, distributors of distributors, and the people who own the pipes–should go back to being not vertically integrated. (And not horizontally either.) The best way to eliminate double dealing is to not have business units in the same firm depressing prices artificially. If distributors like Netflix or ABC or NBC-Universal or Amazon didn’t own their own content, we’d likely have a many more independent production companies, which would improve overall quality of content.

More markets is the solution here. (Which feels like it should be the traditionally “conservative” solution, but is somehow the liberal/progressive position.)

Other Contenders for Most Important Story – AT&T Replaces Two Executives

That feels wrong, though, based on the coverage. The stories on the departure emphasized Richard Plepler and David Levy’s accomplishments. Trading Plepler/Levy for Bob Greenblatt of formerly NBC fame is just that, a trade. Like two teams trading NBA players. We could genuinely debate the merits of the executives on both side, like debating the merits of to basketball players.

The NBA analogy is what sticks in my head when I think of evaluating business executives in Hollywood, a subject I want to do a LOT more of. Like the NBA, though, evaluating talent is really, really hard.

Don’t let anyone tell you otherwise. Picking a set of metrics and sticking to them across all development and business execs is really tough. Moreover, unlike sports, businesses don’t break out individual executives performance the way the NBA tracks assists or rebounds. On the creative side, with Plepler, I saw a lot of coverage about the hits he oversaw throughout his time at HBO. Though, obviously he doesn’t share sole credit for The Sopranos or Game of Thrones. (As most articles euphemized, “He had a hand in”. How much credit is a “hand”?) He had a predecessor who was also lauded, named Michael Lombardo. Contrariwise, on the business side, HBO made billions under his watch every year and added 40 million subscribers worldwide. .

To keep piling on NBA analogies, like an NBA firing a coach and immediately hiring a replacement, clearly AT&T has their replacement lined up in Bob Greenblatt. Business execs are like NBA coaches, in this sense. Most are good. If they are terrible, they get fired and never work again. But most keep their jobs for 5 or so years, get fired and get hired somewhere else. But about 10% are “elite”. They keep their teams high performing for decades. (I’d count maybe three current coaches as elite.) Greenblatt is credited with turning around NBC, so he could be elite. I just couldn’t definitely state it either way.

A lot of words were spilled on the pages about HBO/TNT. Here are the three best stories I read. (Though, clearly the Bones/Fox arbitration story is the must read article of the week.)

He laid out most of the “facts” in the clearest summary. Though it still left me wanting an accounting audit on which executives actually greenlit which shows during Plepler’s tenure. But the old adage that a successful TV series and a hundred fathers, and a failure has none.

I also liked his Alan Horn analogy, though I think Horn may be the “Bob Myers” of studio executives to continue my NBA general manager analogy. In other words, starting with Steph Curry and Klay Thompson is like joining Disney Studios with Marvel and Pixar. That’s a hell of a starting line up already, though he made some good movies.

Kafka used insiders to make the “pro-Plepler” case that Plepler was the face of HBO. Moreover, it provides the “AT&T doesn’t have a strategy” case from those insiders, which is really the reason why Plepler/Levy departing is interesting.

Michael Schneider makes the early case for what the Greenblatt hire means. He sees Greenblatt as an “air traffic controller” trying to deconflict and decide what content goes where. There is also speculation that TNT will end up focusing more on live events, like the NBA. Crucially, though, Levy used to own that relationship, so will they keep it?

Context – Chair of House Subcommittee on the future of antitrust

The House of Representatives subcommittee on Antitrust may take a new look at old technology mergers. That screams to me Amazon and Facebook. Both have been aggressive on M&A, especially Facebook who swallowed up two competing social media platforms. I’d love for the digital streamers of Twitch and Youtube to become their own businesses again as well. (Same with AWS.) Those moves would likely help lower costs across the board, especially in digital ads. Given that the House of Representatives could actually investigate this issue and someday pass laws on it, this is a good read.

Listen of the Week – The Indicator: TV vs Video Games

The Indicator has a supremely “entertainment” episode from Tuesday of last week. In a letter to shareholders, Netflix introduced the idea that their competition isn’t other TV, but video games like Fortnite. Well, The Indicator digs into the data (well, feature an economist who dug into the data) on who is winning the battle, TV or video games. 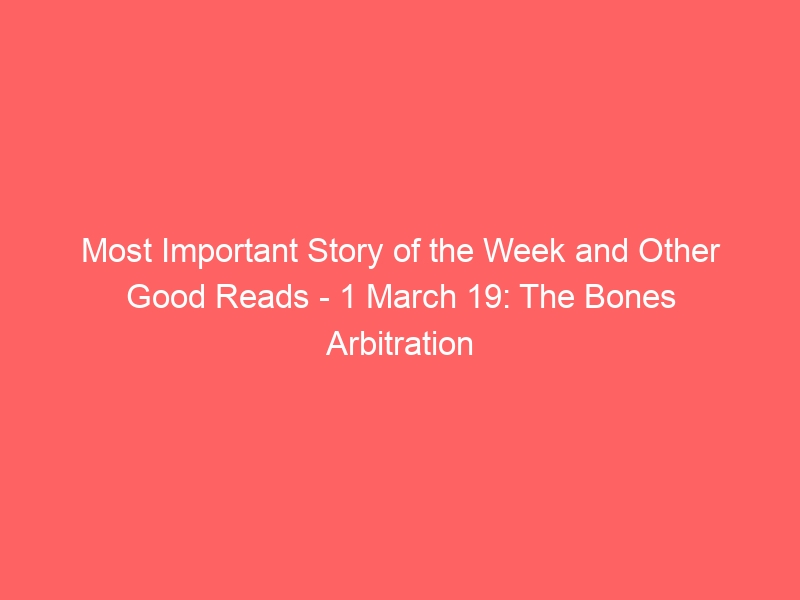 PrevPreviousThe Most Diverse Oscars Yet?
NextYoutube (And all Social Platforms) Deal with Child PredatorsNext