If I have one goal with this website, it’s to combat bad narratives about the entertainment business. And the best way to do that is with data. You’ve heard me mention this before, “Strategy is Numbers”. Data is the first step to quashing anecdotes and narratives.

Today I’m going to lightly touch on one of the most important issues in Hollywood: diversity and representation. Frankly, Hollywood does a bad job discussing the issue mainly because it doesn’t use data. Without data, we can’t make good decisions to solve the problems. Instead, we rely on narratives built on anecdotes. (Though some places like USC’s Annenberg School do study the issue and try to bring data to the fight.)

Since all eyes are turned towards the Oscars, let’s ask some questions about representation.

Most Important Story of the Week – The Oscars: The Most Diverse Year Yet?

I took a stab at answering this last August, so now it’s time to update that article with the 2018 data. I’m going to look at three types of representation in the Oscar films: African-American, global and Latinx-American. (LGBTQ has been covered by other publications.) My sample size today is just the Best Picture category, since I haven’t collected the data for actors, writing and so on, and this is a quick update, not a full-blown research project.

First, African-American representation. For all these categories, I count films that have either an actor, director or themes that represent African-Americans. One table notably sums up how well the Oscars have been doing:

The key takeaway–which I really want to emphasize–is that expanding the field to 10 films has been great for featuring more diverse voices. (Along with other changes too.) In 2018, this clearly went even bigger with three films featuring African-American themes and one of them was about superheroes, a genre never represented in best picture before. So chalk up one victory point for expanding the number of films in the Best Picture category.

However, the expansion of the categories hasn’t been great for what I call “global diversity”. In other words, foreign language films. Movies made outside of America. 2018 is the first year to feature a non-English language nominated film since Amour in 2012. Here’s a table showing that breakdown:

This is a small sample size issue, though. Between 1998-2006, four foreign language films were nominated for Best Picture. Since the expansion, only two have been nominated. So the number of films nominated went down, even as the total films almost doubled. (5 films per year to 8 to 10 per year.) So clearly just expanding the number of nominated films doesn’t make the Best Picture category better for global films.

Moreover, this year’s Roma nomination brings up another tricky issue: Latinx representation. If you consider all Spanish language speaking people, well, the Oscars have been on a run. The 2010s have been dominated by Mexican directors–Alfonso Cuaron, Alejandro González Iñárritu and Guillermo del Toro–who have had multiple films nominated for Best Picture.

The problem is if you clarify “Latinx-American”. Those three directors above were all born in Mexico. As far as I can tell–mainly using this Wikipedia article–the only Latinx-American to receive a Best Actor nomination this century is Demián Bichir, and his film wasn’t nominated for Best Picture. Benicio del Toro was nominated for Best Supporting Actor twice in 2000 and 2003, but hasn’t been nominated since.

So using the same definition as African-American films above, I don’t think a single Latinx-American film has been nominated for Best Picture this century. So that’s another strike against diversity in Best Picture films.

As mentioned above, too, Asian-Americans have had a similar lack of representation. (And this year had a very easy, good opportunity to do right with Crazy Rich Asians.)

So we need more solutions to fix the diversity issues still involved with the Best Picture category. Honestly, I’m a bit terrified diving into this territory today. If you write something wrong on race, it can backfire and go viral in terrible ways.

But we need better representation in our films, so I went ahead. Most of the articles I read only use anecdotes to cover the issue. Even the more rigorous data-based approaches usually have clear methodological biases. (Though I avoid pointing these out lest I give ammunition to people who are racist, alt-right trolls.) Moreover, the primary solution for Hollywood–diversity initiatives and diversity showcases–don’t work. So consider today my start at looking for data-driven solutions to help executives and Hollywood as a whole make better decision, especially to be more diverse.

Other Candidates For Most important

So Many Skinny Bundles

Charter is creating a “Spectrum TV” bundle for internet only customers. Viacom signed a deal to get their channels on PlutoTV, together. Throw in Alan Wolk in last week’s TV Rev update about how the growth in the vMVPD space and the conclusion is, “So many skinny bundles!”

The “vMVPD” angle of the streaming wars is an interesting front. Call this the “vMVPD air war” to the “content ground wars” and “naval streaming wars”. Yes, I’m taking the “#StreamingWars2019” moniker to its logical conclusion. Sure, it’s fun to read about who can have a more compelling streaming service between Disney and Netflix, but people still need local news and live sports. And cheap, free content to kick back and just watch. So OTT fills multiple needs.

But how many can the market support? Well, probably not this many. Definitely not this many. The cable component is really the intriguing part here. Owning the device is a clear competitive advantage in owning an OTT. Roku has a lot of devices; same with the AAAs (Amazon, Apple and Alphabet/Google). But cable boxes own even more homes. And some of the companies are innovative (Cox and Comcast) while others are terrible (despite their OTT, Spectrum). So can they take their ability to bundle internet (happening anyways) and move into the OTT space? It remains to be seen.

The Biggest Movie in China: The Wandering Earth

There isn’t much most executives can do about this, but the fact that The Wandering Earth is the second biggest and soon to be biggest film in Chinese cinematic history is important. It is another reminder of the size of China, as well as a reminder that not all local hits travel.

Is it important that Netflix bought the global streaming rights? Only in that it shows that Netflix is dedicated to buying lots of international products. (And to overpay for them.) That said, of all their purchases, I tend to agree with going with big hits, so I like this for Netflix. The story I do want to look up is if any US studios thought about distributing it, and if so, why it didn’t break out here.

This story was broken by Bloomberg via Anousha Sakoui on Thursday. Instead of having one block of voting shares, the Murdoch’s are dividing up the incoming Disney shares (and cash). Given that I am eagerly watching Disney’s plans in the streaming wars, having a unified Murdoch group second guessing that strategy could have been very distracting. Now, that worry is less of a worry. (Though never completely gone.)

When Apollo Global Management purchased Cox’s broadcast TV stations for $3 billion, it got a lot of news, but somehow less news than Spotify buying two podcasting companies for 1/10th the combined price. This is a few weeks old, but I’ve been sitting on it because as I kept thinking about it, man, $3 billion is a lot of money. And it shows that if your goal is to generate cash flow, even as it goes out of business, broadcast can generate a bunch. There are now rumors that Apollo will look to rival Sinclair by buying stations that Nexstar has to spin off. This will end up with an entire broadcast channel portfolio, and roughly three huge players in Sinclair, Apollo and Nexstar. So stay tuned.

Want to know what I spent too much time on this week? Old Oscar nominations. Inspired by Bill Simmons, “Five Year Oscars” I asked myself the question, well what should the 2014 nominations have looked like, if my proposed “Popular Film Committee” had been working back then.

I called this a quick Oscar dive when I titled my Excel worksheets, but it took forever. Anyways, 12 Years a Slave, Gravity, American Hustle, Captain Phillips and Nebraska had the top five slots in the Gold Derby nominations (combined score of experts, editors and users). The next two slots go to The Wolf of Wall Street and Lee Daniel’s The Butler, which both did $116 million in box office while getting Gold Derby love (which presumably translates to Oscar votes). This means that Her, Dallas Buyers Club and Philomena would not get nominated back in 2014.

Onto the big/genre films. There is one no brainer in Frozen. Yes, it went on to win best Animated Feature, but it should have been nominated on the bigger stage to. It got some Gold Derby love and has a very good 74 on Metacritic. (Wolf of Wall Street had a 75, for reference, and Philomena had a 76.) Arguably, more people have watched Frozen than any other movie on this list. So it makes it in.

My fictional committee had trouble over the next two slots. As Bill Simmons noted, 2013 wasn’t a great year for movies and that extends to popular films. (2012, 2014, and 2015 had a plethora of popular films that did were also critically acclaimed.) Some notable films–as in I remembered them or they stood out–had poor critical reviews, so I discarded them, including The Hangover III and The Great Gatsby. Also, with hindsight I discarded Fast & Furious 6, since both Fast Five and Furious 7 were superior films.

The next movie to go is Iron Man 3, the second biggest movie of 2013. Ultimately, Iron Man 3 didn’t live up to the hype of the first film, with only a 62 on Metacritic. Plus, Avengers would have snagged a spot the year before , so there could be some Avengers fatigue. Desolation of Smaug was the best performing The Hobbit film, but it still only got a 66 on Metacritic. (Though it surprisingly had some Gold Derby love.) I heavily considered Lone Survivor, but it had a pretty mediocre 60 on Metacritic and some divisive political themes, so it doesn’t make it in the “war” genre spot.

That leaves two more spots. For one, I’m going to put The Hunger Games: Catching Fire. It was actually the best reviewed of the Hunger Games films and the biggest movie in 2013. Next, I’ll take Bill Simmons recommendation and put in The Conjuring. It didn’t get any Gold Derby votes, but it did get a 68 on Metacritic and ended up redefining genre. It’s the type of film this committee is looking for. So it makes it in with its $137 million in domestic box office.

So here’s the old Best Picture nominees, and my revised table. I ask you, in addition to better box office performance–and presumably Oscar TV ratings–which set of films really represents the year 2013 better? 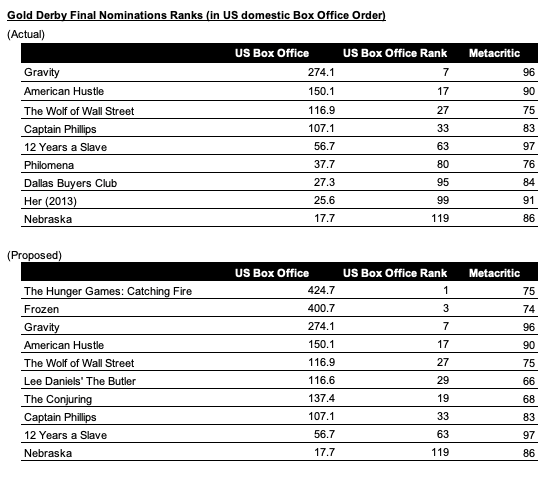 And here’s a comparison, with the bonus Metacritic ratings to show if the films really hurt the overall critical ratings:

They did hurt the critical ratings, but not by much. And not as much as the films are much more popular.

I haven’t recommended an Ankler newsletter in a while and this feels like a good week. With Netflix and Disney squaring off over a statue, Richard Rushfield penned a “who you got?” column asking who’s cards you’d rather have at the streaming video poker table, Netflix with 140 million users or Disney with the IP? It’s a great read. (And since I think content is king…)