This week was CES in Las Vegas. It seems like everyone had a great time on Twitter. Sarcastic question: do we need a few MORE conference in entertainment?

The biggest “news” seems to be that TV screens are rollable now! Meanwhile, the implications for the steaming wars were less obvious. But we got two tidbits which is all we need to start leaping to conclusions.

Before we talk about Apple, let’s talk about Microsoft. The poor man’s Apple, who sometimes has a larger market capitalization. Back in 2012, Microsoft had a genius idea: we’ll launch XBox Entertainment Studios, and make exclusive content for the XBox, which will drive device sales. It lasted about two years before Microsoft shuttered it when they realized it wouldn’t work.

Apple, it seemed to me, was headed down that exact path.

Device sales aren’t like signing up for streaming. Heck, even switching cable companies may be easier or more affordable than switching devices in this day and age. If Apple was going to use content–and lord knows they spent all of 2018 buying a lot–then I was prepared to hammer that strategy. Frankly, their content just wouldn’t reach enough people to justify the wild costs.

It’s hard to price discriminate when it comes to content. Take the theater: most people pay the same price for the same movie ticket. Like all things, this isn’t an iron law (for instance, there are senior and student discounts; same for matinees), that said at the movie theater you can’t check to see if someone is a millionaire to charge them more. The fundamental conclusion from this is if you can’t price discriminate you need to reach as many people as possible.

A device-centric strategy is the opposite of this.

If you have a fundamentally smaller audience–say only the people who use Apple devices–it means you are automatically shrinking the number of potential viewers. This means the content will have to be extraordinarily well-received by the remaining customers to justify the costs. Since it is hard to switch devices and hard to make extraordinarily good content, this is a huge structural problem. But Apple signaled this week they are willing to partner with other companies to increase the potential audience for their originals.

Apple may still not succeed. Honestly, we just don’t know enough about their ultimate strategy to judge yet and their cash reserves are enormous. (We’ll save the discussion on how “cash reserves burned in unprofitable ways are bad for shareholders” for a future article on “net present value”.) But at least this small announcement tells me they recognized the trap of trying to use original content to push devices, and won’t make the same mistake as Microsoft.

– Alan Wolk in TVRev says the companies to keep any eye on are whether Apple gets distribution on Amazon and Roku. I agree. To really maximize distribution, Apple will need to be on those platforms as well. Remains to be seen.

– The Verge called this decision “inevitable” that I don’t quite agree with, but don’t hate either. It’s also a good summary of how CES goes.

Hulu owned the top spot for most of the week. And I had a tremendous chart I planned to drop, but it got moved to its own article, maybe for next week. (It’s a good one.) Anyways, you probably saw the headline figure on this that Hulu is up to 25 million paying subscribers, after adding 8 million in 2018.

The fun part is to figure out “why” this happened. For that, let’s pull out another business school framework, the 3Cs-STP-4Ps. Or just the last “4Ps”: product, packaging, placement, price. This is a framework built for consumer packaged goods. (Crest toothpaste is the HBR gold standard case study.) I’ve tried to apply it to streaming in past jobs, and it’s not a 1 for 1, but it still gets the job done.

The last year Hulu had some hits in The Handmaid’s Tale for example. This is the story that Hulu wants to tell. That and the continued strength in licensed shows probably helps explain this jump. The problem is it doesn’t explain why the jump happened so high this year, in particular. And we don’t know how many people actually watched The Handmaid’s Tale.

They’ve always had good UX, in my opinion, though it depends on device. This doesn’t really explain the leap though. DId they have some innovation I missed that attracted a lot of new subscribers? Probably not that good.

Did Hulu sign any huge deals putting them on a bunch more platforms that I wasn’t aware of? I don’t think so. Unlike the Apple-Amazon battles, they’re sort of seen as a neutral third party and seem to be on every major device.

Ah, here we go and all credit to the TV Answer Man for pointing this out to me. In the early part of 2018, Hulu slashed prices, often half the price of Netflix. Sometimes as low as a dollar per month. Did Hulu exchange cash flow losses for subscribers? That’s what Comcast buried in an SEC filing midway through the year, so yeah Hulu is burning through hundreds of millions of dollars every quarter. So yeah, they are.

My constant caution is to ALWAYS avoid “single cause” narratives. No single explanation ever truly explains why something happens in a field as complicated as business. So in the same way that THe Handsmaids Tale didn’t sign up 8 million new subscribers, the price decrease didn’t either. Multiple factors worked together.

Other Contenders For Most Important Story of the Week – Quick Notes

– John Lasseter moved to Paramount-associated Skydance. (Let’s wait until this shakes out before we comment/anoint it important, but it could be. Though I am naturally skeptical that development execs moves are game changers.)

– NBC-Universal may cut primetime ads even further. (Bravo on being innovative. Just because it isn’t tech doesn’t mean it isn’t innovation.)

– Bungie Splits from Activision and keeps Destiny (I always check in on the video game world, and this was the biggest news, even if I can’t really explain how it will change the future. Also, I’m a Halo fan, even though they aren’t involved any more.)

Long Read – Checking in on broadcast TV Ratings (they’re down)

So this shouldn’t come as a surprise, but TV ratings for the broadcast and cable channels fell again in the last quarter of 2018. Still, I always recommend a longer-view check in on topics like this.

It’s an especially interesting comparison to theaters, who are also losing “viewership” in the form of ticket sales. It just seems like viewership is down by much more than the decline in theater attendance. My caution, though, is how much of this has been transferred to vMVPDs. If you watch NBC on Roku or Hulu, is Nielsen still counting that? If so, that’s bad for networks. If not, then the cord cutters may still be consuming content. That’s why this chart from Deadline about how the most “binged” comedies are all still broadcast shows should say something.

Context Update – Debt Across the Board

Here’s the thing: I’m not a fan of debt as a strategy. This isn’t a “never use debt” maxim. That’s too extreme. But debt can quickly get out of control for a company. (Arguably, debt was more responsible for Toys’R’Us’ death than business conditions.)

That’s why I tend to be bullish for many tech companies that haven’t proven profitable because of their reliance on debt. Most prominently Netflix–since I write an entertainment website–but also Uber, WeWork and, now, the scooter companies. I love railing against unprofitable companies relying on debt.

So when I read this good article in Variety on the economic conditions we’re facing, the thing that jumped out wasn’t Netflix’s debt load–I knew that–but the debt load by Disney and AT&T. It wasn’t that I didn’t “know” they had so much debt. I did, because I studied the M&A landscape a lot in 2018. One of the easiest reactions to AT&T acquiring Time-Warner and Comcast overbidding for Sky and forcing Disney to overbid for 21st Century Fox is how much debt these companies now have on their books. Let’s look at that in chart form: 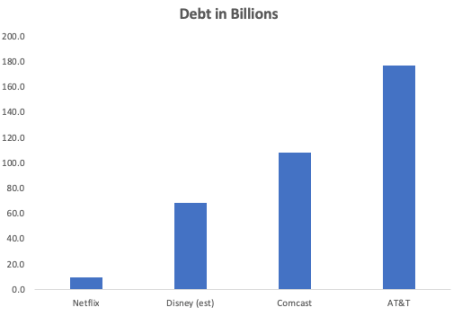 So the worries would be that if the country goes into a recession, that debt makes life a lot harder on companies with a lot of debt who need to service that debt. Is this harder for the traditional entertainment companies or Netflix?

I don’t know, but I worry the most about Netflix. At least the other companies have a lot of incoming cash. Netflix doesn’t have that. It may be “recession resistant” (if the economy tanks, people cut the cord, so more cash flow), but it is needs cash to continue to pay their ongoing operations. The entertainment companies don’t have that immediate need. If credit markets freeze, Netflix is likely hardest hit.