Welcome back from the quiet period. Hollywood’s traditional two week break that starts early and ends late, turning two weeks into four weeks of time off every year. Since no one was doing anything, we had a pretty quiet period. Which means we can linger on a longer story…

It would be fun to put “$11.9 billion” in context with a chart, wouldn’t it? I loved the days when US box office was $10 billion because it was a fun round now. So, here’s the “revenue” figures for some parts of entertainment: 2019 domestic box office, international box office, Netflix, Comcast-NBCU, AT&T/Time-Warner and Disney revenue: 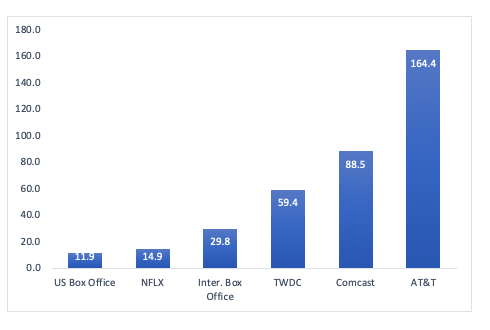 I love this chart because I have no idea what to make of it. On the one hand, clearly movies don’t drive as much revenue as TV, because look at Comcast and AT&T. Those are primarily “pipes” companies, but they with Disney make a ton of money on TV shows and network sub fees. On the other hand, $29.8 billion in global box office is a lot of money too. If theatrical really did vanish overnight, the effects would be profound. So for the foreseeable future, theatrical movies will be a small, but important part of the economics of film.

That all said, technically this whole debate is misinformed. Because, inflation. Most looks at box office treat inflation as a non-factor. While ticket price inflation is usually mentioned, it isn’t explicitly calculated. That’s why I recommend this thread by Matthew Ball on Twitter or Kevin Drum’s blog for his usual exhortations to account for inflation. (Including this recent plea.)

There is also the “MovePass” of it all. MoviePass peaked at 3 million customers, all seeing movies, but MoviePass paid full-freight on the tickets it purchased, losing money to do so. So the question is did MoviePass drive the uptick over 2017 levels, or the huge string of hits in Black Panther, Avengers, Crazy Rich Asians and Venom? We’ll probably never figure it out, but both the Vox and Hollywood Reporter summaries (both goodreads) mention this phenomenon.

In summary, those looking for theatrical “slow slide to oblivion” have to wait another year. Meanwhile, both traditional and digital players can marshall data to support their side (Theaters are dead! Theaters live!). My caution for decision-makers is to not mistake “declining sales” to “zero sales”. You can still make plenty of money off declining sales. Moreover, while I’m generally bearish on subscription models, I can see a path where “second weekend” movies or smaller films get bundled into a subscription pack by AMC, Cinemark, Regal and others. This could protect the increasingly important tent-poles, while driving more trips to the theaters. This will have less impact on revenue, but help with ticket sales. Moreover, it has to be theaters running the plan. Third parties just don’t’ have the data or incentives to get it right.

So box office is up, but who won the year?

Well, Disney. Duh. But Warner Bros. and Universal didn’t have bad years. Warner Bros. had surprises in Crazy Rich Asians and A Star is Born. Universal had Jurassic World and Halloween. (As someone pointed out on Twitter, The Grinch has made a lot of money with little buzz.)

As Richard Rushfield pointed out in a past Ankler, Sony had a not bad “13 months” factoring in Jumanj, Venom and Into the Spiderverse. Paramount had Mission: Impossible and A Quiet Place. So overall it’s tough year to throw dirt on the movie studios’ graves. For the full coverage, though, read Jeff’s whole piece.

(What about the streamers grades? Honestly, we don’t have the data to judge. Sorry, but “buzz” isn’t the same thing as revenue or viewers or profitability.)

One fun topic that almost made the “most important” category was that a series of works from 1923 finally entered the public domain. Why? Because the copyright extension last passed  21 years ago finally expired for those works. As you can see on my top bar, I love thinking about this issue as I wrote about in “Don’t Kill Mickey Mouse: A Simple Solution to Copyright EVERYONE Will Love”.

Given that copyright is now expiring on its own, this would seem to obviate the need for that opinion piece. With the success of previous campaigns against PIPA and SOPA, there is now a movement fighting back against huge copyright holders and they will fight any extensions of copyright protection for companies like Disney and Warner Bros. So, if we just wait everything will be fine.

I still can’t see a world where Disney lets even something like Steamboat Willie into the public domain. Yes, they can use trademark protection, but that still isn’t universal. Same with the classic Snow White. I just can’t see that.

Moreover, waiting seventy years after the death of the creator is also madness. That’s so long and really hurts creativity, while rewarding people only tangentially involved in the creation (the heirs and relations of authors and musicians and such). We need a better system, and paying people to protect IP makes a lot more sense, while freeing a lot of old IP. Let’s get on this Congress!

As I mentioned in my last article, I’ve been enjoying year end reviews because often they get a better picture of what really happened in a given year. The news of the day pieces just often lose the longer term flavor. (Though I still haven’t found as many in-depth articles on entertainment companies as I would like.) Here are the longer articles I did really appreciate:

(This lays out the biggest questions I’d honestly will try to answer in 2019.)

What’s Next? Predictions for Media and Entertainment by Julia Boorstein

(Similar to above, this article sketches out the larger trends, with a nod to declining M&A in 2019.)

Apple 2018 Year in Review by Jeremy Horwitz on VentureBeat

(“Will Apple enter the content biz?” is the question plaguing the industry. Apple is a behemoth so this summary is a good read about all their different products/moments in 2018.)

(Having seen how much TV viewing is done in living rooms, the next console war will have ramifications for all of TV & film.)