Let me paint a nightmare scenario:

“Evil corporations realize they have extremely valuable intellectual property. Famous characters like Superman, Batman, and most of all, Mickey Mouse. These corporations employ armies of lawyers and lobbyists and they get to work on Congress. They extend the copyright on all works indefinitely. This means potentially millions or tens of millions of works that could enter the public domain…never do.

Now imagine the other side:

“Mickey Mouse enters the public domain. There is a flood of Disney merchandise on the market. Evil companies have him start doing pornography. Disney loses billions in market capitalization.

If I haven’t written it before, I hate dilemmas. Not the idea of having to choose between two bad options, but the concept of dilemmas. Usually “either or” ethical scenarios are the stuff of lazy polemicists. They force someone’s opinion on you by making it seem inevitable.

The above two scenarios do that perfectly. Nightmare scenario one is corporations run amok, ruining creativity for the rest of us. Nightmare scenario two feels better to me, but is still pretty yucky. I don’t want Mickey Mouse in pornography either.

Neither side will win. Again, the “free the content” folks—who I’ve mostly heard on On The Media or read in blogs—have great points about creativity. But being an absolutist on this issue will just drive them into the brick wall of giant corporations with billions on the line. They will NOT give up without a fight. As a result, the corporations have taken the hardest of hard lines. As a result…

Copyright protection dates back to 1923.

To quote TV pitch men, there has to be a better way.

Think about that, for 150 years of American history, copyright extended for a creators live, then it absolutely froze at an arbitrary date that happens to protect Mickey Mouse and Winnie the Pooh. As long as that is the case, we can’t push the copyright law forward in time. Disney won’t let us.

The key to break through the logjam is to understand the true losers. One of my themes of this website will be “understand the economic incentives.” Most problems are clarified, if not solved, when you do this. So while there could be lots of winners by improving copyright, there are some clear losers who will fight this tooth and nail. The studios like Disney, Warner Bros. and others could hemorrhage billions in market capitalization.

So what we need a compromise. We need to realize that the two positions staked out currently in the debate are NOT the only two positions we could have. We could craft a proposal that will free millions of creative works from copyright jail, while allowing Disney and the studios to keep control of their IP, and we can do it for free. In fact, we’ll make some money on it. So here it, trying to get it to fit onto a post card to make Paul Ryan happy:

Copyright extends for a creators lifetime, plus 12 years for the family upon death…

…unless the copyright holders pay a fee to the federal government…

…which extends the copyright protection an additional five years.

The key is the amount is very low, but just high enough to make it not worth extending for every piece of IP. The mathematical genius behind this relates to my series on “Logarithmic Distribution of Returns”, the law of entertainment. Most things created aren’t worth very much at all, but a handful of things are worth exponentially more. So Disney would pay to protect Mickey Mouse, but thousands of other movies and shorts from the 1920s will be free to enter the public domain.

Which isn’t to say those works aren’t valueless. One of the most interesting fields is music. Tens of thousands of songs were made between 1926 and 1940, and the vast majority—again logarithmic returns—earn next to nothing for their conglomerates in any given year. These songs could have a new life on streaming services or remixed into new songs. But woe to the producer who steals a bit of a century old jazz song that becomes a hit song and is now being sued by a conglomerate (who wouldn’t have licensed the rights in the first place!).

This solution just leverages another old theme of mine: value creation versus value capture. By making a line that protects the most valuable characters, the companies remain incentivized to keep them healthy and will maximize the value produced. So Warner Bros will protect DC comics and Disney will protect Marvel, Star Wars and Mickey Mouse. But right now their policies to protect their interests have locked up all of old IP in copyright jail. In other words, to protect some value, they capture all the rest. By freeing that, we create more value for everyone.

There are some details to work out. We’d phase this in over time. If we passed the law today, I’d say that it would go into effect in 2020, but the initial period would need to catch up how long our copyright law has been truly messed up. So the initial batch would cover 1926-1940, a fourteen year period. After seeing how that worked, two years later would be another ten year jump, 1940 to 1950 and so on over time. Until we’re all caught up.

The next detail is getting the registration’s right. How would aspiring authors, remixers, filmmakers and businesses who want to leverage this new found treasure trove of public domain works know what is and isn’t protected? Well, we’ll build a database where companies can go to easily register their works. And here’s the thing: the five biggest technology companies in America will build this for free!

Work for free? Why?

Because right now they’re under a lot of scrutiny. Facebook with its scandals, Amazon with its size, Google with its China stuff. So here’s the thing, the government would provide this carrot/stick: if the FAANGS don’t help build the easily searchable database—that must work really well—then they will never have access to the newly freed works!

These five giant tech companies stand to benefit the most from this explosion of free content on their platforms. Netflix gets tons of old movies; Apple can stream tons of new songs; Amazon can put the books on Kindle; Google does it all; I’d add in Facebook because who knows what crazy thing they’ll do next? Meanwhile, we all get an easy to use database to find old works that are no longer in copyright.

This database won’t contain all works ever created…but I wouldn’t rule that out. I would consider a rule that companies must also register works they DON’T plan to extend as part of the price for giving them this content extension.

There would be some push back, but much less than well-heeled studio conglomerates. The people who would push back are the mostly relatives of someone who generated valuable IP. My go to example is the Fitzgerald estate. None of F. Scott Fitzgerald’s kids did any work to make his IP. They can just demand fees for his books because he is still a name. They would be right on the cusp of debating whether all of his books are worth the $10,000 per five year extensions. So would say some musicians and music companies who would have to determine which parts of their catalogue are really generating $1,000 over a five year period.

But the great thing is that instead of going up against corporate behemoths, we’re not going up against smaller family estates that have way less money, power, influence and lawyers. They will complain, but given the explosion of free content, the new business generated and the new revenue for the government (minimal, but would pay for this program) no one will care.

Studios win (Disney, you should spearhead this effort to protect yourself forever!) with their IP safe, tech giants win with tons of new content, and society wins with more coherent copyright law. So what’s stopping us? Let’s do it. 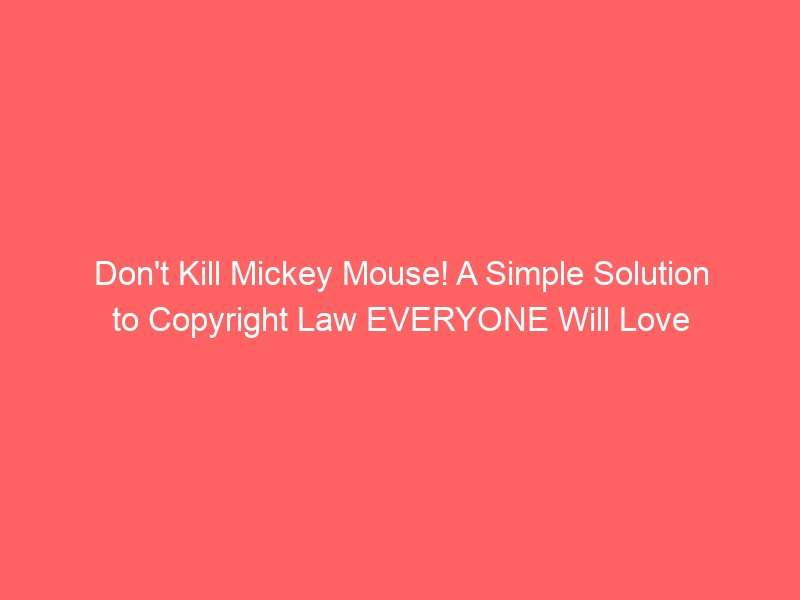