(Read Part I and Part II here and here.

The only downside of my NBA-to-Entertainment translator was that I only had 30 NBA teams to unleash my snark. In entertainment, we have many more companies that just couldn’t make the cut. So I had to expand the world of the NBA just a little bit to fit in a few remaining “just too perfect to exclude” translations.

Here you go: the Rest.

I’m a hard core basketball fan like many people. But if you asked me to tell you how many teams are in the G-League, I couldn’t do it. (It turns out there are 27.)

I follow entertainment pretty closely. I couldn’t tell you how many channels Discovery (with Scripps post acquisition) and A&E Networks have either. So I looked it up:

19! For just Discovery (with Scripps).

That’s more than I would have guessed for both, and you know what, that gives these two a lot in common. Sure, they have a lot of channels/teams you can’t name, but they keep doing their thing. (The difference is a lot of Americans still watch a lot of these channels, which can’t be said for the G-League.)

Not the whole enterprise, just the part run by Kevin Feige. Consider these fun connections:

Both LeBron and Marvel started making waves in the early 2000s. Spider-man and X-Men made a lot of news, and you could tell something was brewing, just as LeBron was being called the greatest high school prospect in the world. Marvel Studios released the mammoth hit Iron Man in 2009, the first year LeBron won the MVP. Marvel Studios released the mammoth world building Avengers in 2012, the first year LeBrown won a championship. In 2014, nobody thought LeBron would leave Miami, but he did, and no one thought Guardians of the Galaxy would be a smash hit, but it was. Either way, both LeBrown and his 14 straight All NBA appearances is the equivalent of Marvel Studios launching all successful films since 2009.

In the present times, LeBron coming to the Lakers was the event of the season, like Black Panther or Avengers: Infinity War, take your pick.

Yet, the questions remain for the future. Can LeBron’s health last? Will Kevin Feige keep churning out the hits? So enjoy the ride of Marvel Studios and LeBron while it lasts.

Their spirits live on! The ABA brought us the Brooklyn Nets, Denver Nuggets, Indiana Pacers and San Antonio Spurs. And 21st Century Fox will live on in Avatar and Spider-Man.

But in name? One has disappeared and the other soon will.

Fine, United Artists isn’t quite dead. Technically, the internet tells me MGM owns them. (And they tried to relaunch that brand with Tom Cruise ten years ago. That happened!)

They are on life support in a lot of the same way that the “Supersonics” are only dead until one Seattle billionaire brings them a team. Literally, a rich oil tycoon bought the Seattle franchise and moved it to Oklahoma City, so someday someone who cares about making money will move them back.

In summation, Seattle will return from the ashes someday and maybe UA will too.

And1 is the brand of basketball mainly featuring Youtube videos of players “crossing up” other players with flashy moves to the “ohs” and “ahs” of the crowd. Blumhouse is the cross up artist of feature films. Here’s a horror movie that no one wants and it grosses hundreds of millions. Cross up. Oscar films? Here’s another two. Cross Up. New franchises? Check. Old franchises? Check.

Yet, size does matter and Blumhouse isn’t a full-fledged studio, so I just can’t put it as high as the other major studios. (By which I do not mean to denigrate what they have done. Blumhouse has one of the few business models in the game.)

Does either of the above entities belong in “the conversation”? Not quite yet, despite all the flashy names and financial backing.

Disney’s massive success at the box office the last few years has been fueled by three distinct brands: Lucasfilm, Marvel and Pixar. So much so that it’s hard to find NBA teams that match the rise of those three institutions…which is why only Lucasfilm made it into the official “NBA Translator” and Marvel made it in today as LeBrown.

For Pixar, I looked for a team that dominated over an extended period of time. Not just dominated, but I mean was a top top team every single year. And in the NBA I just don’t have that…but I do in college! Since John Calipari has taken over he’s created a string of hit NBA players the way Pixar has had a string of hit movies going back to Toy Story.

Now, the only difference is that Pixar (and later Disney Animation) fired the architect of Pixar, John Lasseter, a man who was incredibly dirty. John Calipari is firmly entrenched at University of Kentucky. And I would never accuse John Calipari of being a dirty coach, in the paying players type of way. Oh wait, yes I would. He hasn’t just been sanctioned by the NCAA once, but twice at both of his previous coaching gigs.

No one likes either of these entities for messing with the game (players about the referees) or creative (artists about the MPAA). 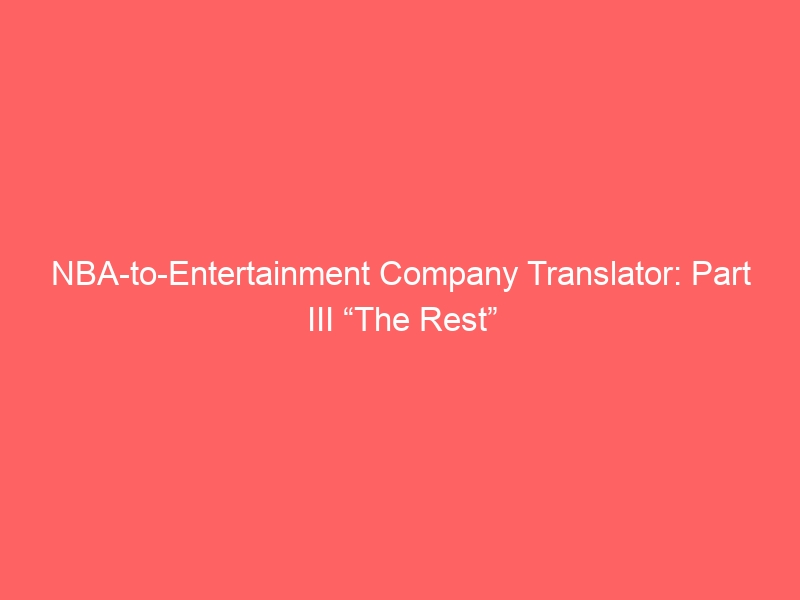