(This is Part II of a multi-part series answering the question: “How Much Money Did Disney Make on the Lucasfilm deal?” Previous sections are here:

Today, we continue our series evaluating the Disney purchase of Lucasfilm for $4 billion dollars. (Read the introduction here.) I can hear some of you saying, “Why do you even need to do that analysis? Why did you waste all those words on a question we already know the answer to!” And then you would point to this Hollywood Reporter headline:

I mean, if you want to know why I’m writing this series, that article—or more precisely that terrible headline—explains it. Even the article points out that Disney won’t keep all of the $4 billion in box office, and it doesn’t account for production costs or marketing. So the article itself acknowledges that the headline is as flashy as it is misleading. (And I would throw in that it doesn’t factor in the time value of money, the centerpiece of Part I’s analysis.)

Lucasfilm and Disney are doing well, but how well? More precisely, how much cash did they make on these movies? How well do we think they will do going forward? And could they start losing money?

How to Analyze Lucasfilm Movie Performance

I’ve had a lot of “fun” trying to figure out how to organize this part of my analysis. There’s a lot to go over and explain and justify. I’m really worried that, without realizing it, I’ll tip into text book territory and all my easily distracted Baby Boomer readers will go back to email. (What? Should I have put easily distracted Millennials? I’ll save that for another time.)

The difficulty stems in part from having to differentiate between what I know, what I can estimate, and what I have to, frankly, guess about Star Wars films. And that realization gave me the organization for the rest of the movie section. When I say “know”, I mean that we have the results of how well a movie did. We know (roughly) how movies that have been released did at the box office. “Estimate” means films we know are coming out (or have a high confidence that they will come out) but we have to estimate how well they will do. And all the other potential films? Those are guesses and we’ll need to build scenarios to cover the various options.

So let’s start with what we know: the first four films.

What we know: How well did the first four new Star Wars films do?

Let’s be clear on what “know” means here. It doesn’t mean I have a 100% accurate accounting statement of the films. But since we know the box office results, we have a very strong idea of total revenue and we can make really good assumptions on productions and costs. Take that all together and I can make a single estimate for how well each film did.

But we have some explaining about how I got those estimates.

To be overly simple, I’m going to just take my “greenlight/windowing model” and recreate it for the four Star Wars films released through 2018. The only tweak to the model from my “Appendix: Feature Film Financials Explained!” is I’ve switched the order to resemble more of a traditional income statement: the revenues are at the top, and the costs come next.

We start with box office, and this is super easy to find: go to Box Office Mojo or The Numbers. Then download the information and throw it into the model. I’ll use The Force Awakens to show the results of this method. So here is it’s box office results. Once we have that number, we can derive theatrical rentals by using our 50% and 35% rules. 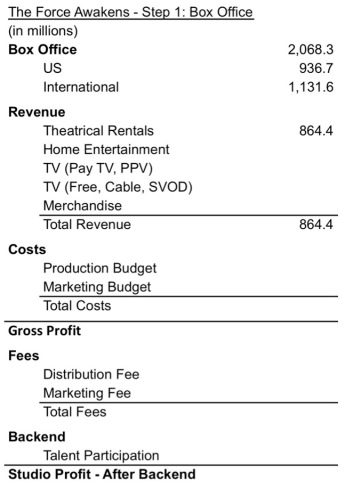 From theatrical rentals, as I explained, we can project our other revenue streams. Again, the actual numbers will diverge in real life for various reasons, but on average these are pretty accurate. For instance, The Force Awakens was the largest film of the year when it came out (and 3rd all time worldwide; 1st in US domestic). As a result, it made all the monies: it was the largest film of the year in in home entertainment, and TNT is paying a huge fee to air it right now as well. This is why everything is derived from box office performance: the highest grossing movie in box office usually is the highest grossing movie in every window. Right now I project that The Force Awakens did $2.7 billion in total revenue off $2.0 billion in total box office. 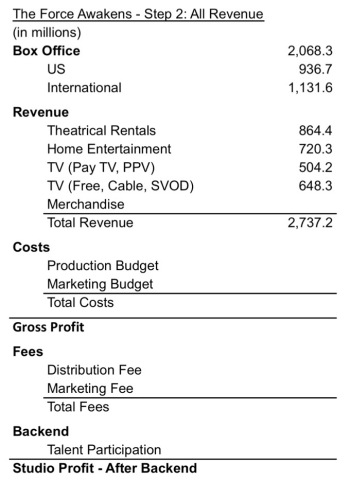 Projecting costs isn’t as easy. I would have guessed that The Force Awakens and its ilk cost well north of $200 million to make, and I found places on the internet backing up that guess. But I also found numbers much higher, the highest from The Numbers which forecast a negative cost of about $306 million for The Force Awakens. Hmm. (The other films from The Last Jedi to Solo have similarly wide production budget ranges.)

What to do? Again, this is one of multiple times where judgement is required. I like the $300 million budget for each film. I think these films cost a tremendous amount to make and don’t want to shy away from that. So $300 million it is, but I will add a growth rate of 3%, so the production budgets grow slightly faster than inflation as we project for future films. In the case that I may be high by $40-50 million on say The Force Awakens or The Last Jedi, I think I may be low on the films with significant re-shoots like Rogue One. That said, since I heard Solo might have re-shot 85% of that film, I’m bumping it’s production costs up to $350 million.

For marketing costs, I have another rule of thumb: marketing is about half the negative cost. This would get us to $150 million of marketing for The Force Awakens. I found one place that estimated nearly this with an estimated $175 million budget for The Force Awakens. I’ve seen estimates as high as $350 million, stemming from an unclear sentence in Vanity Fair. Again, I think the budgets on everything related to these films are huge (partly to ensure they don’t flop), so I’m going to go around $200 million for marketing costs. I may be too low here, but I think I was also a bit high on the production costs side. This number also matches the Hollywood Reporter article on blockbuster films’ marketing budgets.

Another reason I tend towards the low side on marketing is because Disney leverages sponsorship deals for a ton of free marketing. This isn’t a Disney innovation; Lucasfilm has always done leveraged free marketing. The Phantom Menace partnered with products ranging from chips to Pepsi cans to toys for its marketing campaign. According to this article by AdAge using iSpot.tv data, as of December 10th 2015, Disney had only paid for $19 million in ad buys in the US, whereas its partners had paid for nearly $98.4 million in ad buys. (Roughly half for co-branding advertisements and half by licensing and merchandise partners.)

Calculating talent participation for a specific film is a lot tougher nut to crack than anything yet. It is in agents and studios interests to keep this information confidential, so they do. Searching the internets, I found a lot of articles about how much Harrison Ford got paid, but not nearly as many on how much J.J. Abrams got paid. The fresh talent—Daniel Boyega who plays Finn, Daisy Ridley who plays Rey—also had much lower quotes, from what I read. In my experience, talent participations can easily pass 10% or more depending on the talent. In some cases, talent won’t bother with fees and collect “dollar one gross” or their profit straight from the box office, which I assume happened here. (Talk to Robert Downey Jr. regarding Marvel for the best proof that this still happens for top talent; Tom Cruise was the king of dollar one gross in the 1990s and early 2000s.)

I’m going to assume that talent will share in 20% of the profits of the film after fees. I did some minor testing on the sensitivity, and being off by 10% either way doesn’t effect the end profitability as much as the huge box office numbers, so I think we’re safe here with this assumption.

So you’ve seen all my work. (Distribution and marketing fees are mostly baked in so I didn’t bother searching for those.) Now let’s bust out the windowing/greenlight/accounting model for The Force Awakens:

Now, we can repeat the process for all four films which have been released so far, making some adjustments and tweaks to my estimates. What about Solo, which is still in theaters? It hasn’t actually finished its box office run, so I made an assumption. I’ll talk about it in the next section, but I’m assuming it does $365 million in total box office, split $205 million for domestic and $160 million for international based on the latest tracking.

So there we have it, our accounting models for the four Star Wars films through 2018, based on their actual box office, or an updating estimate, in Solo’s case. The biggest thing that jumps out is the overwhelming success of the first four films. When my gut said this deal was a blockbuster, that’s what I meant. Through Solo, we’re looking at something like $4.8 billion in global box office, which will generate $3.7 billion in (unadjusted) gross profits off $6.4 billion in total revenue.

I feel like on an iPhone in the text message, the “congrats balloons” would go off right now.

Hey Entertainment Strategy Guy, you might say, we just paid back our investment in only 5 years! To which I would say, “Ah, don’t forget the time value of money.” This is why we have to factor in when costs go out and when revenues come in. So let’s have that, in another table.

When we discount for the 8% cost of capital for media-entertainment, far from making our money back, we’re still 37% short, having earned $2.5 billion in 2012 cash terms. Don’t get me wrong: returning 63% of the value in just six years in just a single line of business is still really damn impressive. But we aren’t in Scrooge McDuck jumping in a vault of money territory yet.

But we could earn our money back in just this one line of business, as you would point out next if we were really were having a conversation, if we count future movies. We haven’t factored in all the other Star Wars movies yet to come. That’s for next time. (Which may be tomorrow or next week.)