Other Thoughts That Didn’t Make It In

Was I too strong in calling this series, “Debunking the M&A Tidal Wave in Media and Entertainment?”

I don’t think so.

I want emphasize the “think” in that previous sentences. I’ve thought about this a lot. I mean, asked myself many, many, many times, “Wait, are you sure there won’t be a tidal wave surge in M&A now that the Justice Department lost in its AT&T battle? Even if M&A has been high the last few years, couldn’t it get higher? Are you implying you think M&A could go down in the future?”

Upon reflection—all that thinking, hat tip to iFanboy—and yes, I think I am appropriate in calling this a debunking. Certain narratives catch hold—coincidentally, like a tidal wave—and most everyone tends to repeat that narrative. The internet started this phenomena, but social media like Facebook and Twitter and Reddit amplify it.

To sum up all I’ve learned, here’s the brief history of M&A in media and entertainment:

– Media and entertainment (and communications/internet) has been consolidating since the 1980s, like all industry.
– After the recovery from the Great Recession, media and entertainment companies began consolidating again.
– By my numbers, the growth in M&A was somewhere between 8%-25% per year in total deal value (depending on the years you pick) and mega-deals (deals over $1 billion in value) increased from 8 in 2011 to 18 in 2017.
– These deals included both horizontal mergers (within the same industry), conglomerations expanding (conglomerates continuing to acquire new businesses) and vertical mergers (within different industries, including distributors such as cable or internet firms acquiring media and entertainment companies).
– Consolidation likely would have continued even if the Justice Department had won their lawsuit preventing the giant and horizontal AT&T-Time Warner Merger.

Phew. Sorry, I had to get that out.

Knowing what we know above, we can use that as our baseline. For any new information on M&A, we can update our priors, to use Nate Silver speak. Basically, if a new deal is announced or a current deal opposed by the government, we have a solid context to understand its impact on the larger M&A in media and entertainment (and communication/distributors/tech/social media) landscape.

For today, any time I dive super deep into a topic, I end up with a bunch of stray thoughts that don’t quite fit in any of my other articles. Today is the catch all round up of those pieces.

Other Thought 1: The Chaos of the Trump Administration

Ignoring the politics of the current administration—and how can you?—what does President Trump and Gary Cohn/Ajit Pai/Wilbur Ross mean for how entertainment companies conduct business? Really, the daily tweets and outrages for liberals or the perceived economic boom times for conservatives matter much less for how he had changed the regulatory environment for business.

But some of those Trump tweets matter. Like how he tweeted opposing the AT&T merger, praising the Disney-21st Century Fox merger and supporting Sinclair/Tribune. In each case, either base political calculations or personal relationships determined his support, not larger idealistic concerns (either free market or pro-consumer). In AT&T’s case, he hates CNN. In Disney’s case, he loves Rupert Murdoch, whose Fox News also supports him. In Sinclair, I think he knows he has a friendly voice supporting his policies.

Uncertainty is the key, along with the certainty that the key is winning Trump by pledging allegiance to him. That’s how companies can win in the short term, while America’s economy moves towards a rent-seeking/crony capitalist future that curtails economic growth. In the mean time, M&A will proceed apace as the key to execution means wooing Trumps favor. Before you decide to do a deal, think, how do we spin this to make Trump look good, while crossing our fingers Democrats don’t punish us for that?

Other Thought 2: What decisions can we make off this information?

Imagine you’re a major executive at a major studio, communications provider (cable, satellite or telco) or production company. Maybe you’re the boss or the head of his/her corporate strategy or business development team. The key question following a judge’s approval of the AT&T-Time Warner merger is: how should this influence our decision-making going forward?

Now, if you build it, they will come. In business, this means if you build a team with a mission, that team will recommend decisions in its interest. If you have a team devoted to assessing and executing mergers & acquisitions, they’ll probably recommend that you make a lot of mergers & acquisitions. That team—and its likely influential leader—would therefore recommend most CEOs be aggressive in their deal making. Hence, they probably read a lot into the AT&T merger decision as the green light for future mergers.

If a merger with a competitor or supplier or other company makes sense economically, it probably made sense no matter which way this decision went. Now, it likely would change the probability on one line of the economic model—the line one the costs if the merger fails—but I would argue that would only apply to deals that almost exactly mimic Comcast-NBCU/AT&T-Time Warner style deals, meaning it would mainly apply to Comcast. And I don’t think Comcast CEO Brian Roberts has any desire to slow down his deal-making.

What about the information I’ve provided showing the huge surge in deal-making going on? Should this influence executives? Maybe.

The case would be strategic. If everyone around you is getting larger, then to continue to be able to negotiate with suppliers or be able to gain a presence in the marketplace, you may need size to compete. If you’re Discovery and Scripps, facing a world with shrinking cable subscribers, doubling the number of channels under negotiations may help keep your affiliate fees higher. Same with movie studios: Disney will be able to negotiate great revenue shares with theaters if they own 50% of the box office, so maybe you need size to compete with that.

But for that strategic case, I could trot out an early version of my “Theme 3: Strategy is Numbers!” At the end of the day, you don’t win in entertainment by simply being the largest player in the world. This isn’t a board game like Risk or Settlers of Cataan where simply being the biggest or lasting the longest means you win. You win by generating cash for your shareholders.

If the deals to get bigger end up costing you more in interest payments than they return in cash, then shareholders will lose money, even with the size. This is usually exacerbated by vertical deals, but all deals risk costing shareholders money. If anything, the frothier the M&A environment, the higher the prices paid, which increase the likelihood that deals don’t make economic sense.
In all, M&A in the larger sphere is interesting, but not determinative on the decisions you need to make as a decision-maker.

Other Thought 3: I’m even more skeptical of conclusions from the M&A data than I was before.

I can’t get over how noisy M&A data is. So noisy.

When you read sweeping conclusions in breathless reports about M&A, remember this. The biggest deals have a huge impact, but are really small in number, while the timing can fluctuate a lot over a given year, which can drastically change the conclusions. a lot, impacting any quarterly or yearly analysis.

The first impact of this uncertainty is to really hinder drawing trends underneath the data. Like say, “Oh look, the majority of deals are about developing innovation” or “achieving economics of scale” or that deals tend to be horizontal or vertical in nature. I’m also hesitant to point to explanations for why M&A is happening, besides that M&A is the natural state of industry in America.

Take the explanation that executives are fearful of the rise of Netflix, Youtube, and Amazon and disruptive business models. That’s a great narrative. But consider that Comcast tried to buy Disney in 2004, did buy NBC-Universal in 2010 and Disney has been buying big new businesses such as Pixar, Marvel, Lucasfilm and Maker Studios. If we tried to quantify this trend, we just couldn’t do it.

The second impact is I tend to look skeptically at any explanation that M&A is increasing year over year based on the most recent data. Again, it just won’t hold up to analytic scrutiny if you can move one or two deals and change the whole picture.

In Part IV of this series, I pointed out that in 2007, the number of M&A deals exceeded 1,000. That’s huge, compared to the 800 or so deals we’ve averaged in most of the 2010s. Even though I dismissed this number when making my prediction, it doesn’t mean it doesn’t beg for an explanation.

I have two theories.

Theory 1: 2007 to 2008 was the peak of consolidation of bigger players of smaller mom and pop shops. Basically, this theory says in the 2000s small groups of cable providers, radio stations and independent broadcasters were swallowed up by larger groups. While we focus on the giants of cable, we forget that in the 2000s there were hundreds of cable companies, maybe even thousands. Yet a lot have been swallowed up by the larger players. Now, these deals were sometimes for cable providers as small as a few hundred thousand people, so they just didn’t rate a huge value. Now that they are gone, the number of deals has gone down, but the total value has gone up.

Theory 2: In the 2007 financial crisis, some businesses were divesting not merging. This makes more sense, and I believe one article mentioned this was happening, but honestly I don’t have the data to prove it. If I had Thomson-Reuters data, this is what I would definitely explore.
So I can’t prove either theory above, but they would make for interesting future study.

Other Thought 5: Horizontal versus vertical merger discussions were overblown.

One of the legal hot takes was that the Justice Department had typically ignored vertical mergers and this is what made the move against AT&T so bold. I have two counters.

First, the Justice Department didn’t do a great job of stopping horizontal mergers either.

In my data set, I see a ton of horizontal mergers that went through without scrutiny. In just 2016 and 2017, we saw announced horizontal mergers in broadcast (Sinclair and Tribune), theaters (Cineworld and Regal; Dalian Wanda with two theater chains), radio (Entercom and CBS Radio), conglomerate (Disney and 21st Century Fox), networks (Discovery and Scripps), and other cable/cellular companies, most of which passed scrutiny. So the Justice Department hasn’t done a great job stopping horizontal mergers, which makes the focus on vertical mergers…strange.

Second, the Justice Department has looked skeptical at vertical mergers. Namely, the Comcast-NBCUniversal deal, that it ultimately blessed with many conditions.

Overall, this is one of those data problems where we shouldn’t rely on the sparse data too much. There just aren’t a ton of examples and other factors may explain the conclusions better. Like say size. Many vertical deals just involve really small companies being acquired.

Honestly, just because this vertical deal was successful at trial doesn’t mean future deals will be as well. If cable and satellite companies keep increasing prices after deals clear approval—as both Comcast and AT&T have done—well a future government many decide that these deals aren’t great for consumers.

And wouldn’t that be something. 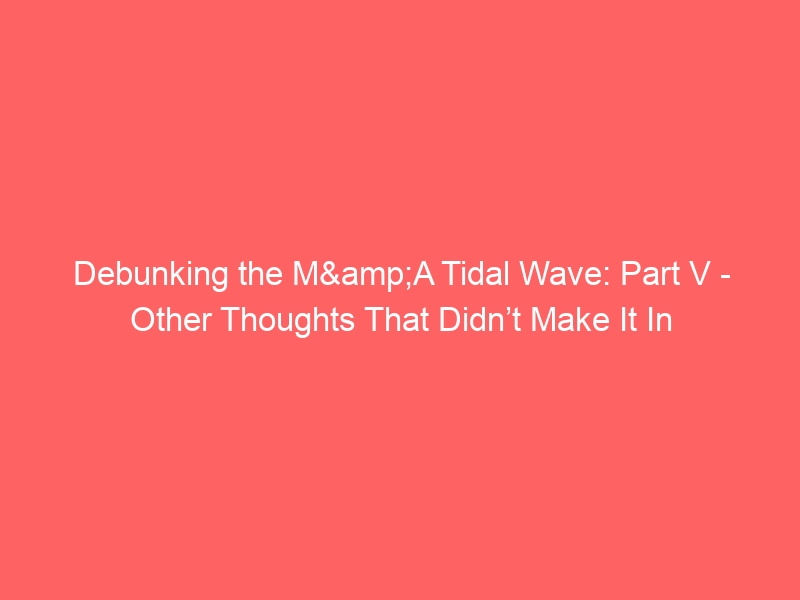