What Does Hot “Ad” Summer Mean for Entertainment?

Spielberg. The Supreme Court and NCAA. Conan ending his TV show. This week in entertainment didn’t want for big names. But were any of them truly the “most important” story of the week? No. For that, let’s pull back and look at a slightly longer view.

(Sign up for my newsletter to get all my column, streaming ratings report and links to my writing in your inbox.)

Most Important Story of the Week – Who Are the Winners and Losers of an Advertising Boom in Entertainment?

A couple of months back, I saw a few headlines covering an upcoming boom:

But this backs a common consensus and past historical examples of economic activity after a recession. When a recession first hits, one of the first victims is marketing spend. If less folks are buying, you spend less to attract their dollars. As the economy comes back, firms have more profits and working capital to spend on advertising.

In this case, though, the marketing firm’s smoke is reflecting the mouldering embers of a potential advertising fire. Maybe even an inferno. If this happens, a boom in advertising will directly benefit the entertainment industry. Where else do you advertise but entertainment? (Only half kidding.)

That will leave some clear winners from this trend. And maybe a tangential loser. Let’s explain.

Anyone whose business is driven by advertising is a winner here. And Youtube is the biggest digital player in ad-supported streaming. See Nielsen’s The Gauge for those gory details:

All advertising-based streamers–be they AVODs or FASTs, depending on your terminology–are winners here. But being the biggest advertiser by far really, really, really helps. Youtube is on track to make as much revenue as Netflix this year; an advertising boom could push that even higher.

Next up among the streaming advertising power players are the Operating System/Device Owners, who I call “bundlers”. (Read my definition of bundlers here and why they’re so powerful.) Given that they control a majority of streaming eyeballs on televisions, Amazon and Roku can position their free channels in front of a lot of eyeballs. Add in the data they collect from all viewing on their devices–and add in Amazon’s position as biggest ecommerce site in the land–and they have a powerful pitch to advertisers.

Like Youtube, if advertisers need inventory to sell, those with that inventory are well positioned to charge higher rates. The challenge for the FASTs is to keep getting the eyeballs in the first place. The fundamental rule of advertising is you charge a fee for every thousand eyeballs. (CPM is “Cost per mille”, which means price per thousand.) To sell advertising to thousands of eyeballs, you need viewership by thousands of eyeballs!

While Youtube is already dominant and Roku/IMDb TV have built in advantages, the FASTs are trying to catch up. All the FASTs claim tens of millions of unique monthly viewers, but what is that in actual volume? An advertising boom would allow them to spend more–subtly ironically?–on marketing themselves to get that volume up. In other words, a boom like this is great for an upstart.

Winner and Loser – The Legacy Bundle

Look back at The Gauge from a few paragraphs back. Notice that, for all the eyeballs on streaming, that cable and broadcast are still much, much bigger? That’s right: a majority of TV viewing is still boring old linear TV. (Technically, some of the cable and broadcast includes vMVPDs, but you know what I mean.)

The win here is that traditional firms can continue to charge some of the highest advertising rates across platforms. The loss is that it helps their disruptors catch up. So call this a push. But a lucrative temporary push.

Is Netflix a Loser? It Depends on the Streaming Wars Analogy

I don’t want to call out any losers this week. Because a boom in advertising is supply driven, and not really a zero sum game. FASTs can do well, and so can the subscription streamers.

But you can’t win a game you aren’t playing. Which is Netflix’s situation. They don’t sell any advertising at all. Does this offer their competitors an opportunity?

I’d say it depends on what the best analogy is for the streaming wars:

Option 1: Not Having an Air Force in World War II

Essentially, if you didn’t have an air force in World War II, your infantry on the ground had no chance. The two were inextricably linked once air power took over. (As the Army teaches now, it is the Air-Land battlespace.) If this analogy applies, then Netflix’s subscription land army will be at severe threat from free air power.

But I don’t think this analogy works for the streaming wars. You don’t have to have advertising to thrive in entertainment. Ask HBO. They’ve done just fine for several decades. Next analogy.

Option 2: Having Horse Cavalry in World War I

Some armies actually started the first World War I with horse-led cavalry. With machine guns and motors, that didn’t last long. To apply that analogy here, maybe Netflix is missing a key piece of technology. That technology is “linear TV’. Which sounds crazy, since “linear” was cable, and Netflix’s “on-demand’ focus killed linear TV.

Not quite. Over the last few years, linear TV has made a comeback via the FASTs, where people lean back and watch whatever is on using a guide function. And while we don’t have good usage numbers, by all rights this type of linear viewing is growing rapidly. In other words, there is a new piece of battlefield technology–linear viewership, but digital distributed–and Netflix doesn’t have it.

Eh, that goes too far. The big revolution was going from cable to digital, and linear to on-demand. We’re course correcting back a pinch, but not tossing away on-demand viewership. Linear viewing epitomized isn’t really a technological step forward, but a different type of viewing. If anything, the shift back to “linear” viewership is analogous to how horse cavalry became tank cavalry.

So does that mean Netflix needs some tanks? Maybe. But Netflix is building linear-esque features, and like armies in World War I it can adapt quickly. Let’s go to the analogy I do like…

Option 3: Not Having a Navy in World War I

Unlike the air and land, a country can get along just fine in a war without a navy, especially if it doesn’t touch a lot of seas. Think of Russia in both world wars. Did they care about England’s naval supremacy? Not really, since they barely touched the sea. Of course, having both a great navy and a great army is the best of both worlds, but a country can field a phenomenal army and be fine. In both world wars, Germany came close to winning without a dominant navy.

That’s the best Netflix comparison I’d say. (This analogy applies to HBO up until they launched HBO Max too.) Netflix is a phenomenal army with a non-existent navy. There are historical examples of great armies with no navies too, like the Persians, Mongols or French in the Napoleonic era. A company or country can do really well by doing one thing really, really well. Netflix is the industry leader in subscription video. That’s a great army to have for now.

Until they get a navy, though, their upside is limited.

A few folks wanted to hear my thoughts on this. What does it mean for the industry? Is it a game changer? Two things held me back.

LOL, this is a deal for TV movies, exactly what Spielberg said Netflix makes. Amblin’s keeping its Universal deal for theatrical movies. https://t.co/auVJerLfmq

But Rushfield’s best point is this one, which I think is often neglected in entertainment discussions:

In other words, one of the problems with these deals is that a firm with no regards for cost controls can be taken advantage of by studios giving them their worst stuff. Especially if they give the decision-making to the producer. Meaning Amblin can decide what goes to Universal (the most commercial stuff) and what goes to Netflix (everything else).

Lastly, I’d keep emphasizing this is an Amblin deal, not a Spielberg deal. Which is a subtle, but very real distinction. Spielberg has always “executive produced” quite a lot of films and movies of variable quality. What he has directed, though, is his true value. And that’s not claimed in this deal.

Context Update – The UK Gets Aggressive on Regulation for SVOD

News out of the UK is that British regulators are increasingly looking at regulating SVOD platforms. In one report, they’re looking for ratings for publicly-funded programming. In another, they’ll hold SVOD to the same standards they hold broadcasters too. This is probably a sign more than anything that SVOD is maturing and coming under scrutiny. But it is also a warning that companies that have global ambitions will have to deal with many, many government regulators.

One of my favorite joys in entertainment is when multiple companies share similar names. Like Time Warner Cable and Time Warner for several years. Or AMC Theaters and AMC Networks. Please, don’t make things easy for us.

Or Universal Music, which is still owned by Vivendi, the former parent company of NBC-Universal, which is owned by Comcast. Got all that? The news out of France is that Vivendi will spin off Universal Music into its own company via complicated financial engineering.

This could have been the big story of the week, but most of the broad outlines have been working through the legislative process. Mainly, the NCAA acts as a cartel that sets a ceiling on the labor of student athletes, and going forward schools could offer more assistance to students. Longer term, though, many state legislatures are passing even larger bills allowing student athletes to get paid for their “name, image and likeness”. Lots to come on this, but this is a win for student athletes.

Over at ViacomCBS, executives are shuffling around. As usual, I don’t try to draw specific conclusions about who will do well and who won’t. I just don’t know enough to opine, and folks who do are probably responding to perceived friendliness than actual talent.

Generally, though, it is a sign that clearly ViacomCBS still needs more from Paramount+. If things are going very well, you don’t shuffle org chart do you?

This article is a fantastic look at how hard it can be to start “originals”. While it can seem easy to simply start a production company, getting shows to come in on time, on budget and be quality isn’t that easy. Toss in a supply side boom driven by streaming, and this article is a fascinating look at streaming. (Hat tip to All Your Screens Rick Ellis for the link.) 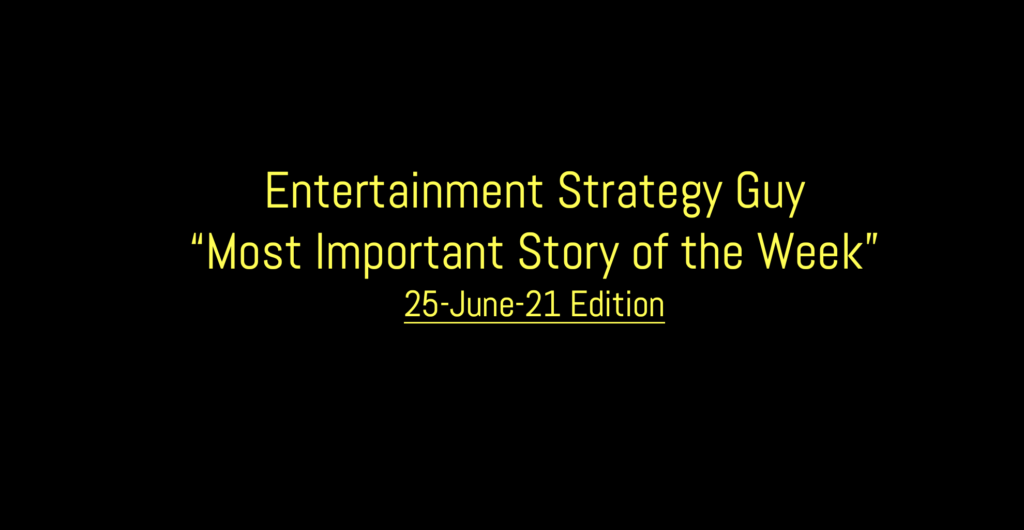