1.2 Million Folks Bought Mulan in the US During It’s Opening Weeknd: The (Not) Definitive Analysis of Disney’s Mulan Experiment

How many folks bought Mulan?

That’s the buzziest question in the streaming wars right now.

Since we don’t know, we’re left to pick at the analytics tea leaves. Fortunately, as each day passes, we’ve got more tea leaves to pick through.

(Partly, the question is relevant because it gets to the buzziest question, “Who’s winning, Tenet or Mulan?”. I’ll answer that on Wednesday.)

Far from throwing my hands up, I’ve started to realize these tea leaves are signal not noise. So if/until Disney tells us otherwise, I’ve done my best to compile all the Mulan on Disney+ data we have. Consider this a “meta-analysis” on Mulan. First, I’ll summarize each data source and what it tells us, next I’ll try to compare this to Trolls: World Tour, then I’ll compare all the data sources, and finally I’ll make my estimates for Mulan’s performance.

(I covered some of these data points in a column and Tweet thread two weeks ago. Today, I’m updating all that data and tossing in my estimates at the end. Also, if you’re new to the EntStrategyGuy, my newsletter goes out every two weeks with links to my writings and the favorite things I read over the last two weeks.)

Don’t want to read the entire thing? Fine, here are the talking points you can deliver confidently without reading the whole article.

— The story about Mulan’s performance is remarkably consistent, if you ensure you are comparing “Apples to Apples”.
— Right now, I’m fairly confident at estimating that its opening weekend Mulan was purchased about 1.2 million times. (Other estimates range between 1 to 1.5 million, giving us a fairly tight range.)
— That implies that it made about $36 million on its opening in total revenue.
— Based on its rapid decay, the Trolls: World Tour comp and the fact that it will only be in PVOD for 8 weeks, I estimate Mulan will generate about $90 million in US sales over its lifetime. (Based on the estimates, this could be as smalls $75 million and as high as $135 million.)

What We Know: 6 Different Sources Tell a Remarkably Similar Story about Mulan

Disney took a big swing by releasing Mulan straight to Disney+ (and only Disney+) for $30 a pop. That left multiple analytics firms—each vying to get new customers to buy its data, a important point about self-interest to note—to fill in the gap. Reelgood said one thing about the popularity; Samba TV said something else; Antenna said something else and then Yahoo took 7 Park’s data in a completely different direction.

The better analogy than tea leaves is actually the old parable about the elephant and the five blind men. Each grabs a different part of the elephant, so feels something different. That applies to our measurement firms. One is measuring viewership; another purchases; another app downloads. Toss in different time periods and sources, and it seems bewildering.

But if you put the whole picture together, it’s not that confusing. After 7 Park put out a great thread clarifying their data this weekend, I’m fairly convinced each source is telling the roughly same picture.

This source is so easy anyone can use it. So be careful. Google tracks search traffic data which has been shown to be a very good proxy for interest. Here’s the time period going back to when Covid-19 started featuring top streaming films:

What’s the simple takeaway? Interest in Hamilton far outpaced anything else in the straight-to-streaming space. (See my article in Decider for details.) This, for me, is the context of Mulan.

However, since we’re triangulating on Disney+, it’s also worth looking at a “Disney+ only” look:

Mulan was big, but paled in comparison to Hamilton.

Antenna tracks subscription behavior across a range of services such as iTunes, Amazon Fire TV, Roku, Google Play and others. Last week, they released their analysis of Mulan’s opening weekend in this great chart:

This is the most skeptical look I have of Mulan’s huge driver in interest from Disney. Yes, it helped boost sign-ups for Disney+, but less than any other major theatrical driver of the last few months. Also note how this aligns/correlates with Google Trend data, but not perfectly. Black is King did better than Mulan, according to Antenna, but Google Trends has lower interest. (Google Trends has more interest in Artemis Fowl than Black is King.)

There is a similar story with Frozen 2 driving more sign-ups than Onward according to Antenna, and Google Trends telling an opposite story. (This explanation is fairly simple: Frozen 2 launched right as lockdowns started, so that’s more the story of lockdowns driving parents to subscriber, not interest in Frozen 2.)

Antenna also  released purchases by sign-up time period. So I took those numbers, and combined them with the above chart to give us this estimate of the average % of subscribers who dropped $30 on Mulan:

Save that number, we’ll get back to it. But it’s not the only look Antenna provided. They gave some data to LightShed Partners (and then tweeted it), which compares daily sales of various PVOD releases with “purchases by day”:

This is great because we can use a few numbers to compare Trolls: World Tour sales to Mulan. Hang on to this number too. And pay attention to those steep decay curves.

7Park is another data analytics firm, though they don’t clarify where and how their data is collected. However, they have been releasing streaming data for a while now.

7 Park entered the data fray this week with a buzzy article on Yahoo, that slightly oversold the analysis. 7 Park measured, through the first 12 days of September (which covers through Saturday of Mulan’s second weekend), the percentage of users who watched Mulan among all Disney+ users during the time period measured. That italicized portion is key. Which is why Mulan could get 29% of streams during its opening weekend, but then a much smaller number when you look at Q3 to date: 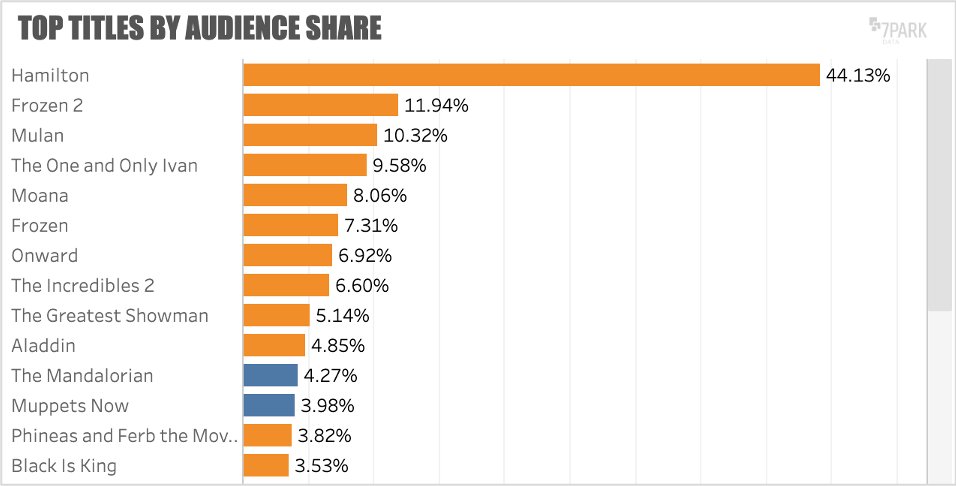 How does that 10.3% compare to Antenna and Google Trends? Favorably. As 7 Park pointed out in their thread, the demand ratio from Hamilton to Mulan matches Google Trend very well. As for their data versus Antenna, they measure different things. One compares to subscriber base while the other compares to active users. Assuming active users are between 50-75% of the total subscriber based, then the numbers tell a similar story.

Samba TV measures viewership on connected TVs specifically. Samba TV also ran an analysis on Mulan viewership, from the opening weekend, coming up with the number that 1.12 million folks purchased Mulan during the opening weekend. It’s unclear if this is connected TV’s only or if they extrapolated out to all customers. Does this match the other numbers? Yes, as we’ll see.

Sensor Tower measures application downloads. For the streaming wars, they track how often folks are installing streaming application. (Hedgeye analyst extraordinaire Andrew Freedman uses their data to forecast Netflix and Disney+ subscribers fairly well.) According to Sensor Tower, Mulan drove a week-over-week increase in downloads of 68%, which compares to 79% for Hamilton during its opening weekend. This is a bit lower than the Antenna, 7Park or Google Trends data. Sensor Tower only tracks mobile viewing, which may explain the difference.

The biggest outlier is Reelgood’s data. Reelgood is an application that helps folks find and curate their streaming offerings. Reelgood uses their data (they claim 2 million users) to then estimate demand for various titles. Here’s their chart with notably the streams as a percentage of top 20 streams.

This genuinely surprised me since customers had to purchase Mulan, which should have decreased its viewership. Instead, in a follow up, Reelgood said that Mulan actually surpassed Hamilton, which only had 9.68% of streams. This is the only source that implies that demand for Mulan was higher than Hamilton. So it’s our biggest outlier.

Just to note, of the major sources I track, Nielsen and Parrot Analytics both haven’t entered the Mulan fray. The reason is that both focus on TV series with their publicly available data. (Though Nielsen does have feature film viewership data.)

That’s the data, let’s make the comparisons. First, here is the leaked details or estimates of Trolls: World Tour’s performance.

Unlike Disney (so far), Comcast was much more willing to leak positive data about their Trolls: World Tour experiment. A few things to note, these estimates aren’t quite as steep as Antenna’s data, but match real world churn/decay better. We’ve seen this with other streaming titles where the opening weekend is about half the viewership of the first month or so of a title. And then with trolls the opening month is about half the viewership of the title lifetime to date.

This point may be interesting, but its definitely possible that about as many folks watched Trolls: World Tour after it dropped to $6 to rent then watched at $20. This chart from The-Numbers shows how popular Trolls: World Tour was even 3 months after PVOD:

WIth these numbers, we can compare purchases between Trolls: World Tour and Mulan using Antenna’s data. I did this by measuring the various peaks in the above Antenna chart with purchases by day.  Which made this chart:

Since they’re decaying at roughly the same rate, we can use this to estimate Mulan sales. In other words, I estimate that Mulan had about 61% of the sales of Trolls: World Tour on PVOD. The caveat is that Mulan is available in less places than Trolls or Scoob, meaning demand could have been as high, but without additional TVOD channels it reached less customers. But that still results in lower sales/demand.

Comparing all the Sources

Wow. So if you’re still with me, here’s my summary of everything we know. Here are the estimates I derived for purchases for the first weekend, where the data allowed me to make that estimate:

Let me explain this. Given that Antenna and 7 Park are percentages of subscribers or active users, the 15-35 million are potential ranges of Disney subscribers/users. Then I picked the number that is my current “best guess” for each. In other words, I think Disney+ has about 30 million US subscribers, and about 20 million active users in a given quarter. If you disagree, pick another input. For Samba TV, I just used their estimates. For Trolls: World Tour I multiplied the estimated 2.25 million Trolls opening weekend customers (40 million divided by $20) by 61%, the rough proportion from the chart above.

All these sources say about 1.1-1.4 million folks watched on the opening weekend. Splitting the difference, and picking the number I like best, gives me an estimate of 1.2 million.

From there, we can estimate lifetime sales. I’m using my estimate that opening weekend will generate 50% of the first month’s sales. Both Antenna and Google Trends back this up. For example, it has already seen a second weekend drop in demand of about 75% in Google Trends. Also, given this decay, I think its second month will only see about 20% more sales:

Using best case scenarios (33% viewing in the second month, 1.5 million opening weekend), I get to $135 million lifetime PVOD. Using worst case, I get to $75 million.

Phew. I’m wiped out. There are tons more issues to unpack, especially how this compares to Tenet. But I’ll do that next time.

PrevPreviousHow Fortnite vs Apple Could Impact The Streaming Wars: Imagining a “Maximalist” Scenario
NextMulan vs Tenet: I (Don’t) Declare a WinnerNext