Well, we got more Spider-Man news. He’s back at Disney! Hurray! Get ready for 2,000 words on superheroes and…

…I can’t do it. Thankfully, another conglomerate launched another streaming network. As buzzy as Spidey is, he really only moves the needle so much. Let’s talk niche streaming.

(And apologies for the slight delay. Had some data intensive articles last week so it took the weekend to digest the news.)

Right off the bat, I both love and hate this new streaming service from Food Network. Before we start, let’s summarize what I know about the company to set our terms.

– Distribution: iOS, Android and FireTV. Of the latter, it will have an “exclusive” voice partnership.

– What: A cooking app, with live cooking shows and other on-demand recipes. Eventually it will have a live call-in help service.

– Other Tidbits: You can order recipes directly from the app using Amazon Fresh, Instacart and others.

– The “pitch”: The Peloton of food

In short, I love the focus on customers and the attempt at a new experience. What I hate is that this plan relies on a few economic mistakes.

The “love” part comes from a few things. To start, having a target segment is always right, even if you eventually need to expand to all consumers. (And you do if you can’t price discriminate in content.) Does Food Network Kitchen know who their audience is? With this application it’s people who like to cook. As the streaming wars start in earnest, niche services will have a tougher time than broadly appealing service, but if you are niche, at least have a clearly defined audience. Both Food Network Kitchen and BET+, for example, do that. That’s good.

Next, while they clearly have a strong partnership with Amazon, it isn’t exclusive when it comes to distribution. (Except for “voice interactivity”.) When I first read the headlines, I thought this wasn’t the case, and honestly if your streaming service is exclusive to any device/OS, well that’s the end of your service. (Microsoft Studios is the case study here.) This new app will be distributed on all the tablets that matter (Apple and Android) and the ones that may in the future (Amazon).

What’s not to love? Well, the economics. In this case, it’s pricing models. Frankly, Netflix has set the perception of the value of a streaming video service at rock bottom. (Even as their prices have surreptitiously raised over time.) More importantly, they did this with a “library” of content that is broadly appealing. It’s still a bundle, it’s just their bundle. And that even includes cooking shows!

The inclusion of cooking shows on Netflix makes sense. No single cooking show or channel is worth it on it’s own, but they make the bundle as a whole more valuable. For years, I wasn’t watching anything on Food Network, but now I’m back on the Alton Brown Good Eats train. Would I subscribe to this service just for that by itself? Probably not, but it keeps from any bundle that doesn’t have cooking shows.

But that’s like, “Just your opinion, man”. Sure. To put this in context this, look at the landscape of recent subscriptions across a range of categories. Essentially, $5 is the new barrier to entry to get into streaming anything…

Besides Luminary–another biz model I’m skeptical on–Food Network Kitchen has the most niche, smallest library in comparison. If you’re looking at all these things that cost about the same, why would you add Food Network Kitchen, if it seems like a much worse value?  If I needed another data point, I’d point to the subscription fees.

According to Dan Rayburn’s website, Food Network is a $1.75 proposition right now. On say 80 million households. If you quadruple the price, you need the audience to only decay to 25% (20 million people). Worse, what if the $7 launch price needs to go up to truly sustain the model? It only makes it harder to justify the economics.

The counter is that this is the “premium add-on” to the Food Network experience that the truly devoted fans will sign up for. This is a compelling case; it’s a way to partially “price discriminate” for Food Network viewers. Regular fans will watch Food Network on cable or vMVPD. For the hardcore fans, they can get a ton of new content. The challenge is defining “hardcore”. If hardcore is 1% of your audience–and Food Network reaches 90 million poeple, but doesn’t have nearly that many watching–than that’s not a lot of people.

Maybe I’m looking at this all wrong. Trust me, at this point I can hear those of you touting a hidden business model:

I’ve written on this twice before, the entertainment press and commentariat tends to drastically overstate the value of licensed merchandise. (Here and here.) First, the actual revenue a studio/network partner makes is pretty small. It’s about 5% of the total revenue of a product. If you hear projections of a firm doing $1 billion in total licensed merchandise sales, they only get $50 million of that. Which is great! And what Star Wars, Marvel and Mickey Mouse do. But is Food Network Kitchen going to generate $1 billion in total retail sales to get $50 million to run everything?

I’d call licensed merchandise the world’s narrowest content funnel. Especially for adults. Even more for household goods. Frankly, for all the Game of Thrones fans, only a few ever plopped down their credit card and bought things. Honestly, it’s probably 2-10% of fans. Say those numbers apply to Food Network Kitchen: 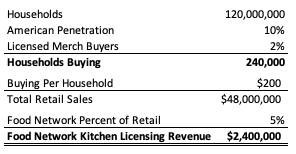 That’s what I mean when I say that licensed revenue is overvalued. $2.4 million extra revenue doesn’t make a streaming service. And tweak the numbers however you want…it’s hard to really drive revenue with licensed merchandise without a huge hit.

Let’s finish with the Peloton analogy which kicked off this entire thing. Peloton had a bad first week on the stock market. I have a simple theory for why Peloton, Uber, food delivery services and scooters–and lots of other flashy new companies–are overvalued. They start entering markets at the top of the value chain. Starting in New York, San Francisco and Los Angeles, they target upper 1% professionals who can pay premiums for convenience. Which is fine; you can make a living as a business doing that.

However, when you build a “total addressable market” that assumes you’ll eventually reach EVERY American, well your valuation crumbles. Folks making $40,000 a year can’t pay $20 for someone to deliver groceries for them. (Or buy $2,000 bikes, then a subscription.) Speaking of Peloton and bad IPOs…

Companies that lose lots of money have had a bit of a tough time going public recently. With Peloton not “popping” on its market debut to WeWork/The We Company having to fire its CEO and delay it’s IPO. Will this have ramifications for the entertainment industry? Well….

I debated making this the biggest story of the week. It could really change the power dynamics in Hollywood. Fortunately last week’s issue of the Ankler, which is much easier to link to now that it’s on Substack, has you covered. Essentially,  WME didn’t have a tremendous growth plan. Sure, WME has access to lots of talent, as Rushfield points out, but that’s hard to defend, costly to maintain and doesn’t really scale.

The question is what happens now, especially with the debt they’ve loaded up. They’re in a fight with the WGA for their most valuable revenue stream–package fees nee profit participation–and they have debt payments coming up. Could this end up being the biggest story of the week? Easily, at which point we’ll definitely be writing about it more.

The Rise of Kevin Feige

It’s no secret I think that Feige is the top development executive in town. Previously, John Lasseter and Les Moonves joined him on that list, but they’ve been booted out of town. Well, one has. The dual news of Feige getting to make one more Spider-Man film and a new Star Wars film shows his budding influence on the Disney film slate. He’s the biggest free agent in film if he ever chooses to leave Disney.

The news is Apple is planning theatrical runs for its films. If I wrote headlines at the trades, mine would be, “Apple chooses to maximize the value of its assets”. Theater-going doesn’t cannibalize streaming and it helps raise the average price per customer. Of course, if you make unpopular films that you overpay to get the rights for, then it will have worse PR impacts if the movies don’t launch. Which is what happened to Amazon; they can afford to lose money; they can’t afford bad PR.

(More to say on this topic this month.)

Data of the Week – Mario Kart Launch – HT The Brew

Mario launched a new video game–news I saw hat tip to The Brew–but he launched it huge. My only point here really is that for all we complain about the proliferation of IP, it’s hard not to look at this and see why we keep coming back to it. 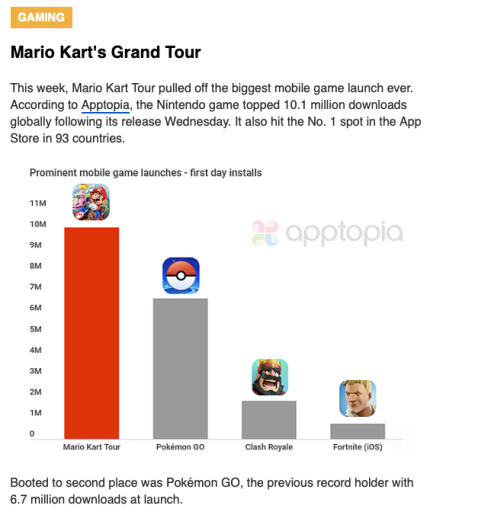 Jon Wilner broke news that the Pac-12 will not bring on a purely financial–meaning PE firm–for a partner in the Pac-12. That’s a smart decision, though we’ll wait for next week to hear the specifics. (And for a fun article on this by me on another website.)

Meanwhile, Sinclair is headed to the brink with DIRECTV and Dish Network dropped Fox and affiliated “NuFox” channels. If you work in sports, they do seem to be the repeated driver of carriage disputes.

The Rain in Spain is Streaming

I’m considering dropping all “streaming wars” coverage in the United States to focus on Spain. As I wrote a few weeks back, Spain is a great case study in how local production companies, studios, telcos and streamers will take on Netflix and Amazon. Here’s the latest entry in how Movistar in Spain has grown recently from Variety.

And in any given week, a few stories make a lot of noise, but if you trust me, they won’t have a huge impact on the business of entertainment.

Lots of awards were given out and ratings were down. The most obvious explanation for declining ratings? Less popular shows. Sigh. But I will say: You can see why Amazon and Netflix spend so heavily by looking at how many people discovered Fleabag literally over the weekend: 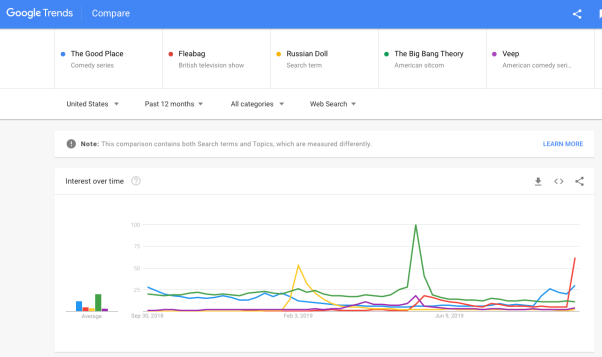 Maybe that makes spending $50 million in marketing just for TV awards worth it, or maybe just spend that marketing the shows?

JLo and Shakira Will Perform at the Super Bowl

Okay. Don’t they have performers every year? Meanwhile, I don’t understand the narrative that this somehow shows the power of Jay-Z, specifically.

Jeffrey Hirsch Takes Over at Starz

Well, officially takes the President role. Again, any individual executive movement doesn’t move the needle for me, but it does remind you that Starz/Lionsagte are still out there. Just waiting.