This week, The Starters (an NBA talk show and wildly popular podcast) was cancelled by…well we don’t know who. The Washington Post identified a few potential suspects. It could have been Turner or NBA TV–for the usual ratings reasons–or it could have been their corporate overlord, AT&T, mandating cuts across all businesses to pay off debt. (For a good read on how influential The Starters are, Business Insider has the story.)

Just because I’m a huge fan of these guys doesn’t mean this is the most important story of the week. But it does remind us that AT&T may still have no idea how to build brands in the streaming wars. You’re trying to launch a platform…which needs to acquire a lot of new subscribers…and you’re cancelling a cheap show with a devoted fan base that amplifies it on social media? Gotcha.

In another sense, it’s just a small ramification among all the huge ramifications of AT&T/Time-Warner merger had on entertainment. Which was approved a year ago this week by one (unelected) judge (legislating from the bench). (That’s me being slightly cheeky on politics.) Let’s reflect on that massive story with a bit of distance, focusing on the true consequences of that merger.

Most Important – AT&T and Time-Warner Merger and the Ramifications

Let’s be clear on the official, Entertainment Strategy Guy take, on this issue: the decision to allow these two companies to merge was huge. It was big. Not unprecedented, but big. (I mean, Comcast and NBC-Universal was unprecedented, though Comcast had tried to buy Disney in the early 2000s.) Though the impact it had on future mergers was much smaller than anticipated, as I’ve written a ton on.

This is one of those instances where you just have to marvel at what happened. As soon as the dust settled, Comcast genuinely saw a greenlight to grow. So Comcast put in an offer on 21st Century Fox that eventually forced Disney to increase their bid to $71.3 billion, an increase of about $20 billion dollars.

This boost likely turned the deal from a no-brainer win for Disney to an open question. The economics lesson is the “winner’s curse” in auctions. Meaning, if the value of something is an unknown future value of X, but each bidder has a different value on that X, the more bids you accept, the more likely someone is to overpay to win the auction. Did Disney have to overpay to win the deal?

Maybe. At $50 billion, I think they make up the value even if they don’t launch a game-changing streaming platform.  At $70.3 billion? Well, that’s $20 billion in free cash flow–discounted over time–that you need to add. That’s a tougher sell. Even if Hulu allows them to launch a transformational subscription service, they still could have done a version of that without Fox. But the raising in price made Disney worried about debt. So…

Second, after it raised the price on Disney, Comcast bought Sky.

Bundle this with “another merger that was in process that Comcast hopped in on”. Fox was looking to expand its stake in Sky, and Disney was hoping keep Sky in the deal. Then Comcast came in still looking to buy something. Without the AT&T verdict that caused Disney to increase its asking price, this deal doesn’t go through.

Though, after swallowing this additional piece Comcast now has enough debt that it can’t do anything else. I mean, it had to spend another 26 billion pounds to buy Sky. And as has been written, the debt loads of all of entertainment conglomerates are now so heavy that this has weighed down future M&A. Of course, not for AT&T exactly…

As the dust settled from the merger, conveniently AT&T bought out the rest of its stake in Otter Media–a collection of OTT brands–from The Chernin Group. Arguably, Otter was really valuable to AT&T since it has subscription video know-how and brands to throw together with Warner Media. And now that the heads of Otter Media are in charge of all the streaming video, well that little move mattered. That didn’t stop AT&T, though, from cleaning house…

I applauded these decisions at the time for a larger corporate behemoth, though few customers loved it. In my mind, this strategic decision made sense because as I counted up once, AT&T had over 20 streaming services and was planning to launch more, including DC Universe. So between DirecTV-Now, HBO Now, and everything from Otter Media, well AT&T needed some focus. Maybe they will have that…

Now that you have all this content in one place, AT&T’s master plan was unveiled to launch its own Disney+/Netflix style streaming service. Since then, the price and the content and the number of tiers and the launch date and the distribution plan have all been up in the air. Or have changed multiple times. And whether or not it shuts down more OTT services or bundles them together.

Does Richard Plepler leave HBO if AT&T doesn’t buy Warner-Media? Probably not. What about David Levy? Does Bob Greenblatt come in? Likely no to both.

So AT&T’s acquisition started a parade of executives that has only continued, with more HBO executives and then the head of Warner Bros. (Fine, that last one probably would have happened anyways.) Some executives will always leave after a merger; all of the top executive team, though? That seems like too much.

Add this all up: How big was this?

Huge. Monumental in the industry, and some of the ramifications are yet to come.

(This very long read from Nilay Patel at The Verge is still worth reading even a year later.)

Other Candidates For Most important Story of the Week

Lionsgate Does a Library Output Deal with Hulu AND FX

This is the type of synergy we were looking for when Disney swallowed the Fox. As a deal, it finely threads the needle in keeping value in the traditional linear channels, while also helping boost the streaming platform. Of course, the juiciest number–the dollar value–still hasn’t been revealed. (Meanwhile, you also have to wonder how valuable the Lionsgate catalogue will be, coming in as the sixth or seventh best studio recently in box office terms and this doesn’t even include the John Wick films…)

I didn’t realize that HBO didn’t make Chernobyl. Better said, they did but it was a co-production with Comcast-owned Sky did. (I explain the importance of that distinction here.) As I wrote in my Game of Thrones series, Sky distributes HBO content in the UK. So this sort of cross investment makes sense. At least it did before last year’s acquisition of Sky by Comcast. If HBO threatens to pull content from Sky–as Disney is currently debating and likely going to do–Comcast/Sky will need to invest in itself. And news reports say that Sky is doubling its planned content output, increasing it by over $1 billion.

M&A Update – Barnes and Noble is getting purchased…but by whom?

I’m worried I’ll brand myself a complete Luddite with this fact about myself, but I only buy books in person. Like in real life. I don’t ship them to my house via Amazon.

Why not? Personal finance reasons. It’s so easy to buy books online, I’m tempted to buy a bunch that I won’t read. Instead, I have to do it in person, and that extra barrier limits how many I buy. (I also read an old book for every new one purchased.)

Books are clearly a huge part of entertainment, but I neglect the category in my overall coverage because the news is less and it isn’t quite as sexy as TV or movies. The story this week is that Barnes and Noble had accepted an offer from Elliott Management to get purchased, then some shareholders protested the price was too low, and now Readerlink (a book distributor) has put in a higher offer. We’ll see what happens, but I’m fingers crossed for another good bookseller because I think markets work better with more competitors in them.

(By the way, I have a Twitter poll up on competition. Answer the poll on cellular phone companies (and competition) here.)

I told you not to get too excited, didn’t I? Now the attorneys general for ten states have sued under the relatively uncontroversial opinion that three companies will have higher prices than four. Until this thing ends, it’s a lot of news without a lot of news. (Again, vote on my poll here about cell phone companies.)

The article “Uber’s Path of Destruction” in the journal American Affairs (hat tip to the California Sun newsletter for finding) was single handedly responsible for delaying the start to my Wednesday morning. It inspired so many thoughts I need to do a second read to capture the potential ideas from exploring what are true network effects versus size advantages to the role of ignoring regulations to how inflated valuations can act as a subsidy fueling market capture in pursuit of monopolies.

The most applicable idea, though, is thinking about the similarities and differences between Uber and Netflix. (Obligatory weekly Netflix reference achieved.) On the difference hand, Netflix has zero marginal costs for additional viewing–meaning if ten people watch a movie or 80 million, the costs don’t accrete for Netflix–which is the goal with digital platforms for explosive growth (think Facebook and Google). Uber does NOT have this sort of cost profile, which is often ignored in hyperbolic media coverage.

On the similarity hand, I worry that Uber and Netflix have overstated their network effects. Uber thought they would have “network effects”, and they have some in individual locations,, but these haven’t actually born out at a national level. It turns out customers can switch apps fairly easily and so can drivers. I wonder if this applies to Netflix too; they’ll certainly have advantages from having more customers and the ability to amortize costs, but the data network effects may be overstated. And they aren’t nearly as powerful as Facebook’s social network.

No matter what you think, take a read for a deep dive into Uber’s history and economics.

My recommendation for a podcast listen this week is TV’s Top Five from the THR TV team. It’s a good read, but for business-specific content (which is what I’m on the lookout for), listen to item 3, their coverage of the new BET streaming service. In particular, they point out the difference between working with a creator like Tyler Perry (which the new platform will) versus having all his content (which the new platform won’t). Perry’s TV series, for example, are currently owned by Discovery. (So another reason for Viacom to buy Discovery, after it buys CBS!)

(Honorable mention: Last week’s The Business was particularly good too, with a good discussion of Fox’s victory over Netflix on executive poaching.) 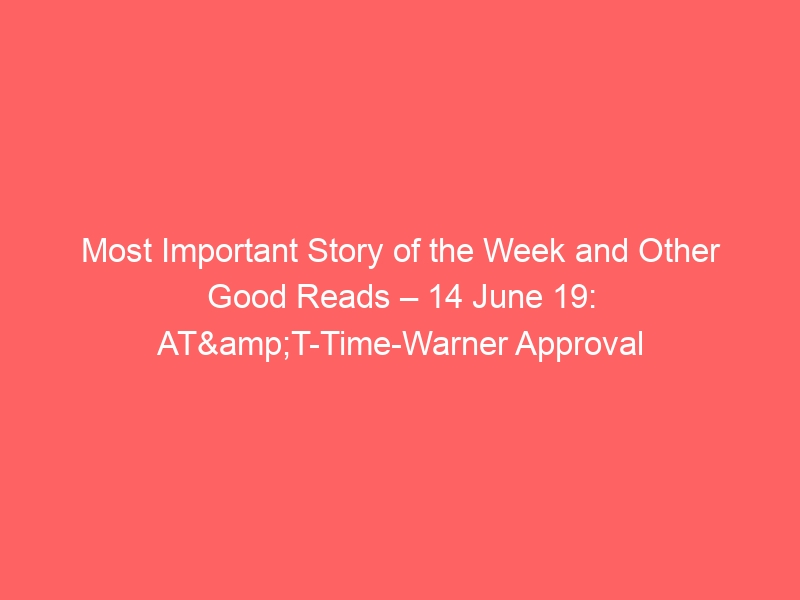