The streaming wheel keeps spinning. More and more companies want to join the future of entertainment and release their shows on-demand. Yet, what intrigued me most was one of those massive conglomerates not announcing new businesses, but shuttering old ones.

Most Important Story of the Week – WarnerMedia shut down FilmStruck

(Punctuation aside: in the age of digital websites, I never know if names of companies are one word or two. According to Wikipedia, both of these companies are joined words.)

As I mentioned in my article on the very vague announcement by AT&T/Warner Media, this generally augurs a smarter strategy by AT&T/Warner Media (a name I hate typing because it doesn’t make sense). Here’s the list of at least 13 streaming services currently run or planning to launch by the conglomerate: WarnerTBD, DirecTVNow, HBONow, Boomerang, DCU Streaming Something, Machinima, Uninterrupted, VRV, Stage 13, Ellen Digital Ventures, CrunchyRoll, FullScreen, Rooster Teeth and I’m sure there are more. And get this: Turner (with CNN, TNT, TBS and the NBA channel) has its own set of digital initiatives.

Now that they’re together under one roof, they’re consolidating. This is natural; as part of a “micro-target” strategy, though, if something doesn’t work you need to pull the plug. Closing down the least successful options should make sense if they weren’t profitable–but as long as the next step also makes sense: which is continuing to consolidate all the brands under one roof. There are two really compelling reasons to do this. First, recreating the bundle is ultimately what customers want. Sure, you may not like the idea of paying for ESPN if you don’t watch sports, but many viewers don’t want to pay for your Bravo or Syfy or History Channel fix either. The bundle ultimately spreads the wealth; everyone suffers and wins together.

More importantly, Netflix set that expectation for consumers. When I’ve spoken with legacy media companies, they’ve always insisted that they just can’t lose money the way Netflix does. Fair enough, but customers expect a product like that. Charging $3 a month for access to only cartoons or only DC, when Netflix charges just $11 for both superheroes and cartoons and sitcoms, well what would you rather buy? You may not like that Netflix has set unrealistic expectations, but there you have it.

2019 will be fun to see how these different strategies finally collide.

Side Note: Really DramaFever is closed? This is one of those companies that two years ago seemed like the “hot new thing”. But like many things that are reported in the growth phase and ignored in the death phase, seems to not quite have matched the hype of its initial growth.

Side side note: Just because Netflix and Amazon Prime/Video/Studios have a “big tent” approaches doesn’t mean that they aren’t losing the equivalent amount of money on their international programming. Essentially, snapping up a bunch of international originals from Japan to Korea to Latin America–which both have done–is the same thing as launching your own channel, you just cover the costs in the upfront fee. The key becomes “allocation”. How much of an original productions costs are allocated to the US, UK, EU and other foreign territories versus the country of origin? If it’s a lot–and from Netflix and Amazon’s statements this seems to be true–and no one tunes in, well you’re losing money on those bets, even if shareholders can’t see those losses. But if they are over-indexing in viewers globally, they could be making money. At the end of the day we don’t know enough to say, but it is a risk.

Context Update – WeWork is Too Big To Fail…Who Else is?

This is a new feature for me: the context update. I’ve been seeing a lot of general economic stories that had me thinking. Stories about a possible recession, about a possible stock market crash, and about the debt markets. Just last week, I had an update on how the election could impact regulation of media & entertainment. So in addition to strategic moves, it felt right to regularly make room from “context” updates, stories I want to call out because I think they could change the context in which we conduct the business of entertainment.

This week I loved the article by Dealbook’s Andrew Ross Sorkin about how WeWork continues to get investments, even as losses grow. Sorkin makes an interesting case, though, about how it may not matter that it loses money:

“But a funny thing happened as WeWork has scaled up all over the globe: It may have become too big to fail. WeWork has gobbled up leases for so much space in so many cities, there’s a compelling case to be made that its landlords wouldn’t be able to afford for it to go under… WeWork reported that it lost $1.22 billion through the first nine months of the year — but the company also said an additional $3 billion investment from SoftBank had pushed its valuation to at least $42 billion.

So this inspired the fun question: who is too big to fail in Hollywood?

Probably no one, if I’m being honest. In Los Angeles and New York, the geographies, probably Uber/Lyft. If they go under, that would drag a lot of temporary workers down with them. But it doesn’t seem like any singular entertainment entity is too large to destroy the economy. Except maybe…

Netflix doesn’t have the largest content spend, but it has the largest amount of new money. And if something happened to Netflix, likely its rivals would pull back on spending they don’t need. And since the highest bidder disappeared, prices all over town would go down. Would California and America let them? Probably, again they aren’t that big.

Why pick on Netflix? Well, as I noted last week, whenever the market sneezes, Netflix catches the cold. All the tech stocks seem particularly correlated with moves in the market–if it goes up, they fly even higher; if it goes down, the plunge too. Netflix and Amazon, in particular, also have extremely high multiples of stock price to earnings or free cash flow. In other words, their stocks are the highest compared to the underlying financials. Further, with Netflix having a huge amount of junk bond debt–now at $10 billion–they’re vulnerable to interest rate increases or a credit market freeze. If you haven’t made a profit, well down times can be rough.

But don’t worry, we’ll be fine.

It’s been almost six months since we learned that a government law suit wouldn’t stop the AT&T/Time-Warner deal. With the impending wave of mergers & acquisitions–I’m kidding, I was always skeptical about it–I started this update section to keep us abreast of all the steady steam of deals surely headed our way.

But that doesn’t mean we don’t have some M&A news, more specifically, antitrust news! Donald Trump–inspired by a lawsuit filed by smaller cable companies–called out Comcast-NBCU for potential antitrust behavior. (Yes, he called them out on Twitter.)

What do we make of this? If we believe our previous narrative, that Trump is only stopped the merger with AT&T/Warner Bros. because he hates CNN, well Comcast owns NBS News and MSNBC, both of which Trump calls fake news.

On the other hand, this does show more consistency in pushing back against distributors who also own content producers. Right now this is firmly a “pipes”–telecoms, cable, satellites–versus “platforms/content” battle. But could it extend to Netflix, who is a crucial platform that buys and makes its own content? Or what about virtual MVPDs like Amazon or Hulu or Youtube? Would they come under scrutiny? I doubt it, but you never know. I doubt President Trump has that sort of focus or energy. And this probably is just personal.

But if it isn’t, well, maybe the tsunami of M&A never will arrive.

Okay, this isn’t big data, but one company pulling back on data. Apple announced in its last earnings report that it will stop releasing sales numbers for iPhones. This is bad for traders and investors, but largely good for Apple. Asymmetric information is an advantage for those people who have the numbers. I wish as investors and observers we could have more data, but there is likely little we can do here.

Lots of News with No News: Netflix and the “new” Theatrical Window

Finally, I’m with most of the crowd that Netflix largely oversold the importance of giving Roma a limited theatrical run. This isn’t really a game changing move on their part, but like all things PR, they won the messaging war. They’re still leaving money on the table by not putting films in theaters, but this way they can hide the data while technically satisfying the Academy. Overall, really not a major story. 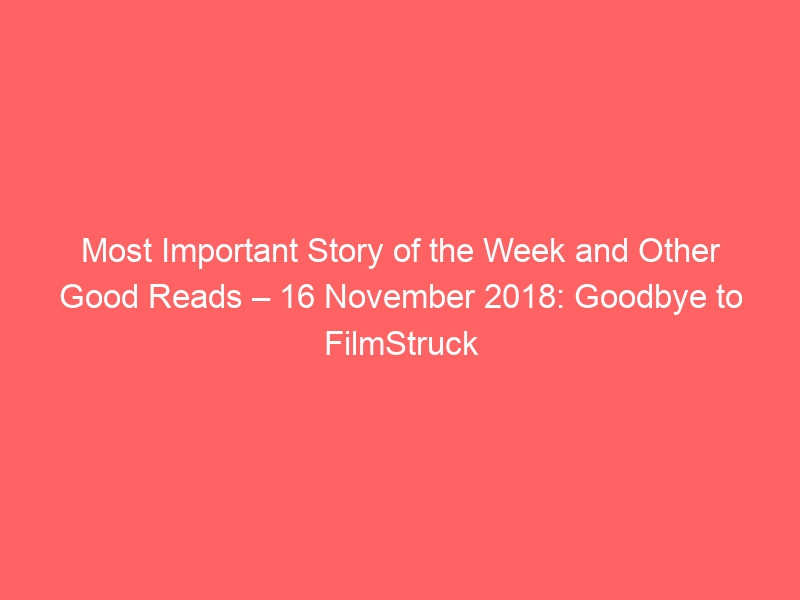 PrevPreviousHow Could the Elections Impact Hollywood?
NextHere Comes the RetailersNext