Other Lessons from MoviePass’s Demise

Often, when I write a long article, I have extra thoughts. MoviePass—and its demise—may be my “story of the decade”, when judging off the “hype-to-cash flow” metric. (Remember when I used it to explain subscriptions? Or logarithmic distribution of returns?) Recently, I wrote about the lessons of MoviePass’s demise at TVRev (here for Part I or here for Part II).

Today’s article is is basically the “director’s commentary” of that guest article. Whenever I write a long article, invariably I have a ton of extra ideas. For example, in my first draft, I tried to find historical examples of companies that made my same mistakes. (What is old is new again, or just digital now.) I found some, but couldn’t find others—and I was already long—so I cut that idea from the initial article.

So what to do with all those extra pieces? Well, put them on my website! Enjoy more thoughts on MoviePass. Today is all about “additional lessons” to be learned from the fall of the mighty ticketing giant. These lessons weren’t as great as the initial four in my TVRev piece, but I still wanted to make them. Especially the first problem, which I see happening a lot.

Lesson 5: Beware of upper 10% companies pitching themselves to the masses.

This is one of the underrated stories in business right now. You know who the business press doesn’t talk to a lot? Poor people. Sure, the political press ventures to Middle America to find Trump voters, and can’t help but write stories about the Dollar Store, but overall, most technology writers talk to software engineers or product managers or venture capitalists or lawyers or biz dev folks who are really, really well off. They don’t do a lot of interviews with the contract workers who are cleaning offices or serving meals or working in retail. (Unless it is an expose. But they don’t usually ask about their thoughts on the newest VC round.)

There is a gap in lifestyles between the top 10% and the bottom 80%, especially the bottom 50% and the top 5%. MoviePass started as a top 10% company. If you’re an intern at a TV publication and your parents pay your rent, then yeah adding a $10 MoviePass subscription is no big deal. That doesn’t apply to a family eking by to pay rent every month. So MoviePass felt like an upper 10% product to me.

Who else does this apply to?

Not to pick on scooters again—as I did in my TVRev article—but they are a classic top 10% company. A lot of the initial hype around scooters billed them as a way to radically transform urban transformation. And suburban too! This never quite made sense to me, from a mass transit standpoint. If you can barely afford a car to get to work, can you afford a scooter ride?

Let’s do that math. Say you add a scooter to your daily commute. And it is $3 round trip per day (Which may be low, depending on the commute. This also means you live very close to work or to a bus stop, which I didn’t add to the costs.). Well, at the end of two years—assuming you found a scooter every day and never crashed—you’d have paid $1,440 to Bird or Lime or Uber.

Of course, you could have bought a scooter online for…$300.

Scooter rides aren’t replacing commuting (and the math on Uber is the same). Instead, my theory is that ridesharing and scooters are additional expenses to people’s lives. The majority of users—in Los Angeles at least—ride in Ubers or Lyft for convenience: Uber replaces one person in a group staying sober enough to drive when going to a concert or dinner. Any of the stories of people who gave up commuting for Ubers are invariably about wealthy business folks (definitely in the upper 10%).

Why do we get this so wrong? Because the early adopters are rich. At least upper 10%, but in some cases upper one-percenters. Given that they have the extra cash to pay for the convenience, they do it. And they assume this applies to everyone, even those scraping along at the bottom for pennies. This seems to be a feature of 2010 tech companies: they pitch themselves as cost saving, but are usually about adding convenience.

Uber/Lyft – Pay to avoid having to drive home from bars.

Amazon Prime – Pay to avoid having to drive to store.

The Grub Hub rise is the most fascinating one to me too. I mean, delivery from Thai or Chinese or pizza restaurants used to be free! Now we’re paying 10% on top? (In fairness, this convenience, can be value creating, it if boosts willingness to pay.)

The new wave of “bring it to you” from massages to house cleaning to car washes are just variations on the above principle: you used to drive to get it, now it comes to you, for a fee. Which doesn’t mean the companies above are doomed, but if the growth rate for a company—and hence its valuation—is built on 100% market penetration, ask if that is even financially feasible for lower income Americans.

Lesson 6: Beware who you sell your company to.

If MoviePass had been acquired by Amazon, wouldn’t it still be in business? Amazon would hide its revenue losses in some anonymous sub-category of its earnings—or add it as a benefit to Prime—and we’d have no idea what is happening. ($240 million a quarter? Piece of cake for Amazon.) Of course, I don’t mean to imply that Amazon has lost lots of money on other businesses it has acquired or built. But we don’t know, do we?

You can’t explain the demise of MoviePass without acknowledging that it got bought by the wrong company. It was acquired by Helios Matheson, a data company that couldn’t handle exorbitant losses month and after month. It could lose some millions as long as it stayed buzzy and that floated the stock price. But a not-Fortune 500 data company can’t handle losing tens of millions every month like an Amazon or a Netflix.

Some companies just feel shady to me. Some hallmarks for me are…

Hastily designed websites. Honestly, do you trust a company who looks like they are working on HTML 2.0?

Dozens of subscription options. Why so many? Where is the catch?

Or promotional pricing. Is it really 40% off today only? What is in the fine print?

Let’s start with promotional pricing. It seems like a few successful companies keep prices extremely steady. Apple has the same price for phones until a new one comes out. Walmart has everyday low prices. Netflix only raises prices once every two years or so. You could call these the “steady Eddies” of pricing.

The other side is the “variable Carols”. JC Penney and Macys lured in shoppers with tremendous deals. It’s part of their appeal, and now Amazon is better than them at it. DirecTV Now is switching prices every other month to lure in customers cable company-style. The trouble is, once you start monkeying around with prices, it can be really hard to stop. And customers will just wait for the next price discount.

On to website design. UX—user experience, if you don’t know—or better said, bad UX can be a huge red flag. Especially, UX designed to keep people from cancelling. And shout out to Justin Charity and Katie Knibbs at the Ringer from bringing this to my attention. Apparently MoviePass had a fairly bad UX when it came to trying to cancel on their website. This was a warning that a company is more focused on value capture than creation. The Ringer folks flagged CBS All-Access as being tough to cancel. (The worst is two or more screens asking, “Are you sure you want to cancel?” and/or moving the “I’m sure” button around between those screens.)

Who does this apply to?

Sinemia. Basically, Sinemia seems like the modern day equivalent of a CD subscription company. I put out how bad their model was on Twitter, once, and and someone said, “Well, clearly they disagree that they can make money.” Well, I do think Sinemia can make money. The key is tricking enough customers to sign up to capture that value. It won’t actually be adding anything to customers or become a sustainable company. But you can make some money tricking enough customers to sign up.

Lesson 8: Beware of companies that start their own movie studios

Why did MoviePass start buying movies? Like Gotti? What in their plan said, “Hey, we can now pick movies?”

I’m always skeptical of tech companies starting “original content” divisions, but this felt like madness. (And everyone has original content, and all will be great at it.) 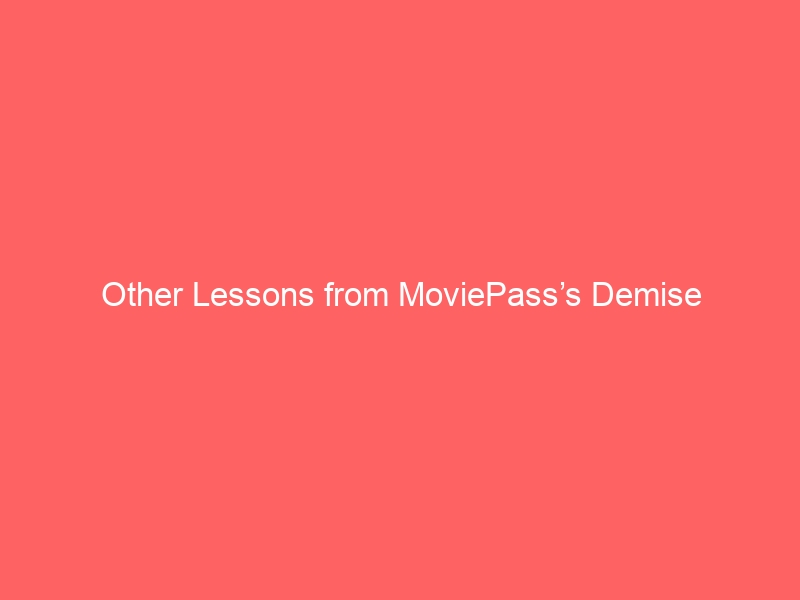