If other writers are like me, when you write a lot on something, well a lot of great little tidbits and nuggets just don’t fit in. The thoughts are interesting, but will ultimately disrupt the flow of the article or series of articles. The joy of having my own site is I don’t have to junk those ideas like a Universal exec junking another monsters franchise.

For instance, last July I dug pretty deep into the M&A (mergers & acquisitions) landscape as it relates to media, entertainment and all communications (that’s my term for the pipes, both real, spectral and bundled) that deliver it. I’ve long been fascinated by M&A, doing some in my career, but this gave me the chance to study the trends at a higher level. So I devoted most of July to this topic.

But a lot of thoughts didn’t fit into my initial piece. Consider this the DVD commentary/directors edition of that post along with a slight update into M&A in entertainment, media and communications since the huge surge of 2018. Did the pace continue? Has the consolidation worked? And how has the media covered it?

What does this mean? It means that with fuzzy definitions, small sample size and exponential effects, you can make M&A data do lots of things.

Let’s pause on that last sentence. Another way to say that is my least favorite quote of all time, “There are three types of lies: lies, damned lies, and statistics.” This implies all of statistics is a lie. And what I’m about to show is how you go about doing that: taking small sample size, selective dating and fuzzy definitions to weave a narrative.

But the word “narrative” is the key to that last sentence. The quote should be “lies, damned lies and narratives”. Narratives are created by weaving together anecdotes and reasoning from first principles, sometimes using statistics as your anecdotes. Good data analysis is the antidote to bad narratives. The problem is that data analysis is hard to do and takes lots of time.

But maybe if I show you how messy this data set is, the next time The Hollywood Reporter or The New York Times does an M&A article, you can see how they may be selectively pulling data to sell a narrative.

In fact, let’s use the New York Times and Bloomberg to show this. A lot of the inspiration for this series came from the Times June 2018 article showing how huge M&A was in 2018 through the first six months, and expectations it would continue at that frantic pace. Here is they key image from The New York Times: 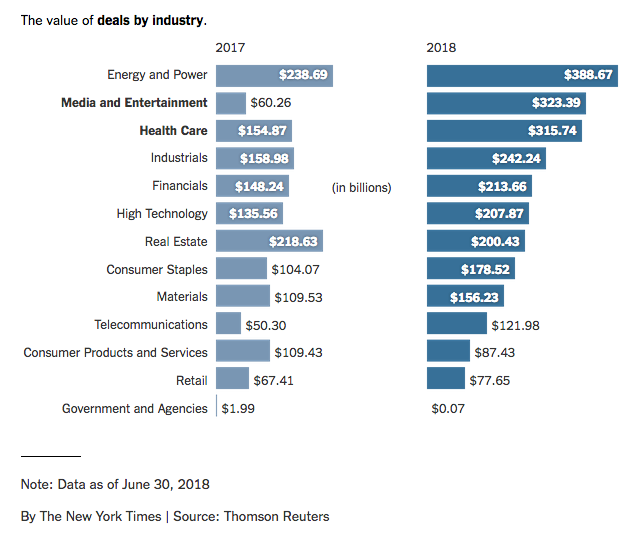 Yikes. So M&A in the first half of 2018 was five times the amount of all of 2017. That’s a 5X jump. A jump that big is clearly the signal through the noise in this small sample size data set. So presumably, if Bloomberg wrote a similar article on media & entertainment M&A, we’d see similar results. And here we have that: 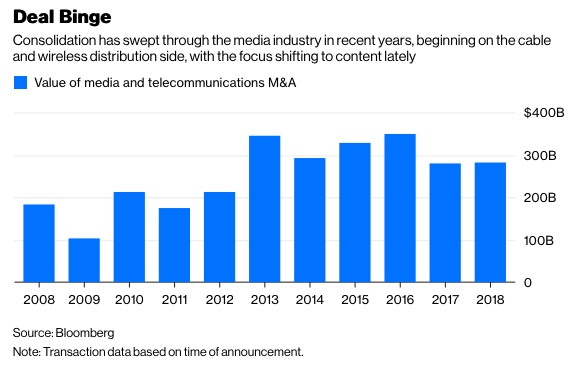 Frankly, it is hard to reconcile these numbers. The New York Times divides up telecommunications and media & entertainment, while Bloomberg combines them. But it doesn’t matter because the numbers are way off either way. How could Thomson Reuters data be off from Bloomberg’s data by three times in 2017?

I could make this story even crazier. Here’s an article from Variety from October of 2018, and it uses Thomson Reuter’s information, and it doesn’t even match the New York Times numbers. Then they give PwC’s numbers, which don’t match either set:

Sometimes M&A doesn’t even match at the same paper. Take the Hollywood Reporter. Doing research for my series in July, I found two different charts from articles less than a year apart, one from March 2016 and one from January 2017. Even they don’t match. 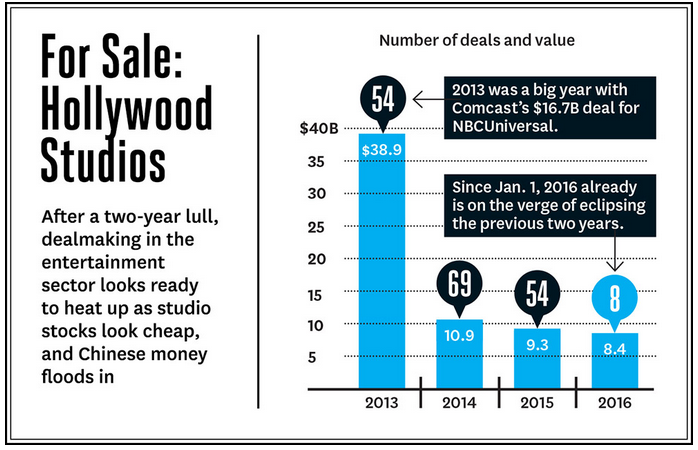 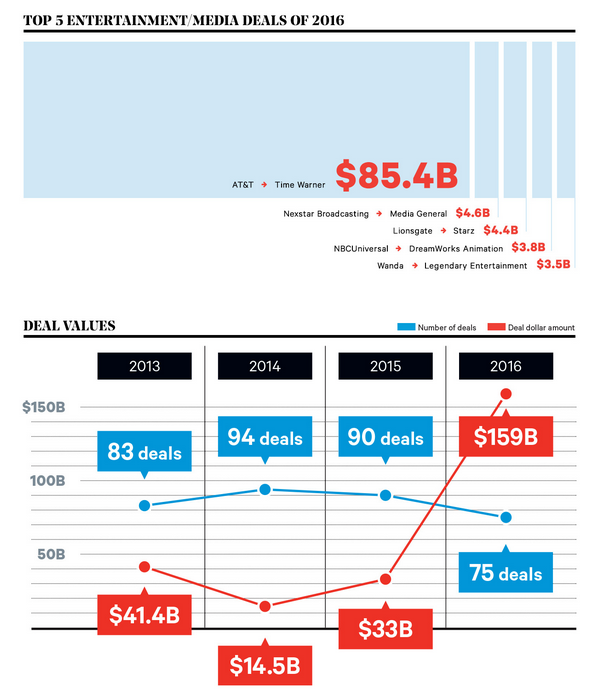 The point is M&A data is messy, as I wrote way back in July.  By choosing either when a deal closed or was announced or what counts as “entertainment” you can draw very different conclusions. It’s confusing enough that I want to do a quick explainer on it.

Think of these as the variables that go into an “M&A deal” and the easiest ways to manipulate the data to draw out a narrative.

Disney announced a merger with 21st Century Fox in December of 2017. It will likely close by June of 2019. AT&T announced their merger with Time Warner in October 2016, and it closed in July last year. Sprint & T-Mobile announced a deal in April of last year and it is still ongoing. My recommendation? Test your on M&A with both closing and announcement dates. If your thesis about M&A changes, then it is likely a weak thesis. And if the article you are reading doesn’t clarify what it is citing, announcement or closing, it is probably a weak thesis.

Early 2018 was no doubt good for M&A. A lot of it happened. By any metric. But if you combined the back half of 2017 with the first half of 2018, it could look even bigger. (By adding the Disney deal.) The thing is, years are a human creation. If you move your measurement period back a few weeks and that would change your results, well, then your thesis about timing is, again, weak. So consider rolling averages, shorter and longer time periods and multiple measurements. If your thesis—and a narrative is just an unquantified thesis—doesn’t hold, then toss it out.

Are you including cable companies in your M&A analysis? Tech companies? Or just film and TV studios? Again, a handful of deals in one or two of the areas could make that are seem much higher or lower. Broadcast stations and cable companies spent a lot of the 2000s merging, and that’s leveled off. A lot of those deals were pretty small, meaning they had high numbers of deals, but didn’t effect total deal size. Moreover, depending how you define media & entertainment, you may not have noticed. (Is a broadcast station a telecommunication or media company?) Whenever you read an article on M&A, make sure they explain what type of companies they are including and which they are excluding. (And know that they more you exclude, the smaller your sample size.)

To do a simple example, Viacom bought AwesomenessTV for something like $50 million dollars, and that’s 1,400 times smaller than the Disney/Fox merger. Since deals can be orders of magnitude different, measuring the size of deals versus the pace of deals is complicated, and can often support competing narratives. Again, I like checking both ways, or grouping deals by size.

Kevin Drum last year critiqued the aforementioned New York Times article on the “frothy” M&A environment for their headline that 2018 was the biggest ever year in mergers. His constant refrain—which I try to echo—is to always put things into inflation adjusted terms. (In the entertainment business, the most glaring example of this is not adjusting box office for growth in ticket prices. Just silly.) Go to Mother Jones to see Drum adjust the merger numbers by inflation.

To be clear, I did not do this back in July, and I probably should have. Maybe I will in the future. Drum is right that the banner declaration of the “biggest year of M&A” doesn’t hold up when factoring in inflation. Also, I love this chart because it shows just how frothy everything was back in 2007, right before it all came crashing down.

I mentioned back in December that the mood of M&A may have been dimming. Specifically, Alex Sherman at CNBC had an article explaining why M&A in 2019 likely wouldn’t match 2018. Since then I’ve seen this narrative in other places as well, including Tara Lachappelle, Julia Boorstin and Deadline (twice). The general thrust of the argument is that so much M&A is slowing the appetite for mergers. (With some doses of economic uncertainty.)

Of course, there is the opposite narrative that is just as prevalent. Both “year in 2019 predictions” in The Hollywood Reporter and Variety forecast big M&A (both involving a tech giant swooping in on a movie studio conglomerate). The Variety article I cited above was predicting continued M&A dealmaking, but that was right before the mini-bear market in Q4.

Still, despite the competing narratives, the fact that anyone is citing an “M&A hangover” as an explanation for why M&A pace will slow is fascinating.

Back in June of 2018, with one legal decision, many, many, many, many articles claimed a tsunami would wash ashore in Hollywood. So far, we’ve seen roughly the same pace of M&A, given lots of noise, as always. I’d point out my prediction that M&A wouldn’t see a huge surge was mostly proved correct. I’m still waiting for the next 11 figure deal. I’ll probably check in on that in numerical terms in July.

Media Thought 1: Where are the “2018 Entertainment M&A Years in Review”?

Of course, I’ll only really check in if articles come out from Thomson Reuters/PwC using similar methodology to the other ones I cited. Notably, I haven’t seen the “M&A in entertainment in 2018” articles I expected to find. And I’ve googled on this a fair bit. I don’t have a theory for why we haven’t seen this yet. Maybe M&A enthusiasm in consultancies peaked in midyear? Otherwise I’m flummoxed, but will keep searching.

Media Thought 2: Coverage and Price and Impact Aren’t As Correlated As You Would Expect

I mean, they are clearly somewhat correlated. When AT&T bought Warner Bros. and Disney bought Fox, those were HUGE deals that were widely covered by everyone everywhere.

But at the lower levels, I don’t see the same strong correlation. Spotify buys two podcasting companies, and everyone is talking about it. A combined deal that nets out at $300 million. Then I find out Apollo Global Management is buying Cox’s broadcast stations for $3 billion, and it gets covered, but not as much. That’s an order of magnitude higher in cost, and probably got an order of magnitude less coverage.

I can explain why, narratively. Spotify is buzzy, whereas broadcast is a slowly aging dinosaur. Also, by market capitalization, arguably Spotify is a big company. With these two purchases, Spotify is building out its strategy to reinforce its current leadership (though as I type this, is this true? By what metrics? In what countries?) in music streaming by moving into all audio. Hence, that news was as big as the merger.

I could pull other examples. SiriusXM, which has both pipes and streaming, bought Pandora for $3 billion, and that probably got less coverage than Spotify’s acquisitions. This is just my perception and Google Trends data didn’t help answer definitively. (Too many people just look up streaming music via Google.) But these handful of deals provide enough initial evidence to me that coverage of M&A does differ from the potential impact of M&A. Yes that’s my opinion forecasting the potential impact of deals, which is naturally very tough to do, but as I’ve been monitoring M&A news, it’s my initial conclusion.

Business folks concerned about the real long term trends, as opposed to the perception of long term trends, need to understand this bias. The buzzy stories that get clicks on entertainment websites and even business sites like The Economist and Bloomberg may not actually relate to the true impact on the future of entertainment.