I should call this a round up of the last two weeks. Even though I got my column out on time last week, I had a lot of spill over ideas. So many stories that they bled into this week’s edition. (Which is late again.) Business-wise, the entertainment press had two stories dominate the news in the week of December 7th, one which matters and one which doesn’t. But first, our holdover article, with a key lesson.

The Most Important Story of the Week – Youtube Kills Original Programming

That’s a deliberately provocative headline not quite captured by, you know, the truth. But clicks, am I right?

In reality, Youtube is quietly pulling back from original programming. Or shifting their strategy to premiere originals on their ad-supported platform (just Youtube) instead of their subscription service. Along with this move will come a likely decrease in their overall spend and spend per show.

But I do want to push back on what I see as the implicit assumption that “original programming = success”. Just making your own shows doesn’t give you a competitive advantage per se. It isn’t a panacea to all the problems ailing your business. This is another example of executives not being creative, but simply asking, “Well, what are they doing?”

That’s why I think economically-minded companies, like Youtube presumably, may pull back on original programming if it doesn’t work right away. Maybe they do have a flashy hit–like Cobra Kai–but the costs for that and the 10 to 12 other series may not cover their bills. In that case, you pivot away from original content. I’ve been bullish on Youtube for awhile, and I think the more they focus on Youtube and YoutubeTV, the better and more coherent their offering.

If you read Stratechery, you’ve seen Ben Thompson has his “aggregator theory” that I love. My only quibble is I’ve never understood why he applies this to Netflix as opposed to Youtube. (He actually does both.) Netflix is specifically not trying to aggregate it all, but Youtube is. If you have it all, you don’t need “just a little bit more”. You’ll get it eventually. And that shows why Youtube probably doesn’t need original programming.

Long Read of the Week – Youtube and The Pressure to Publish

While I’m on the Youtube train, I want to call out this article on Variety by Todd Spangler that has been sitting in my “to read” list for a while. I don’t have a ton of insight except that Youtube has problems that seem unique to it in the video world. Netflix is going to compete very traditionally with the big studio players by making big shows and streaming them. It’s just a different channel.

Youtube has to deal with, basically, it’s algorithm. The algorithm pushes people to extreme content. Or it burns out creators. Or it caters to children. Or it is addictive. It’s a fundamentally different problem that is both easier (fixing algorithms is easier than dealing with people) and harder (it cuts directly into revenue) to solve.

For those who don’t know, AT&T announced a giant pay per view golf match between Tiger Woods and Phil Mickelson. Since AT&T now owns Bleacher Report, they had the genius idea to have an option to purchase the event on BR too. Of course, the BR website crashed, so they offered it for free to customers, which bugged anyone who paid for it. So refunds were issued.

These refunds won’t bankrupt AT&T, and it looks like they’ll plow ahead with future PPVs in golf. Also, I don’t think this story portend some huge change for how we consume video content. So why was it almost the most important story of the week?

Because it provides such a great lesson on the relationship between “content” and “product”.

The lesson is one I’ve hit on a handful of times but will really emphasize going forward: product matters. Yes, content is king, but your product is right there. If the process to watch content is maddeningly difficult, then customer will find other ways or not watch. Content is king, but product may be the Queen. Or at least a rook.

Other Contender – Netflix keeps friends for $80 or $100 million, non-exclusively

If you follow the business of entertainment, you might have missed stories about the Pay Per View going awry or Youtube changing its policy on originals. There is no way you missed the news that Friends was set to leave Netflix in January and Netflix is paying up to $100 million to keep it, non-exclusively.

Others have tried to explain what happened here, but I’ll echo The Ankler in being dismayed at how badly AT&T is playing this game. Imagine a world where The Office and Friends leave Netflix in 2019, after a lot of shows already left in 2018, including the 21st Century Fox shows like Family Guy, It’s Always Sunny in Philadelphia and How I Met Your Mother. What if–God forbid for the stock price–Netflix subscribers then stayed flat for Q1 and Q2? The strategic ramifications would be devastating.

Instead, Warner let them pay $100 million. Or, 1/20th of their recent bond offering. Honestly, AT&T, you couldn’t have asked for half a billion or more? So yes, Netflix won this round.

When I say lots of news with no news, this non-event could be the perfect example. Honestly, how does not having a host for the annual parade of Hollywood stars winning awards impact the business of entertainment in the long run? Not very much. I understand why the public at large wants to read about it, but it won’t change the future of this industry very much. So avoid the coverage as much as you can while focusing on stories like the few above.

I’m one of the few people in Hollywood who thinks the Academy Awards should feature more popular films. Popular are often better than critics give them credit for, and these awards are supposed to be about all the movies, not just critical darlings. This is part of the reason I spent a lot of time in August researching the data behind Oscar winning film and how the films nominated have become increasingly obscure since the Academy expanded the awards categories back in 2009.

Yet, change may be coming. Two articles in recent weeks brought this topic back up. In THR by Gregg Kilday asked if we should reward movies like Paddington 2, which was just enjoyable. But the article that really intriguied me, was in Vox by Todd VanDerWerff, where he asked if the Oscars will just happen to represent more popular films, so we don’t really need any changes. Overall, I am skeptical it will happen, beyond Black Panther.

Why skeptical? Because the Academy Awards Nomination Machine will not rule it so. Besides Black Panther, I think the other “popular films” mentioned may not make it through. A Star is Born will get a nomination, and it got nearly $200 million in domestic box office, but even something like Mary Poppins Returns will could end up getting shunned in favor of a very obscure psuedo-independent film. Here are the current Best Picture odds on Gold Derby, with the current box office: 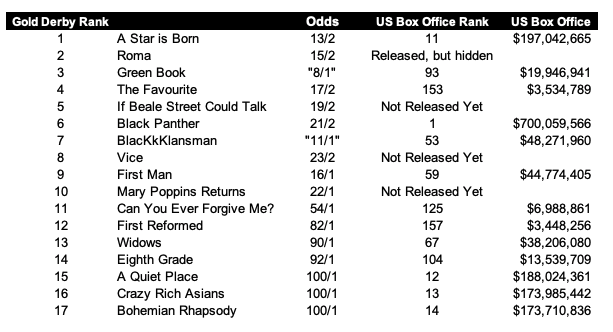 A lot could and will change between now and January 22nd, when nominees are announced. Including several movies on this list being released in theaters. But besides the over-the-top success of Black Panther, the overall trendlines continue. Only three of the current odds-on nominees would be popular films, which I defined as grossing more than $100 million dollars domestically. That matches exactly last year’s number! Having one genuine blockbuster, though, would be an improvement. I just doubt this represents a trend versus a collision of unique forces, making this year an outlier.

More to come on this in future weeks.

Every so often an article pops up and you have to read the entire thing immediately, which was my case with the NY Mag piece from Yves Smith, who writes at Naked Capitalism. They are bearish on Uber for the same reason I am: Uber is losing lots and lots of money. And unlike a lot of digital-only companies, Uber has real world costs that it hasn’t figured out how to make go away. Except by squeezing drivers.

But the context seems to be that many companies in the digital future are all losing a lot of money every quarter. Of the top of my head, Uber, Bird/Lime, WeWork, Tesla and Netflix. That’s a lot of investment for not a lot of return. Is this sustainable? And if suddenly the cash runs out–say the stock market keeps diving–what happens then?