Les Moonves is Out

Hypothetical question: in any given week, do more people in America watch CBS or Netflix?

Think about it for a moment, but  you know why I’m asking: the firing of Les Moonves is the most important story in entertainment. Absolutely for last week, definitely for the month and in competition for the year. I almost put some other articles that were overwhelmed by the news cycle in today, but the Moonves/CBS thoughts went long. Tune in Friday for those other ideas.

Here’s a bad data approach to comparing CBS and Netflix. One I expect anyone answering Netflix would use. Grab CBS’ highest rated show–The Big Bang Theory–and note that it had 18.6 million viewers. Grab Netflix has about 55 million plus subscribers in the US. Since 60 is greater than 18, Netflix wins!

We don’t know Netflix’ highest rated show. So we can’t continue our comparison that way. But we do know CBS subscribers, since it is a broadcast channel featured in nearly every cable package, if we know the universe of TV viewing homes–via cable, broadband, satellite or over the air–we know it’s subscribers. That’s a number of something like 95-100 million households. (Note: I’m not counting Showtime or CBS All-Access subscribers either, since I don’t know the crossover.) Thus, the question hinges on the number weekly viewers as a percentage of total subscribers. If 100% of Netflix subscribers watch every week, then CBS needs only 55% of its potential audience to tune in. In other words, CBS has a huge head start in this hypothetical.

If I had to bet, I’d bet on CBS. And that quiet difference between the perception of Netflix and the performance of CBS says a lot about the entertainment industry as we head into the 21st century. Netflix may be the future, but CBS made a lot of money the last few decades as the number one broadcast channel.

Before I go on Les Moonves’ tenure as head of CBS, let’s provide a couple of caveats.

I would really like to dig in deeper to the numbers behind Moonves’ tenure at CBS. But even something like CBS financial performance isn’t something I’ve studied in-depth. So as a reminder, this is my “gut” thinking as opposed to an analysis. (See the explanation for the difference here.) I’ll pull some data and links, but not a full-blown analysis.

Caveat 2: This is from a business/strategy perspective.

Following the financial crisis, the big question for business schools was ethics. Should/does business have any? Being a card-carrying liberal, in that tradition, I think it should. Conservatives in the religious sense should tend to agree. Only soulless free-marketeers would disagree. That said, today I’m writing about Moonves’ impact on the entertainment industry, and that means evaluating his performance by largely ignoring the ethical and social implications of the #Metoo movement. More importantly, others have written about it better, and my goal isn’t to echo good ideas, but to create new ones.

Regarding Moonves in particular, if a CEO commits unethical and/or illegal behavior, he needs to be fired without pay. A strong, independent board of directors should facilitate that based on a fair reading of the evidence. It’s pretty clear where the evidence led in this situation so despite his success, he shouldn’t be at CBS anymore.

If you created a word cloud to describe CBS in the popular perception of Hollywood, you’d get something along the lines of…

Here’s the thing: that’s the perception, but is it the reality? Was CBS successful in middle America? Sure, but his shows were still among the most popular shows in LA and New York. Was CBS only successful among lower class viewers? Maybe he over-indexed there, but you’d be surprised how many wealthy people watch CSI or NCIS or Blue Bloods. Were their shows popular and hence lowbrow? I think this is fair in that critics couldn’t wait to pan most of CBS shows, but The Big Bang Theory is an awards juggernaut. (Which is a conundrum. You can’t call the Emmy voters out of touch when they vote The Big Bang Theory or Modern Family, then praise them for awarding Transparent or Veep.)

Les Moonves success as a TV executive mostly went unremarked by TV critics. Or at least it wasn’t a buzzy topic. Being popular tends to make you “unpopular” with critics, so CBS was generally not buzzed about. Or at least less buzzed about compared to the coverage of Netflix, Hulu or even Amazon Studios/Prime/Video during awards seasons.

CBS appealed to the masses and by doing it so it managed to be popular with just about every group. Not everyone, but every group. Since The Big Bang Theory and the NCIS/CSI families were super popular, they were popular across almost every demographic, geographic and social category you could find.

Why don’t we know this as a business community? Well that will take some time to explain, but to summarize, poor segmentation driven by “over-indexing” means that the entertainment business tends to stereotypes certain networks/companies.

(This little section inspired two future articles for me: 1. “Indexing…Explained!” and 2. An analysis of CBS to find the data or lack of data supporting the CBS stereotypes.)

The watchers of the media world weren’t focusing on CBS, so it kept accumulating viewers even if it wasn’t accumulating reams of Emmy and Golden Globe awards. This is a very “gut” statement, and I hope to do the analysis on it, but it seems like every season CBS trotted out successful new shows to replace the ones leaving, across both drama, comedy and reality. If we charted out all the successful broadcast/cable shows in the 2000s and 2010s, we’d see that Moonves/CBS shows would take an out sized portion of the top 20% of shows. Given the logarithmic distribution of returns (so excited to use that already!), that means he had an outsized impact in creating hugely popular shows.

That’s why I call him a hit maker. Moreover, I didn’t realize until this week he was at Warner Bros. television during the dawn of Friends and ER. He really did seem to have the talent to make hit TV shows. Or at least identify those people who could make hit TV shows.

(This section is just the tip of an iceberg for a third article I’m writing, this one on “development executives” and how many hit makers there truly are. It’ll be fun and super controversial.)

The only caution to all this is the idea of “network effects”, which isn’t quite the right word, but close enough. Network effects are when a business that has a network gains additional benefits as the network grows in size. Facebook or Amazon Marketplace are the best examples; if everyone is on Facebook, you benefit more from joining the social network; if everyone is selling on Amazon, customers go there more often to buy things.

In TV, though, “owned-and-operated” media is the one place where size can beget size. So if you’re launching a new TV show, would you rather have Comedy Central advertising it to it’s hundreds of thousands of viewers, or CBS advertising it to the millions of The Big Bang Theory viewers? You want to be on the latter, which means it can be easier to launch new TV shows. CBS definitely benefited from this effect, but it can’t explain all of CBS sheer dominance.

Pretty simply, the CBS board would have backed Moonves against the Redstones in the takeover. Now I can’t see that happening.

4. And I would agree with this merger from CBS’ perspective.

Clearly, I hate industry consolidation. But I hate it because it is a prisoner’s dilemma: if everyone else is consolidating (instead of growing by adding value), then everyone has to consolidate. If you don’t, as your competitors grow, they can use size as a weapon to negotiate with buyers, suppliers and customers. That’s bad for customers, and for the remaining small firms.

An independent CBS would have been fine with Moonves. Probably. Then, CBS could have bulked itself up to prepare for the impending “streaming wars”. Without Moonves, CBS really risks becoming an also-ran. Moonves was a hit maker and I have no guarantees his successors (whether in the CEO role or as head of development) will have the same ability. If his successors are just average, overtime the network effects will wane and CBS will go away. Instead, I’d recommend that CBS join Viacom and let size help them negotiate.

5. Who will step into the CBS void?

It doesn’t have to be another broadcast channel. It could be, but no network has shown they have a reliable hit maker. It could be a cable channel, but again, no obvious examples jumps to mind. (If this were the mid-2000s, I’d have bet on USA, but they’ve under performed compared to their 2000s performance.) It could be a streaming service or premium cable, but only Netflix has flirted with popular programming for popular sake. The downside with Netflix is that their hit rate could be the lowest in the industry, which is the opposite of “hit making”.

Or no one. There isn’t a law that one channel/platform has to rise up and achieve dominance. But if a streaming/cable/broadcast platform wanted to seize TV market share, now is the time. If you have a hit maker, you could take CBS place.

If you run a content company, do you have development executives willing to risk industry scorn for making popular shows that don’t appeal to critics? A lot of money and market share can be won by making popular things.

I enjoyed a few reads this week.

To start, listen to the emergency banter with Kim Masters and Matt Belloni of The Hollywood Reporter and KCRW on The Business. Alway worth a check in, and in their banter from this week on reporting on CBS board.

Next, The Ankler’s Richard Rushfield published in Vanity Fair about Hollywood protecting powerful men in Hollywood, with the flair he usually writes with.

I said others wrote better about the larger #MeToo explanations, and I’d point to Todd Vanderwerff at Vox (my go to general news site right now) as the best example.

Finally, I’d point out Joe Adalian’s piece for the “CBS will be fine” narrative that I sort of challenge above. That said, I’m simplifying Adalian’s poin. He has faith that CBS is the work of a few people, many of whom could have absorbed Moonves’ style. 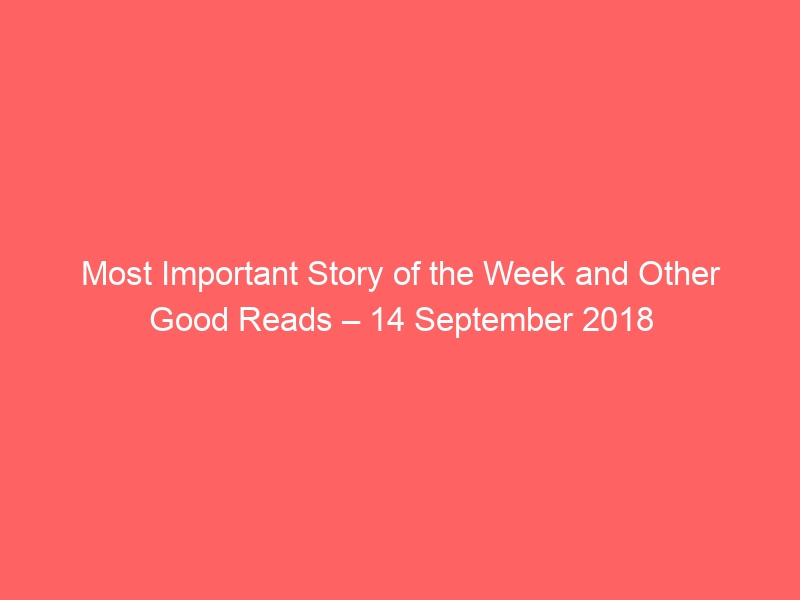