Tomorrow, I’m going roll out part one of a potentially four (or more) part series analyzing The Walt Disney Company’s acquisition of Lucasfilm. I’m going to ask a simple, yet tough to answer question, how much money did Disney make off that deal?

When I launched this website, I decided specifically not to call it a “blog”. And I don’t want to call it that because of that article coming out tomorrow. And I want to explain why.

Since I left my last job, I’ve been thinking about writing about the business of entertainment. Specifically, the strategy of entertainment companies, defined as the decisions they make and the quality of those decisions. I selected this vague area because in my analysis of the entertainment journalism landscape, I didn’t really see anyone covering it.

Trade goings-on? Covered by Variety and Hollywood Reporter and others.

Statistics of entertainment? A lot of statisticians dive into that field with websites.

Strategy of technology? Obviously StraTECHery has us covered.

But analysis and explanation of the strategy of the entertainment business? I just don’t see enough of that on a regular basis.

I had a ton of ideas for smaller articles. I’m calling those my idea posts and they’re most similar to what an old-fashioned blog was: a bunch of posts going up on a variety of topics with my opinions. Some of these will be on the business of entertainment, or industry trends, or recommendations or explaining updates to the site or even vaguely political posts (if the politics impacts the entertainment industry, and it does). But those ideas aren’t enough to distinguish me in an already crowded entertainment journalism landscape.

I also know people love updates on the news. I could try to distinguish myself there. But honestly, I’m not good at devouring news constantly and spitting it out. That said, I do read a ton, and I get thoughts. So on a weekly basis I’ll put out a review of the news of the week, with my own spin on the most important stories.

Still, that’s not enough. Which is where “analysis” articles come in. These are the magazine pieces of this website and hopefully the centerpieces for why entertainment execs—senior, novice or aspiring, creative and business types, all are welcome!—will come here. I’ll take big questions and try to answer them analytically, in a readable style. My first one goes up tomorrow, and it’s a fun question with a lot of serious learning points and deep analysis, that ends up touching on the future of the film industry.

Big Questions: I’m starting with this tomorrow, which is a good example of a big one, “How much money did Disney make on the Lucasfilm acquisition?” It requires running the potential financials on four different lines of business, and will allow me to explain the economics of feature films. Other ideas in this category are “How does Netflix value original content?” and “How much should Disney charge for its SVOD platform?” In each case, I hope to explain how I got my numbers so other people can learn from it.

Versus: As I was brainstorming potential topics, I started thinking of companies to compare to each other. Sort of like a preview of a football or basketball game, but for entertainment companies. And instead of a one off match, it would predict out the next two to three years. Once I started, I came up with a ton of fun ideas like, “Who won the deal, Disney or 21st Century Fox?”, “Who has a brighter future, Atom Tix, Fandango or Movie Pass?”, “Who should Vox sell a TV show to, MSNBC or Netflix?” or “Who did better Grantland or The Ringer?” Really, the sky is the limit and I want to compare everyone from Snapchat to Twitter to NBC-Universal to Warner Brothers.

Power Rankings: So since I”m already declaring winners above, my next idea is a natural extension of that. I’m going to rank companies in different areas as I come up with topics. The key will be grounding them in specific numbers, and that’s the hardest part so far, but could be the most insightful. I’ve come up with a few fun ideas including “Streaming Services”, “Franchises” and “Kids Platforms” and we’ll see how many more I can do and how long they take.

What “Analysis” articles will include

What can you expect from analysis articles (assuming they don’t kill me in the meantime)?

First, numbers. One of my future themes will be “strategy is numbers” and one of the most frustrating things for me when reading coverage of entertainment is the willingness to ignore numbers when proclaiming a winner in strategy (especially with Netflix). That’s why I’m going to try to push the questions to always having a financial winner or loser, if I can. Hopefully, this is grounded in really good data, though that depends on what I can find.

Second, learning points. As I was writing my first few analysis pieces, I felt the need to explain parts of entertainment business models. These are things I just don’t think a lot of people know and even I learn more about as I do them. So I’m going to explain what I know often to explain how I’m coming to my conclusions. I think it will make us all smarter.

Third, they’ll be long. In a previous writing enterprise, I tried to keep blog posts to under a 1,000 words which meant I often did series of articles on topics. I’ll still break up analysis articles, but often times the whole article will be several pages long. Again, much more like a magazine article than a blog post. In the end, I may collate the entire thing into a pdf for readability.

So how often will these articles come out? Probably weekly, with occasional breaks. I have the first two mostly written, but they are tremendously long so will come out in parts. Hopefully over time I can shrink that length.

To be fully transparent, in the future, I may hide these analysis articles behind a pay wall. Or only allow access to people who give me their email address (and some data). Why? Well I need to make money on this writing and if my gut is correct—I think this articles could be popular and/or the most valuable piece of writing I have—then it would be a good way to monetize the site.

Overall, I’m really excited to get started with these analysis articles. They’re the most exciting things I’ve worked on in a few years related to the business of entertainment. I get to improve my skills at analyzing other entertainment companies, and I get to do it outside of a corporate context. (And a consultant context.) Which means I don’t have to deal with the opinions of a lot of senior people biasing my outcomes.

Also, I get to learn a ton more about how different businesses operate. Stuck inside a company, you get very myopic. Plus, there is something about reading news reports on a company, and something else trying to dig into a company in detail. The “versus” concept in particular has allowed me to compare two companies with something interesting linking them.

Finally, I get to hone my process. I think we all need to make better decisions, and analysis articles are my way to do that.

I hope you enjoy the first of many to come. 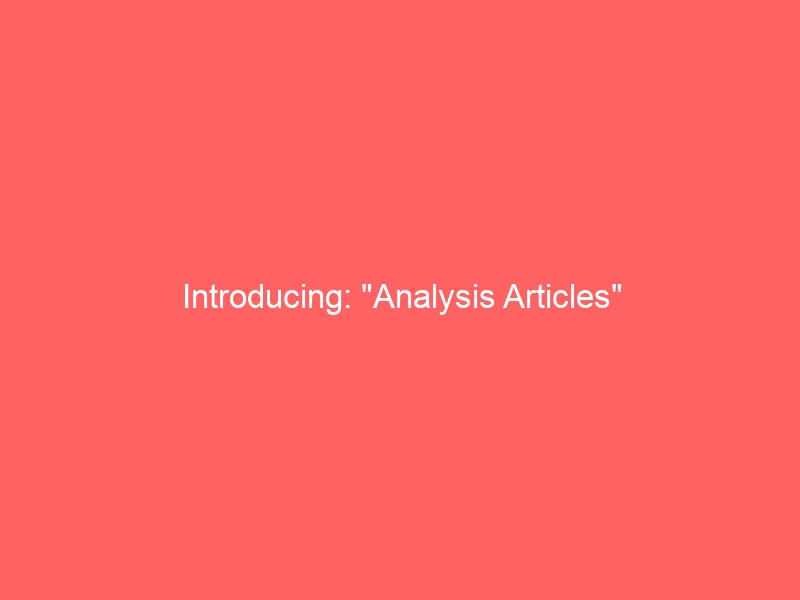