Every so often, as I pull data for a given article or to make a point, I come across a database that’s worth exploring further. (Which is why I created the “visual of the week” feature!) For example, in 2018 I stumbled across The-Number’s home entertainment data for the United States. More specifically, the number of physical discs still sold to people in the US. (Both DVDs and Blu-Rays will be called DVDs in this article, but are both “physical discs”n.)

I’ve since used this data for various projects over the last year or so. Once, when I was trying to figure out how many DVDs Game of Thrones sold during the course of its lifetime. (A lot!) I’ve since used it to look at various blockbusters to refine my film finance model. Recently, I’ve been looking at Christmas movies. (Next week!)

This isn’t some esoteric data point, though. In 2020 Covid-19 made home entertainment the only window available. Then, Warner Bros smashed the theatrical window altogether. Thus, importance of this aging technology to film financing couldn’t be more important. We’ve all know we’re trading “physical dollars” for “digital pennies”, but what does that mean in practice, as opposed to slogans? Specifically, what are the numbers that implies?

So that’s the quick topic for the day. As always, the 5Ws of the data: 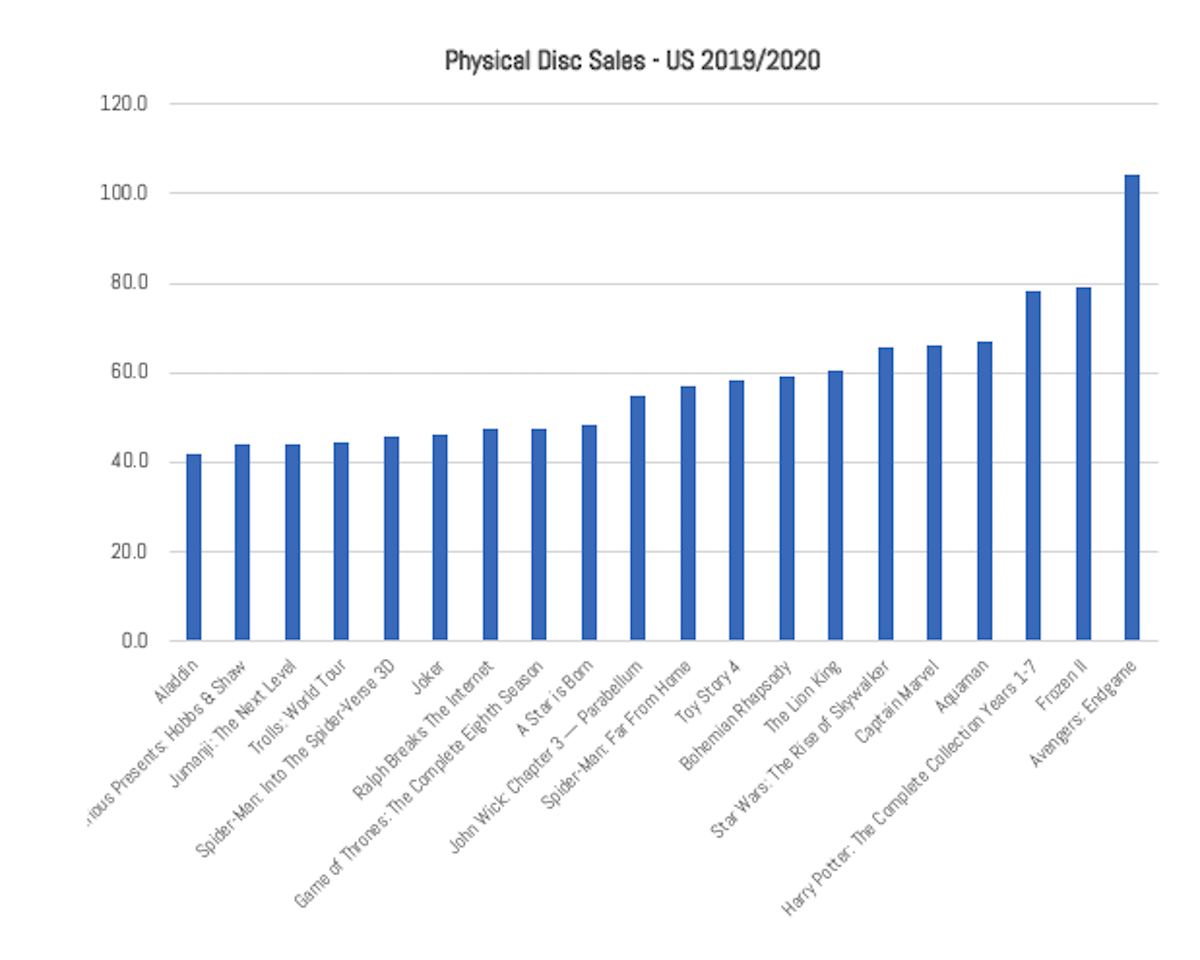 (All data in millions of dollars.)

To answer my headline, Frozen II sold 3.6 million physical discs in the United States, leading the pack for any film or TV series this year. Avengers: Endgame won 2019, with 4.8 million sales for $104 million dollars. (And Frozen II could catch Avengers, since they year hasn’t ended and my data set for 2020 only goes through mid-2020.)

Let’s run through some fun insights, though with this dataset:

– People still buy DVDs. Again, even in an age of streaming, when folks could sign up to Disney+, 3 million families in the US alone bought a DVD for Frozen II instead of watching it there.

– DVD sales aren’t films only. TV has always had a spot on the list. Here’s a rough categorization of how film sales looked in the last two years or so:

– Yes, that’s right, in the United States with just physical discs, the big studios sold $2.4 billion dollars worth of discs. Yes, studios don’t keep that whole price, but that’s still a lot of extra money for each film. (Say about 40% of the price, or $10 for a film.) And this just physical home entertainment, a shrinking market. Electronic sales are now a much bigger piece of the pie. (That I don’t have similar revenue estimates for…) So each of these films could add about 8-10% more revenue to their total revenue. When this market decays to nothing, that revenue likely goes with it. 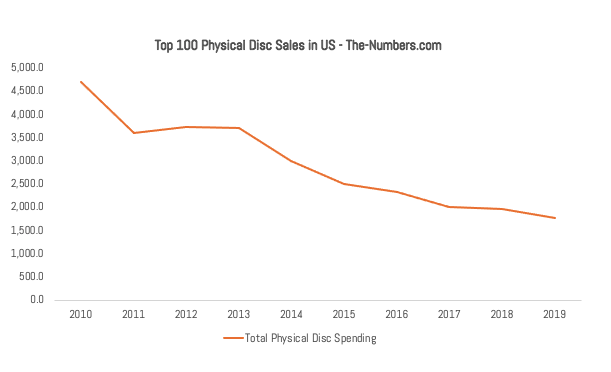 – And yes, this market is also logarithmically distributed. Thousands of films sell less than a million units a year, whereas Avengers: Endgame sold over a $100 million dollars.

PrevPreviousThe Top Four Licensed Shows on Netflix Account for 6% of Netflix’s Viewing in the US
NextHas Netflix Lost Ground Since the Pandemic? Using Reelgood’s Share of Streaming Data to Find OutNext