Netflix is a Broadcast Channel Part I

One of my big frustrations with the “debate” over Netflix is how little we know. That’s a gripe I share with a lot of folks.

One of my big frustrations with coverage of Netflix is how seldom folks try to step into the gap and estimate data points for Netflix. In this gripe I’m mostly by myself. I understand that some journalistic outfits can’t do this. They can only report facts or estimates from other established firms.

But I won’t settle. If Netflix won’t tell us how many folks watch their programming, then I’ll take things into my own hands. (See Ted Sarandos’ latest on Reliable Sources. All he said was “Viewership is ‘up”.) I just need enough data to make my estimates reasonable.

And guess what? Over the last three months I think I’ve collected enough.

Normally, at this point I’d launch into a bit of a strategy lesson. I mean, it’s right there in the name of this website. Instead I’m getting right to my results. I’ll put my “Bottom Line, Up Front”, what this is, why it’s a good look and then how I calculated it. Then in my next article, I’ll analyze some implications from all this data, and finally my strategic lesson for folks out there.

Bottom Line, Up Front  – My Estimates for Primetime Viewing

Here’s my prediction of the top 20 “channels/platforms”—across both linear and streaming—in Primetime (8-11pm) in the United States, as measured by “Average Minute Audience”.

Why use “average minute audience”?

First, because it isn’t subscribers, which is the numbers we most often see reported. (And duly covered by me, for example here or here or here.)

AMA is pretty damn useful because it captures actual usage, not just folks who are subscribed to a service, but don’t use it. While AMA can have wild swings—for example live sports skew ratings heavily—over 365 days it absolutely evens out. In other words, it’s a pretty good sample of the average amount of usage.

I’d add, the business rationale for tracking both usage and subscribers is because they are a chicken and egg problem. If you have lots of subscribers, but they don’t use the service, they’ll quit being subscribers. And if you have lots of usage, that ends up getting more subscribers. (Meanwhile, coronavirus is going to screw all this up as the old models of usage to sub growth will be pretty inaccurate during this time of crisis.)

Here’s a fun example. Who has more subscribers, CBS or Netflix? Well, CBS obviously. Through all the linear cable channels. (If you count those as subscribers, and they do pay a monthly fee, even if they don’t know it.) But since usage is declining, so is linear channel subscriptions.

How the relationship between usage and subscribers evolves overtime will have a big impact on how the streaming wars progress. We have subscriber numbers for the most part; AMA balances it out nicely in the interim. (Though if I had a preference, I’d just prefer total hours consumed by streamer and linear channel.)

The other main reason I used it? Well, it’s the data I have. So you use what you have.

How did I pull off this feat of estimation? Let’s go step by step through it.

One. Every year Michael Schneider releases a roll up of every channel by average primetime minute audience. This means for the 3 hours of prime-time (8pm to 11pm) he averages how many folks watch by every single channel. That gave me this chart of the last four years, since he linked to his past columns at IndieWire:

Two. In February, Nielsen released their “Total Viewing Report” for 2019 Q4. They then released some juicy nuggets about streaming and Netflix’s share of viewership. Covered in every outlet possible, here’s the pie chart from Bloomberg converted to a table:

Three. In another scoop, Michael Schneider in Variety got the weekly Nielsen streaming data on a show-by-show, top ten basis, which we hardly ever get:

Second, make an estimate between the first two sources.

This actually just becomes a math problem. To start, I calculated the total viewing of primetime shows each year. You can see on the top line of the 2016-2019 chart that I calculated total viewership year over year, and it’s decline. With Nielsen’s estimate that streaming is 19% of viewership, we can combine these two estimates:

That gave me the table above, which I’ll post again because I love it so much…

Third, make some margin of error.

See, Netflix has in the past estimated they are 10% of TV viewing. So I wanted to give them their due and put the number out in case that’s closer to reality. So that number made it in as the “high case”. In this case, Netflix would surge past CBS and NBC to 9.4 million AMA on average.

Of course, I’ve also heard that Netflix has something like 60% of their viewing is kids or family content. While this doesn’t show up often in their season data, you see this in their film viewing. So if I were estimating total Netflix usage, I’d consider lowering the primetime ratio down a bit, say to 4%. This would mean that Netflix severely under indexes on primetime viewership because it is essentially a kids TV platform. This would make Netflix’s primetime AMA around 3.7 million.

This is where Michael Schneider’s latest Nielsen scoop in Variety comes in. In his latest scoop, he got the top ten ratings by “average minute audience”  from the first week of March for both Amazon and Netflix across a range of originals and films.

We can use these weekly snapshots to evaluate our previous estimates. Because if the top ten had multiple shows in the high 8 digits of viewership, then obviously way more people are tuning in nightly than *just* 5.5 million per night. And since I unveiled this article, well you know the math doesn’t add up. First, here are Nielsen/Variety’s charts, converted to Excel so I can “math” it.

If we add up each of the 30 Netflix data points, we get 34.8 million AMA. Which is way higher than my 5.5 million per night. But…this viewing was spread out over 7 days. Someone could have watched multiple series each night. On a streamer, there isn’t a constraint on viewing. Since this is 7 days of data, at a 5.5 million AMA we’d have expected about 38.8 million. That’s pretty close to the 34.8 we actually had. This is why overall I think my methodology is pretty accurate.

But I have some huge caveats.

First, this is seven days of around the clock Netflix viewing. Which is way more than what Michael Schneider was tracking in his “top channels” run down which is strictly a primetime measurement. (8pm to 11pm) So if we’re trying to balance the books, we’d need to draw down the Netflix numbers to account for non-primetime viewing. Try as I might, I couldn’t find a good data source showing Netflix viewing by time of day.

Second, you could also point out that these 30 shows weren’t the only things available on Netflix. What about all their hundreds of other shows?

Good point. So here’s a table of the Netflix shows whose data we do know.

What should jump out at you right away? The logarithmic distribution of returns. In other words, in the content game, the winners aren’t just a pinch better than the others, but they are orders of magnitude bigger. We see that starkly here. Of just these 30 pieces of content, a plurality had less than 500K AMA and a majority had less than 1 million.

But we know that’s far from all the content Netflix has. They’re a machine churning out, according to Variety’s estimates 371 new TV series in 2019. That’s in addition to a hundred plus original films.

Why does this matter? Well, I made my own estimate of the rest of Netflix’s viewership based on these trend lines. Here’s how that looks:

In other words, even though Netflix has hundreds of other shows, they don’t really impact the ratings after the launch. Likely the majority of series launched on Netflix last year average a ratings-wise insignificant number of views. (Say 10-25K per week. Or less.) If you have 300 shows earning 10,000 views a week, that’s only a 3 million AMA. Which would bring the estimates above right in line.

In other words, after my sanity check, I think my nightly AMA number for Netflix looks pretty good. Arguably the primetime only numbers would bring it down—meaning I was too high—but the other not included shows would bring it back up. And likely still a majority of adults watch Netflix at primetime, regardless of anecdote about binge watching at all hours of the night.

So that’s my data estimate of the day. But what does it mean for Netflix?

Next Time and My Data

Let me be honest: if you unleash me on a data set like this, I generate way more insights than just this one article. In my next article, I’ll run through some implications and provide a piece of strategic advice.

Also, I built a fun Excel for this. It’s not super complicated and you could go get all the data yourself if you wanted. But like I’ve done a few times before, I’m going to give it away. The price? You have to subscribe to my newsletter at Substack. It goes out weekly if I don’t have a consulting assignment; once or twice a month if I do.

Email me from the email you subscribe to the newsletter with, and I’ll reply with the Excel. (Email is on the contact page.) 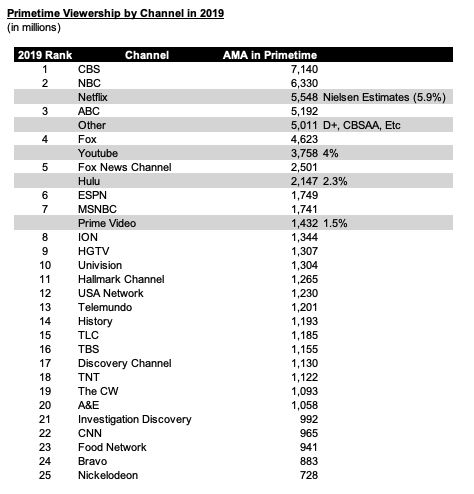